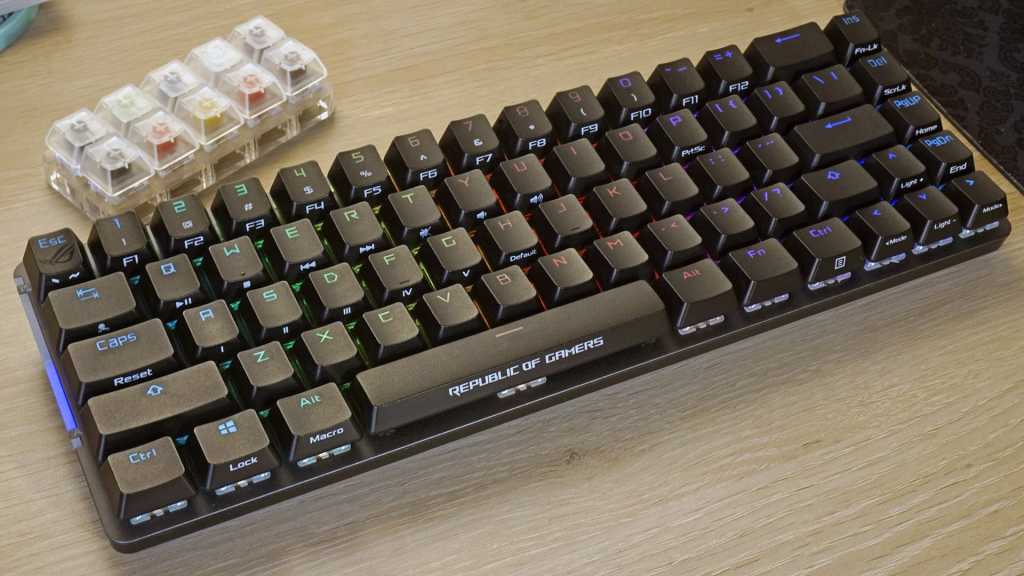 IDG / Michael Crider
At a Glance

The Asus ROG Falchion has a smart layout and long battery life, but its high price and lack of customization options hold it back.

Tiny mechanical keyboards are all the rage at the moment. But the ones from gaming companies like Razer and Corsair try to be everything to everyone: ideal companions for both desktops and mobiles. Asus is taking a more focused approach with the ROG Falchion. With an RF-only wireless USB connection, it’s laser-targeted at PC gamers.

The Falchion should look familiar if you’re a mech keyboard enthusiast. It’s using the unofficial “65 percent” layout, with one extra column of keys beyond the absolute minimum alphanumeric arrangement. This gives it just enough space for a full arrow cluster—a must-have for many users, particularly gamers.

It’s got the touch

But the Falchion also has a hidden trick: a touch-sensitive strip on the left side of the case, cleverly concealing volume controls. This is a smart addition for such a small keyboard. The strip is illuminated. When you touch it, the light indicates volume level while you make adjustments. When not touched, the light indicates battery level.

Speaking of battery, in my testing it went from 100 percent to 20 percent in under two days with full RGB lighting on, at my typical 8-10 hours a day of use. At the 20 percent mark the board shuts off all lights except the battery indicator, and the software reported that it stayed at 20 percent for a further five days. Given the product’s quoted 450 hours of non-LED use, and my own personal experience with wireless keyboards, I predict two to three months of use at 100 percent battery with no lights.

Unlike other premium wireless gaming keyboards, such as the Razer BlackWidow Mini, the Falchion is limited to an RF wireless connection, as opposed to offering both a USB dongle and Bluetooth. As a result it’s not as flexible nor compatible with tablets and phones.

Since Asus positions the Falchion for gaming, it presumes you’ll be using the keyboard with a desktop PC or a beefy gaming laptop that doesn’t lack for USB-A ports. It’s a bold gambit, and one that might rankle a few users who want to take their wireless keyboard on a Starbucks run.

Asus uses Cherry MX switches for the Falchion: Our review unit featured linear Reds, which makes sense given its gaming focus. Hot-swapping switches is not an option. The package also includes the dongle, USB cable, USB C-to-A adapter, and a plastic tray that can protect the board in a bag. When not used to protect the keys, the tray can be reversed and attached to the bottom of the keyboard, with cutouts for the ports, power button, and touch bar. Personally, I’d prefer a standard neoprene case for protection, but this case is better than nothing.

Typing on the Falchion was smooth and reliable, with a nice angled lift provided by folding keyboard feet. Gaming on the board was also satisfying, without any noticeable input lag.

The big drawback for this small board is the software. While Asus’ driver package offers myriad options for both lighting and macros, all stored within the keyboard’s local memory, the software doesn’t allow you to modify the function layer or move the Fn button. Parts of the software seemed unfinished. To wit, the software is serviceable for gaming— though notably inferior to alternatives from Razer, Logitech, etc.— but it’s very bad if you’re looking for more complex programming for regular work tasks.

The Falchion isn’t cheap at $150, and its lack of flexibility in connection, switches, and programming isn’t doing it any favors. While I appreciate the carrying case for travelling, leaving out the Bluetooth connection means it’s a hassle to use with anything but a larger laptop. Unless you really love that touch panel for volume controls, there are better choices out there for small gaming-focused boards.