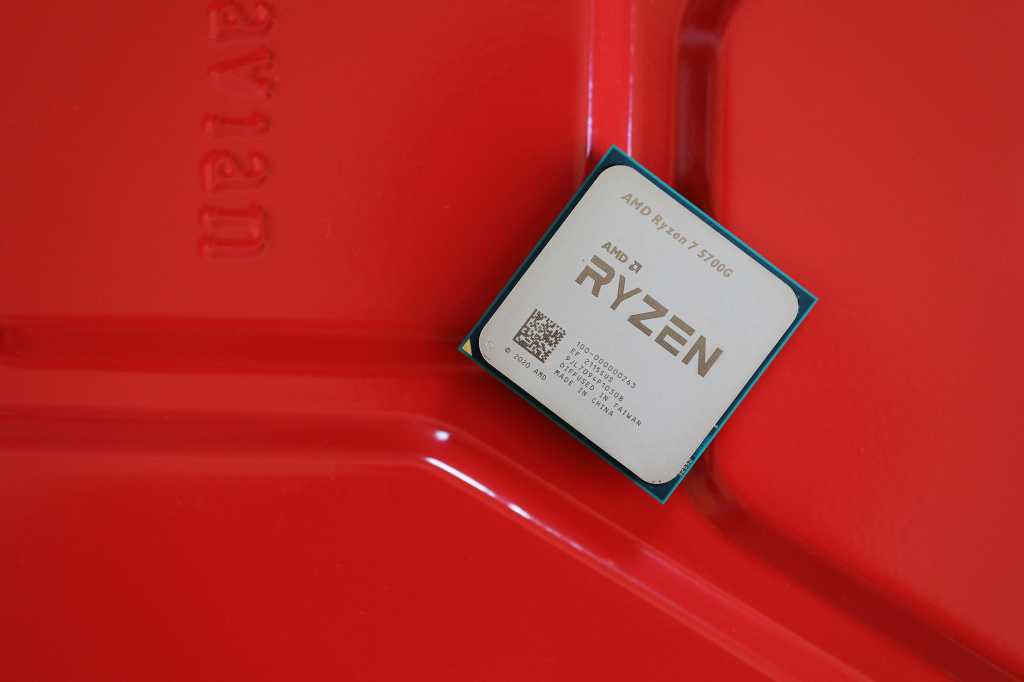 AMD’s Ryzen 5000G seems like the perfect antidote to a PC world still wracked by GPU shortages (and inflated prices for the few available). It integrates high-performing Zen 3 cores with Radeon graphics into a package called an accelerated processing unit (APU).

Whether it truly is the answer to all your needs depends largely on what you intend to do with your PC over its lifespan. We’ll walk you through the highlights and low points of this new product.

Ryzen 5000G is essentially AMD’s wildly successful 7nm Cezanne laptop chip, first used in the also wildly successful Ryzen 5000 desktop chips, but moved into an AM4 socket. You can read our review of Cezanne for full details on the chip.

AMD offered Ryzen 4000 APUs previously, but those were OEM-only for the most part. The fastest APU consumers have officially had access to was the 8-core Ryzen 5 3400G, built using an older 12nm process and AMD’s older Zen+ cores.

Two consumer Ryzen 5000G models are being introduced today, which you can officially buy beginning August 8:

You can also find Ryzen 5000G in pre-built PCs, the best of which we’ve highlighted in another story by my colleague, Alaina Yee.

The integrated graphics is one distinct aspect of these APUs over their dedicated-CPU cousins. Intel bakes graphics cores into the vast majority of its Core chips, but not AMD. Its non-G Ryzen 5000 chips need a discrete graphics card to run a PC.

Also, while “true” Ryzen 5000 desktop chips are built around multiple chips connected by Infinity Fabric, the Ryzen 5000G (much like the laptop version) is a single-chip design. Compared to Ryzen 5000, Ryzen 5000G has just half the cache (32MB to 16MB) and just 24 lanes of PCIe 3.0. Of those 24 lanes, 16 go to the GPU, and 4 from the CPU connect to NVMe. The last 4 are used to connect to the chipset, which itself can feature more PCIe lanes. You may be wistful for PCIe Gen 4, but look on the bright side: The previous consumer Ryzen 5 3400G featured a paltry 8 lanes of PCIe Gen 3.

Our testing is provided by PCWorld’s sister site, PCWelt.de, thanks to the hard work of our colleague Sebastian Schenzinger. (You can read Schenzinger’s Ryzen 5000G review in German at the site.)

We’ll kick off our analysis of Schenzinger’s results with Cinebench R23. This is the latest version of Maxon’s popular benchmark. It largely looks like the same workload as Cinebench R20, but it now defaults to a slightly harsher 10-minute stress.

The next result is from the alpha version of the popular 7-Zip utility. Once again the Ryzen 7 5700G, in 8th place on the chart,  represents well, easily outpacing most of the Ryzen 3000 chips as well as most of Intel’s 10th-gen chips.

Our next result uses the free and popular 1.3.3 HandBrake utility to convert a 12GB MP4 file using the Vimeo and Youtube Preset at 4K. HandBrake’s intensive workload generally favors more cores and threads. The Ryzen 7 5700G (in 7th place on the chart) again outpaces the Ryzen 7 3700X and most of Intel’s lineup, including the Core i9-11900K.

Our next result is from Adobe’s Creative Suite using Puget System’s PugetBench , which the PC company uses to give proper advice to customers buying custom workstations.

PugetBench for Photoshop leans on CPU and GPU during its test runs. The winners here are the original Ryzen 5000 chips, echoing Ford’s GT40 1-2-3 win at LeMans in 1966. An honorable mention but no first place also goes to Intel’s much-maligned 11th-gen Core i9-11900K Rocket Lake chip.

The other CPUs are definitely a good step behind those, but the leader of the next pack to cross the finish line? AMD’s Ryzen 7 5700G. Granted, these results are so close to be almost a tie, but an APU outpacing the once-might Ryzen 9 3900X shows just how awesome the Zen 3 cores are.

The last CPU benchmark we’ll talk about is PugetBench’s test for Adobe Premiere Pro, which also uses the popular non-linear editor as a basis. One thing you can immediately see is more cores matter a bit more in video editing and Premiere Pro. Unlike the closely packed Photoshop results, there’s a little more space here between contenders.

By now you can see that with the Ryzen 7 APU, you’re getting eight of AMD’s outstanding Zen 3 cores that yield little to Intel and its siblings. But we know you’re probably considering a Ryzen APU because you can’t afford or even find a GPU.

Up first is Metro Exodus set to 1080p and using the low preset. If you’re a gamer used to high-end gaming performance, the results won’t set your world on fire. You’re really not seeing a huge advantage over the previous retail Ryzen 5 3400G either. Still, all three Radeon-based chips offer up frame rates that are fair. That’s especially good compared to the UHD 630 graphics, which doesn’t run at all.

While Intel’s 10nm-based, 11th-gen Tiger Lake has pretty impressive integrated performance in its Xe-rated chips. Intel actually opted for CPU performance more than GPU performance, however, as it had to use an older 14nm process for the 11th-gen Rocket Lake CPUs.

Next up is Shadows of the Tomb Raider using the Very Low preset at 1080p resolution.

Next up is another incredibly popular game: Epic’s Fortnite. This game is so popular and important, it allowed Epic to strike out on its own and create its own storefront out of the shadow of Valve. Its ability to run on just about every PC on this planet helped a lot. We say that because even Intel’s UHD 630 graphics can run it at a decent clip.

AMD would like to show any parents buying their kids a system those longer bars on top, which all come from AMD’s Ryzen APU chips. Yes, parents, if you want your kid to stop complaining about bandwidth, you’ll want an AMD APU.

Should you upgrade from your Ryzen 5 3400G to a Ryzen 7 5700G? Probably not. That roughly 10-percent increase is nice, but probably not worth the investment for this one game on the IGP.

The last result is Overwatch,  another popular game that can run on fairly low-end graphics. The Ryzen 7 5700G leads the way with a decent 17-percent edge over the older Ryzen APU. Both Intel desktop graphics can run it, but they clearly don’t hold a candle to AMD.

Integrated graphics are pretty awesome because of their price, but what happens when GPUs come back to earth? We’ll abbreviate Sebastian’s testing to just two games where a Radeon RX 6900XT is plugged into the various systems to measure performance. The game we pick is Tom Clancy’s The Division 2, which isn’t as GPU-limited as many games–the CPU moves the needle more.

We know: If GPUs were plentiful and reasonably priced, you wouldn’t even be considering an APU. In the world we live, having a chip with a good graphics core is better than not having anything at all you can afford.

That’s why despite its seemingly painful price of $359, we think the Ryzen 7 5700G is all win. It can hang with and even beat Intel’s 11th- and 10th-gen chips in CPU-bound tasks. When it comes to gaming performance using the onboard graphics, it simply wrecks them.

Are you going to complain that the Ryzen 7 5700G at $359 is an insult to the memory of the Ryzen 5 3400G, which had a suggested price of $149? You will, you will. But considering the state of the world today, we understand its pricing and recognize its potential for people who can really grow into a system. You can, for example, build a Ryzen 5 5700G machine today and get outstanding CPU performance along with OK gaming performance.

Should GPUs come back to earth, sometime in 2022 or 2023, you can drop in a GPU and still get that great CPU performance with slightly slower, but still outstanding gaming performance. Even better, should you come across a windfall, you can upgrade that same AM4 motherboard to a 12-core or 16-core Ryzen.