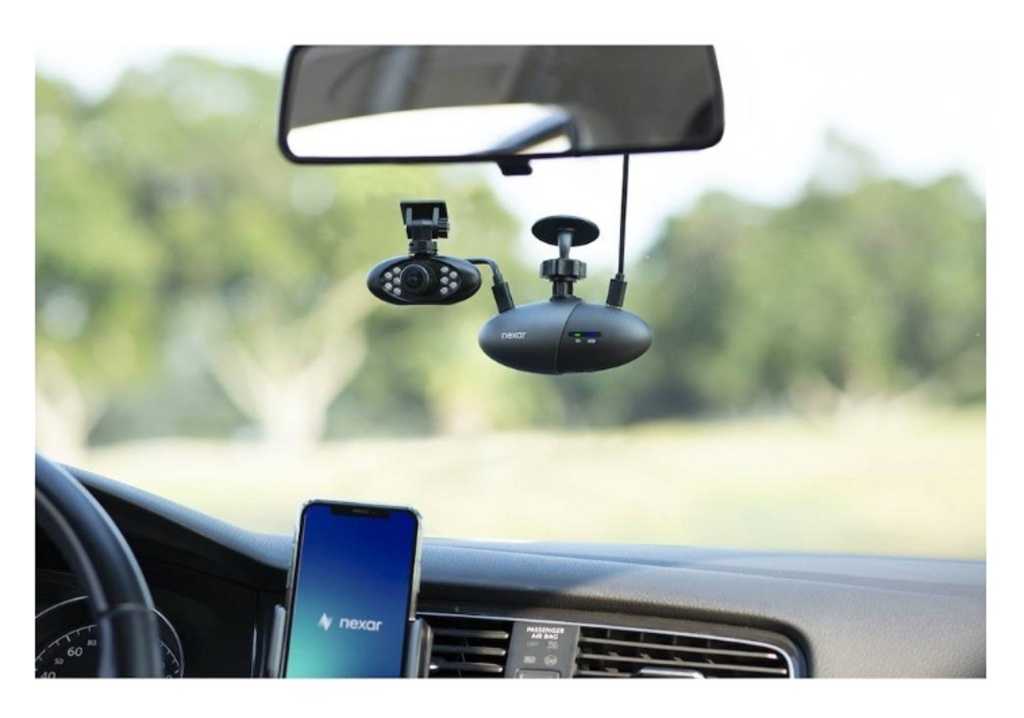 Nexar
At a Glance

This unusually styled dash cam combo (exterior/interior) takes good day and night video, both front and interior—some of the best 720p video we’ve seen. We had some initial issues connecting to the Android app, which disappeared with an update allowing us to use Nexar’s free cloud storage for captures. A solid value for professional ride-givers.

In a field dominated by square or rectangular design, the egg-shaped $160 Nexar Pro dash cam (with its equally egg-shaped discrete interior camera) stands out—in a good way. The Nexar Pro is also one of the cheaper options in a dash cam offering cloud storage, bested only in affordability by the previously reviewed Nexar Beam.

The Nexar Pro’s front camera takes 30 frames per second, 720p video captures when used on its own, but drops to 25fps when the interior camera is attached. Nexar choosing 720p is a tad surprising as 1080p resolution (which is what the Beam captures) has been the standard for front captures for a couple of years now.

Note: The dearth of hard specifications on the product webpage and Nexar’s failure to respond to queries mean the resolutions and frame rates stated are what were experienced with the camera.

The main camera’s suction mount (a sticky mount is available for $15) features an integrated GPS module that also serves as a handy lever for tightening the suction cup. Twist it 90 degrees and voila! The less expensive Beam relies on your phone for GPS information, and has to be connected at all times if you want location info. That’s one of the reasons this camera is the “Pro.”

The other reason for the pro designation is the aforementioned cabin camera, which captures the same 720p, 25 fps video. Documenting happenings inside the car is a necessity for ride givers. 720p is par for the course with interior views, which don’t need to capture license plate numbers and the like.

A whopping ten infrared lights surround the lens of the interior camera, which creates very bright interior night captures. The interior camera relies on a small, semi-permanent sticky mount rather than a suction mount. You tether it to the main camera using a short micro-USB cable. With a longer cable, you could likely use it as a rearview camera. Just a thought.

The Nexar Pro ships with a auxiliary port USB adapter plus a Type-A to mini-USB cable for powering the unit. The power cord connects to the GPS module, which in turn connects to the main camera via another short mini-USB cable. Other than the ports for the various attachments, the Pro features only the lens body, indicator lights for power and Wi-Fi, and an micro SD card slot.

Note: Nexar refers to “internal memory” on the Pro’s product page, and allows you to upgrade Apple-style at similarly boosted prices. As the presence of a slot indicates, that internal memory is actually standard, removable micro SD cards. Nexar includes a 32GB card at the $169 base price, but you can save quite a bit of money if you upgrade or replace your micro SD card from another source.

Connection issues and the app

The Nexar Pro is a phone-centric dash cam with all settings and views being accessible from that adjunct—for better or worse. During initial testing I was unable to successfully connect with two separate Android phones, including an up-to-date Pixel 4 (worse). An app update finally allowed proper connection (better).

The camera captures video out of the box without user intervention or the app. But the captures below show the camera set to GMT (our local Pacific time, plus 7 hours) before its link with the phone set the proper time zone.

Shown below is the settings page for the Pro in the Nexar – AI app. (AI?).

The app allows you to see what the camera is capturing (Live view), as well as tweak settings and interact with your cloud account where videos are stored. Nexar claims storage is unlimited and forever, a rather bold claim. Even if that changes some day, there’s always the SD card for local use—unlike the Owlcam. When paired, you can also use the app to capture video directly to the phone using the Drive function.

Along with the status lights, some rather loud audio clues are issued by the Nexar Pro at power on, power off, etc., so you can suss out the state of the camera even without the phone connected.

While I harped on the Nexar Pro’s captures being only 720p, they are actually quite good. In truth, they’re competitive with the 1080p captures of the Beam, due no doubt to better optics or a superior sensor—though neither are in the competition for best of breed. That said, both get the job done.

Exterior day captures showed good color saturation and decent detail, while direct bright light was also handled well, not blowing out the entire image. There is, however, a bit of fisheye evident from what appears to be a 140 degree field of view lens, as you can see in the capture below.

Interior day captures, shown below, feature good color, more than adequate detail, and coverage of nearly the entire interior. This looks like a roughly 140 degree field of view  as well.

As noted, most interior cameras capture at 720p, and the Nexar Pro’s interior captures are among the best I’ve seen.

Night exterior captures on the other hand, are merely average. However, while you may not be able to discern a ton of detail in the capture below, brightening the image cures that. In other words, detail is captured, it’s just not apparent at the default rendering.

Color is nicely saturated, but skewed slightly towards the red end of the spectrum. The street lights in my neighborhood have an orange tint, but not this orange. On the plus side, headlight flare is handled extremely well.

Thanks to the massive array of infrared lights surrounding the interior camera lens, night interior captures look very good. Note that details are better defined at the distance of the front seats. The back of the rearview mirror is well inside the focal range and hence appears, well, out of focus.

Despite their 720p resolution, I’d call the Nexar Pro’s front captures more than workable, and the interior captures as good as I’ve seen.

There’s a battery on board which powers the Nexar Pro for a good 5 – 10 seconds after the power is pulled. The cameras also ran fairly cool, and should hold up decently in hot and cold weather conditions. The Nexar provides a one-year warranty just in case.

The Nexar Pro’s captures detailed video, and integrated GPS means you don’t have to have your phone always connected for location info as you do with the company’s cheaper Beam dash cam. All in all, it’s a uniquely affordable front/interior combo for people that want cloud storage—especially ride givers.