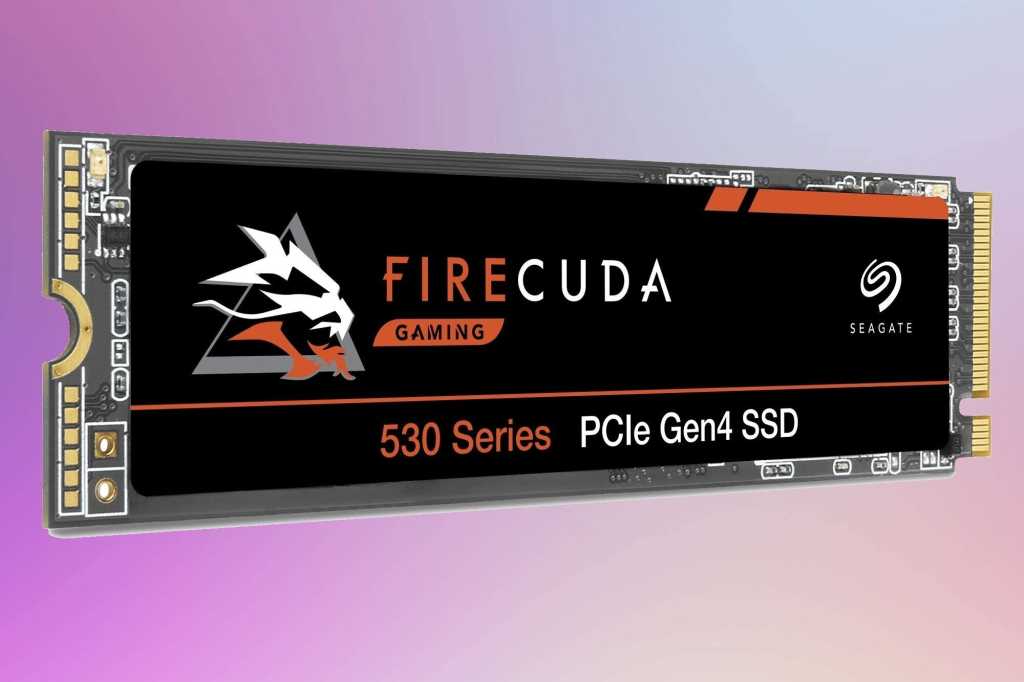 The Seagate FireCuda 530 (2TB) is the fastest NVMe SSD we’ve tested; it has a very high TBW rating for a consumer drive; and it also carries a five-year guarantee with three years of data recovery coverage. It isn’t cheap, but it’s the best thing out there.

The Seagate FireCuda 530 is currently the fastest NVMe SSD on the market. It not only bested the best of the rest in our real-world and synthetic benchmarks, it did so by a healthy margin in several tests. If you can afford it and you can find it, you won’t regret it.

The FireCuda 530 is a 2280 (22mm wide, 80mm long), PCIe 4 x4, NVMe SSD. Seagate, like many other vendors these days, are loath to reveal the fine details of their SSDs, so we’ve taken to stripping off the labels and reading the chip numbers.  The 2TB model I tested has 2GB of SK Hynix DDR4 primary cache. It uses a Phison PS6108 controller, and it stores bits on 176-layer 3D Micron TLC (Triple-Level Cell/3-bit) NAND. Good stuff.

For some reason, the models with a preinstalled heat sink carry a rather large upcharge. Standalong heatsings average $15.

The 2TB and 4TB drives are double-sided, while the 512GB/1TB capacities are single-sided. This is a possible consideration if your laptop is super-thin.

Seagate has great faith in the Firecuda 530’s longevity, possibly because the 176-layer NAND might allow greater over-provisioning, or is simply more robust. The drives are warrantied for five years and rated for 640TBW (512GB model), 1,275TBW (1TB), 2,550TBW (2TB), and 5,100TBW (4TB), respectively. TBW stands for TeraBytes Written, i.e. the number of bytes that may be written before the drive wears out.  Ratings over one TB written per GB of capacity, as they are here, are very generous.

To top off its act of certitude, Seagate will recover data from a failed FireCuda 530 for the first three years of ownership, free of charge. Let’s hope that’s something you never have to utilize. Seagate’s probably counting on that. I kid. Mostly.

There’s no suspense in this performance section, as the article title and opening paragraph openly tout the FireCuda 530’s performance. That said, we were a bit surprised by the the margin of victory. The 2TB model beat the former champ, the Samsung 980 Pro, in every test save one, and trounced it by a hefty margin in several. That’s got to make Phison and Seagate pretty happy—Samsung hasn’t been knocked off it’s best-of-breed perch very often.

Read ‘em and weep, rival vendors. The Firecuda 530 is the fastest drive we’ve tested in both synthetic benchmarks and real-world transfers.

The FireCuda 530 was the first SSD to write our 450GB test file in less than 200 seconds. And according to AS SSD 2 (not shown), it also had extremely low read access times of 0.016 milliseconds. The random access write time from that benchmark was actually high, at 0.16 ms, but that never reared its head in the real-world tests.

In short, the FireCuda 530 is the fastest NVMe x4 PCIe 4 SSD you can buy. Note that the 500GB version is a significantly slower writer than the others, especially over PCIe 4. Seagate provides estimated performance numbers in the FireCuda 530’s data sheet.

I do need to issue our new standard warning: Seagate is a dependable company, but the recent chip shortages and other factors have had some SSD vendor swapping parts–in rare cases, such as with Adata, to negative effect.

You want the fastest? This is it