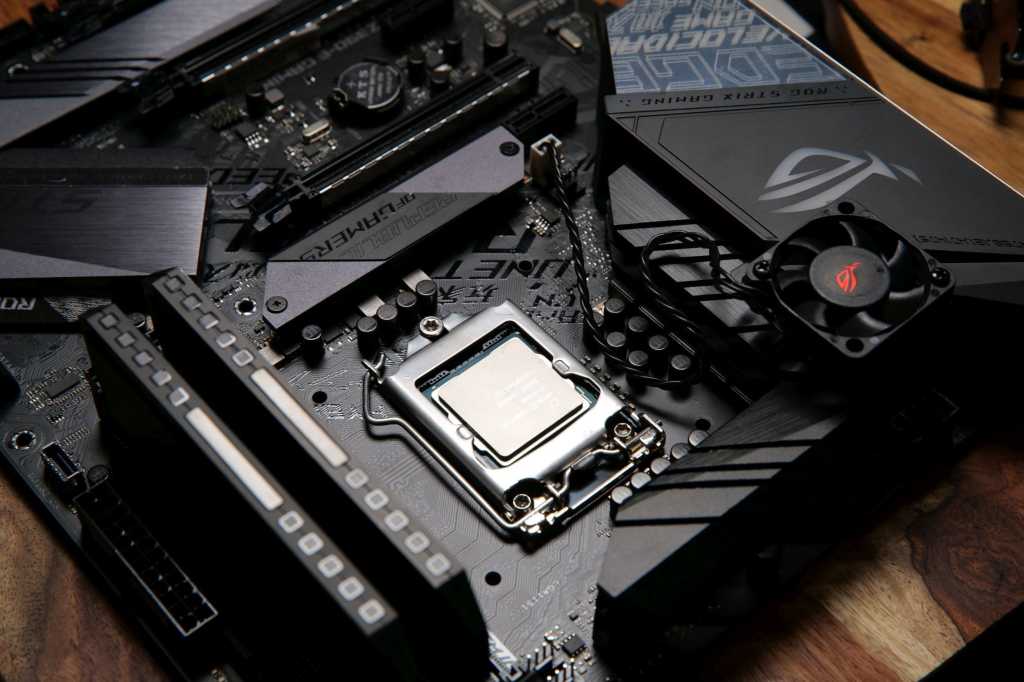 What should you look for when choosing a motherboard? The best CPUs might get all the attention, but motherboard choice can be just as crucial. We’ll show you how to buy based on the features that you need—without breaking the bank.

Choose your CPU and chipset

Your first decision also involves the CPU. Your choice here is either AMD or Intel. Motherboards only work with the specific families of processors they’re designed for. Our guide to the best CPUs can help you pick the ideal processor for any budget; your needs there should drive most of your decision making.

Without wading too deeply into the heated CPU wars, let’s breakdown some objective reasons why you’d choose either Intel or AMD over the other party.

Most PC builders should select a motherboard based on the standard ATX form factor. If you’re looking to do a smaller build, you will be limited to mini-ITX motherboards.

Prices for mini-ITX motherboards will be higher for the features that you get, and you’ll have fewer physical PCIe slots, which are used for graphics card, storage, sound cards, and other add-in cards. But in return you gain the ability to create a compact gaming PC. Some smaller motherboards, like the mini-DTX-based Asus ROG Crosshair VIII Impact with AMD’s x570 chipset, even offer terrific VRM cooling performance for their size. That said, many smaller units typically offer less cooling performance than a similarly priced ATX motherboard, since they simply can’t squeeze in extra heatsinks or fans.

Micro-ATX (or M-ATX) motherboards, while less common, sit square in the middle of the other choices. This holds true for its size as well as general feature set.

Choose the features you need

Buying a motherboard based on the features you need is vital to the selection process if you want to maximize price to performance. Here are some of the most important features to consider:

Buying based on the features you need will direct you to the correct budget level. You don’t need a tricked-out luxe motherboard like the $700+ Asus ROG Rampage VI Extreme Encore if you just want to play games and not overclock. On the other hand, you’ll want board like that if you plan on running multiple NVMe drives, overclocking your CPU, using 10GB networking, and need a ton of USB ports.

Many PC builders will find themselves in the Goldilocks zone—right in the middle, just right! You’ll want a motherboard with just enough features, performance, and aesthetics for most power users, while coming in cheaper than the top boards, which can include borderline-overkill features like fan controllers, PCIe NVMe drive adapters, et cetera. If you’re running a standard PC gaming rig, you’ll probably be able to find a decently built motherboard that fits your needs for somewhere between $150 and $300, such as the $260 MSI MPG X570 Gaming Pro Carbon WiFi.

Choosing the features you want aren’t limited to practical considerations along. Want to synchronize a carefully crafted RGB light show between your motherboard, graphics card, cooler, and case? You’ll want a motherboard that has integrated RGB headers. Many offer built-in software to help coordinate all the colored lights, like Asus’s Aura Sync software. Even if you prefer to take a “Dark” approach without glittering LEDs, a nice clean design can also add to your build aesthetic.

Now that you’ve run through the checklist of CPU/chipset choice, size, feature set, and aesthetic preferences, you can narrow down your budget. If you’re into a no-frills, cost-effective setup and never plan on overclocking, most mid-range motherboards work absolutely fine, especially with mainstream gaming processors like the AMD Ryzen 5 5600X and Intel Core i5-11600K. Avoid the absolute cheapest options, however, as they can often cause CPU performance to throttle due to limited cooling and cutting corners in other aspects of design.

If you’re happy in the standard feature set “middle zone,” you’ll do great even with a higher-end CPU like a 16-core AMD Ryzen 9 5950X or the 8-core Intel Core i9-11900K by sticking with motherboards from established enthusiast brands, like the Strix or Hero lines from Asus, MSI’s Ace offerings, and Gigabyte’s Aorus Master series.

If you absolutely must have the best, you’ll have to pay for it. Some feature-packed motherboards (again, like the $700+ Asus ROG Rampage VI Extreme Encore) may offer the features that you need, but you’ll often pay for other unassociated extras to get them.

Don’t overpay for a name though. At the end of the day, the branding of many expensive motherboards also plays a role in the pricing. Often you can go with a cheaper, midrange motherboard that offers the vast majority of the same features as their pricier cousins for considerably less price—take the Asus “Extreme” line of motherboards versus the much more affordable Strix lineup for example. The actual CPU performance difference between those mid- and high-end boards is often negligible, so you’re paying more for those extra features you may never end up using.

Keep this list in mind, shop smart, and you’ll have the perfect motherboard to go with your fancy new CPU in no time.