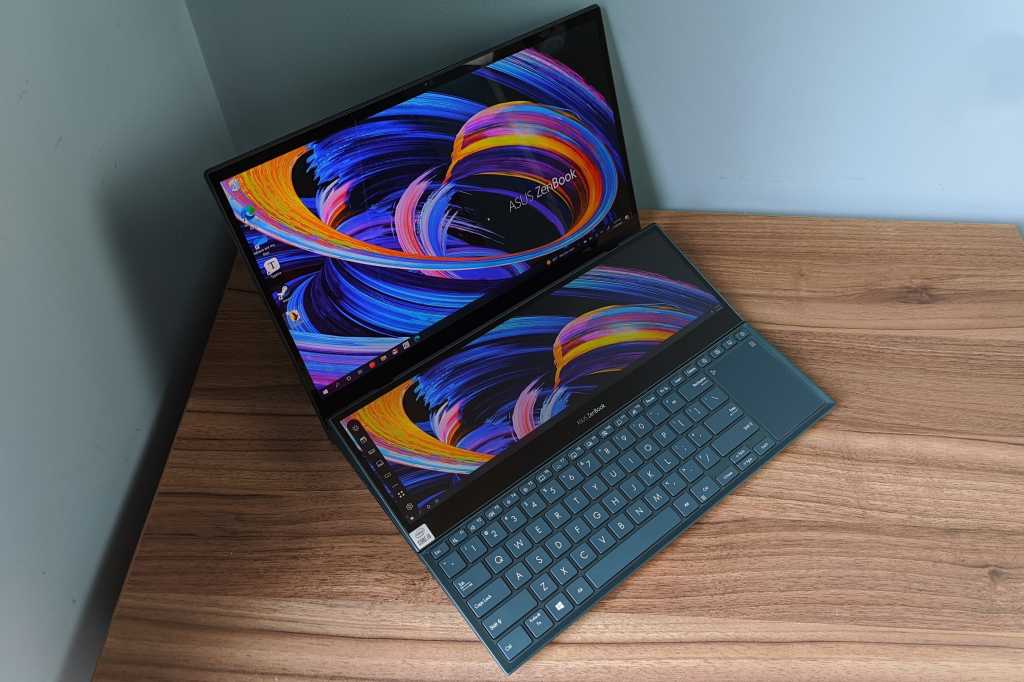 Asus’ dual-screen workhorse is an impressive technical achievement with real utility for gamers and content creators.

Regardless of whether you have $3,000 to spend on a laptop, you have to respect Asus for the one it’s come up with.

The Asus Zenbook Pro Duo 15 OLED UX582 has two touchscreens, including a 4K OLED display in the usual spot and a squatter OLED screen just above the keyboard. It’s also a beastly machine, with an Intel Core i9-10980HK CPU, an Nvidia GeForce RTX 3070 GPU, and 32GB of RAM.

You might dismiss the Zenbook Pro Duo as a gimmick, but Asus has been doing the dual-screen laptop dance since 2019. The UX582 refines both the design and second-screen software of the original model. Asus is clearly committed to the concept, and while it’s not for everyone, it does provide real utility for content creators who have a few grand to burn.

Configuration options are scarce on this laptop. Adorama sells a $2,700 versionRemove non-product link with an Intel Core i7-10870H processor, and supposedly there’s a version with 16GB of RAM, but we haven’t found that one available for purchase.

You can still find the older UX581, with a 9th-generation Core-i9 CPU and RTX 2060 GPU (here’s a refurbished model for $2,019), but then you’d miss out on the improved design, in which the second screen tilts up at an angle instead of lying flat.

While the Zenbook Pro Duo is by no means svelte, its 5.16-pound frame is lighter than you might expect given everything inside. It comes in a greenish-blue color, with an aluminum lid whose swirling pattern extends outward from the off-center Asus logo. When you lift the lid, a pair of hinges prop up the rear of the second screen so it’s easier to see and touch.

Asus is clearly proud of its work here. The design of the Pro Duo’s cardboard box mimics that of the laptop itself, opening like a clamshell and lifting the laptop out of its container. The oversized power brick comes in a fancy box of its own.

The Pro Duo also ships with a bunch of accessories, including a palm rest that slides up to the laptop’s bottom edge, an ergonomic stand that you can stick on to the laptop’s backside, and a slim backpack. I had no problems packing everything into the bag, along with an external mouse, mechanical keyboard, and PlayStation 4 controller.

As for the displays themselves, the main screen is a 440-nit panel that covers 100 percent of the DCI-P3 gamut, according to Asus. It’s one of the more vibrant screens you’ll find on a laptop right now, and you can comfortably use it indoors at nowhere near maximum brightness. The secondary LCD screen has a matte finish, which makes sense when you realize it needs to avoid reflecting overhead lights into your eyes.

Putting the screens to use

From the perspective of Windows 10, the Asus Pro Duo’s lower screen—or ScreenPad Plus, as Asus calls it—is just a second monitor like any other. You can give it a taskbar, adjust the display scaling, and drag windows back and forth at will.

That alone would make the Pro Duo more interesting than your average laptop. But the Pro Duo is the rare instance in which loaded vendor software is a welcome addition. By using Asus’ ScreenPad Plus software, you can open up a bunch of new use cases that you won’t get with a second monitor alone. Some examples:

All of this does involve a learning curve. Asus’ various icons and menus aren’t always intuitive, and I had to search online to figure out how to load Asus’ Adobe-optimized control panels. I also found the second screen a bit hard to read without increasing its level of display scaling.

But after a few days, I got the hang of using Asus’ drag-and-drop shortcuts to move windows around, and I set up a few app presets for productivity. (My favorite example: web browser on the main screen, Typora across the lower two-thirds, and Plexamp in the bottom-right third.)

I only wish Asus had taken the obvious step of letting you use the second screen as a Wacom-style drawing surface for the main screen. While you can use the stylus directly on either display, the larger screen sits at an awkward angle for drawing, and the smaller one is too cramped. Being able to mirror your pen strokes from the smaller screen to the larger one would would make the Asus Pro Duo much more appealing to artists.

The Asus Pro Duo’s unusual design does create some compromises on the keyboard and trackpad front, but it also creates some new opportunities.

I had no qualms with the quality of the actual keyboard, which offers quiet typing with satisfying tactile feedback, but it puts your hands in an uncomfortable position unless you use the included wrist wrest.

The trackpad, meanwhile, is plenty smooth, but taller than it is wide, making it a mismatch for the widescreen display. And because it sits next to the keyboard, lefties will hate it. On the upside, the trackpad can transform into a number pad by long-pressing a button in its top-right corner, further underscoring the idea that Asus really expects you to plug in an external mouse.

Despite the price, Asus really skimped on camera and security features. The webcam is the same somewhat-fuzzy 720p camera you’ll find on much cheaper laptops. While you can disable it with a keyboard shortcut, it lacks that physical shutter that some other high-end notebooks offer. The Zenbook Pro Duo does support face recognition for signing in, but it lacks a fingerprint reader, which I find much more reliable in general.

On the upside, the Harman Kardon-branded speakers are impressively loud. While they don’t offer much bass for music, high-end clarity is great for videoconferences and shredding through foes in your favorite first-person shooter. Microphone quality is excellent as well, producing rich vocals for your next audio call or Twitch stream.

Part of the Asus Zenbook Pro Duo’s allure comes from its desktop-like tech specs, essentially giving you a portable PC workstation. Still, our benchmarks show that it doesn’t quite keep up with other high-end gaming PCs, perhaps owing to the peculiarities of the dual-screen design.

Looking at HandBrake, for instance, the ZenBook Pro Duo encoded our test video file in 24 minutes and 53 seconds, just barely beating out the Core i7-10870H in Gigabyte’s Aorus 17G and placing well behind Asus’ ROG Zephyrus Duo, which has the same Intel Core i9-10980HK. While all of these laptops get the job done quickly, the Pro Duo does slightly underperform.

The same is true in Cinebench, which tests short bursts of performance rather than the sustained loads of HandBrake. While single-thread scores were fine, the Pro Duo was again behind the ROG Zephyrus Duo in multi-threaded performance despite having the same processor.

Gaming is a mixed bag as well. On paper, Nvidia’s RTX 3070 and RTX 2080 are similar, but we saw laptops with the latter edge out the former in the ZenBook Pro Duo. That was the case, for instance, in Rise of the Tomb Raider’s benchmark tool, where the ROG Zephyrus Duo again took the upper hand.

3DMark’s Fire Strike 1.1 benchmark showed similar results, though you can at least see a clear advantage for the RTX 3070 over the RTX 1650, which continues to ship in many lower-priced workhorse laptops today.

In practice, you’ll want to stick to 1080p in most cases, and you’ll have no problems cranking up graphics quality in turn. 4K gaming is doable on this laptop, but only with hits to graphics quality and framerate. In Death Stranding and No Man’s Sky, for instance, 4K resolution was possible only at around 30 frames per second.

Battery life, meanwhile, was as pleasant surprise given everything the Pro Duo has going on. 4K OLED screens tend to be battery hogs. This laptop has two of them, and its tech specs don’t lend themselves to longevity. Even so, the Pro Duo held its own against other workhorse laptops, lasting for 6 hours and 25 minutes in our looping video rundown test. We kept the second screen on at its default 50-percent brightness for this test, but we played video only on the primary screen at our standard test brightness of 250-260 nits.

Benchmarks aside, the Asus ZenBook Pro Duo is hard to compare with other PCs. Its closest competition may be a multi-monitor desktop, or a laptop with an attached travel monitor. The Pro Duo is more portable and versatile than either of those options, especially with the software tools Asus has thrown on top.

For a certain niche of artists, media creators, and gamers, all that might add up to something special, even if it’s unattainable for the rest of us.