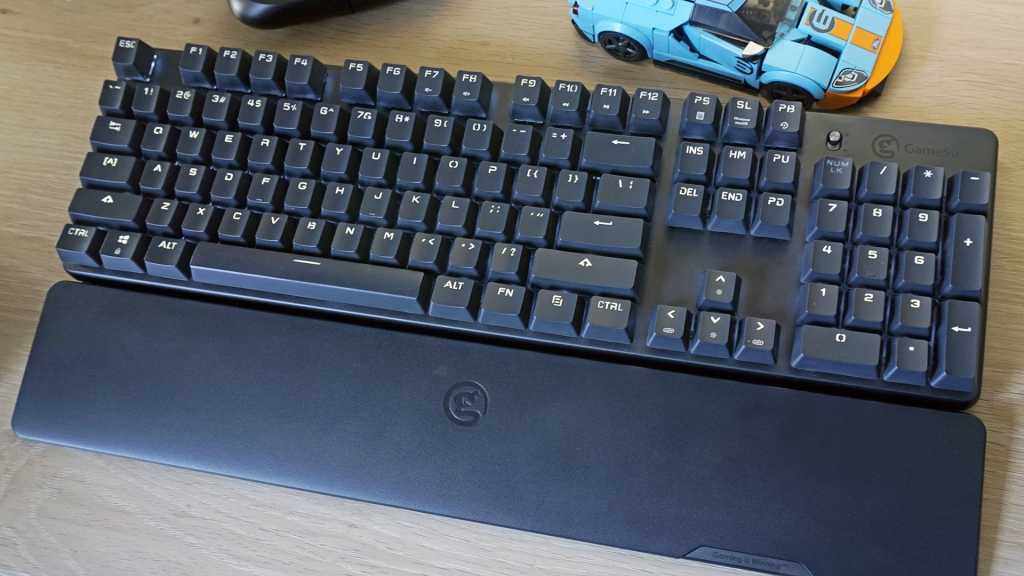 Michael Crider / IDG
At a Glance

The GameSir GK300 isn’t great for gaming, but it’s a surprisingly capable option for general use if you want tons of features in a big wireless mech, at less than half the price of other keyboards.

Say you want a keyboard that ticks every box: You want a full-sized beast, eye-catching backlit keys, an included wrist rest, multiple wireless options, and trendy mechanical keys. From big-name suppliers like Logitech, you’re looking at spending $150 to $200. Budget manufacturer GameSir will give you all of that for an impressively frugal 80 bucks.

Is the GK300 as good as keyboards twice its price? No. Franky, it’s not even particularly impressive for gaming, thanks to its use of clicky imitation Cherry Blue switches. But it’s a fantastic value if you want a full-sized wireless mech board with extra bells and whistles.

With a standard 108-key layout, the GK300 should be familiar to anyone who demands a 10-key number entry. And as a bonus, its standard stems and keycaps mean that it’s compatible with almost all Cherry-style mechanical keycap sets. The switches themselves are decidedly not Cherry: They’re low-price, imitation Blues from TTC. And there’s enough rattle and wobble in the key action to make custom keyboard snobs turn up their noses. But if you’re looking for something with a long travel action and enough clickity-clack to piss off everyone in your office mates, they work.

The GK300 comes with a surprising array of extras that you wouldn’t expect from a wireless mechanical board at this price. In addition to the included detachable wrist rest (very comfy, if unfortunately limited to one angle), there’s white backlighting with a variety of effects and animations, a tough aluminum plate on the top of the body, and two types of wireless connectivity options.

You can choose between 2.4GHz RF to the dongle or Bluetooth via the power switch above the num pad. (Note that the included USB cable is for charging only—the battery lasts about a week with full-brightness lights, or months and months without them.) This effectively means that the keyboard can switch between two machines, PCs or mobile devices, on the fly. You’ll have to do without custom key programming, but on a board this big, I doubt anyone will miss it.

The keyboard’s recharging port is an awkward and outdated MicroUSB on the left side. This is going to be particularly annoying if you use your mouse with your left hand. What’s even more annoying is that the 2.4GHz RF connection is a bit weak: With my Razer mouse (and its admittedly intense wireless connection) on the right, I noticed the keyboard lagging and missing keys. Rearranging the location of the dongle fixed it, but it’s something to be aware of: you might want to switch to Bluetooth if your office is bathed in 2.4GHz gadgets.

While this budget board won’t blow you away if you’re used to high-end mechanicals, and its loud, clicky switches and so-so wireless connection aren’t suited for gaming, that doesn’t mean the GK300 doesn’t have merits. Give it a shot if you’re looking to save a bundle on a big, full-featured keyboard for standard duties.