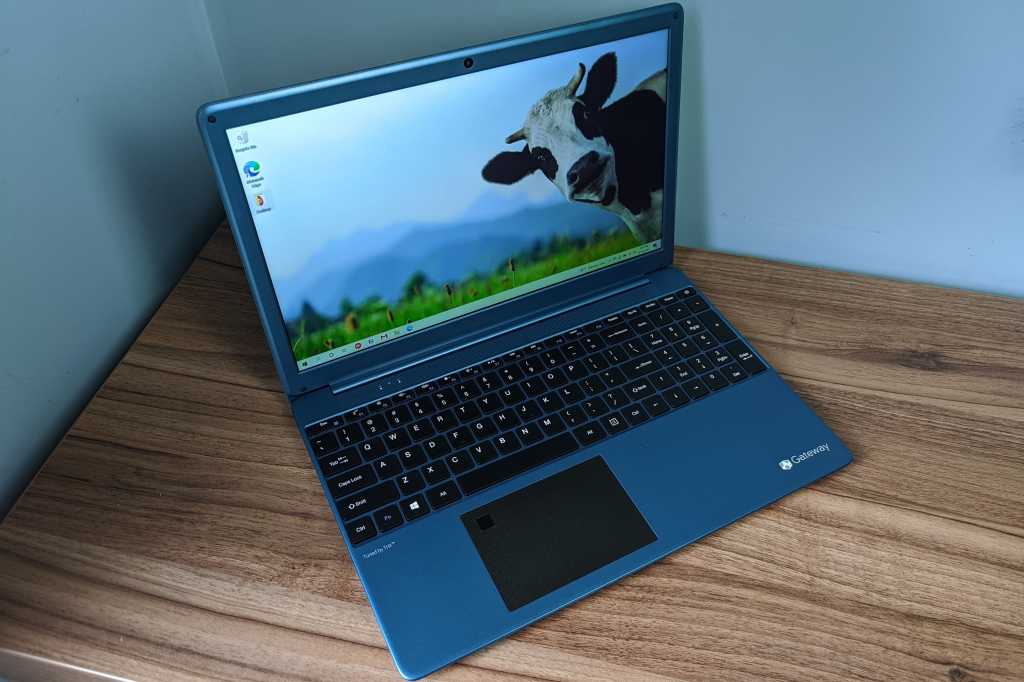 Working under the Gateway brand, Acer makes lots of sacrifices to hit its $399 price point.

The Gateway 15.6-inch Ultra Slim Notebook is a classic budget PC. At $399 from Walmart, the price is hard to beat, especially considering its solid performance, decent storage space, and roomy screen size.

The trade-offs come from all the things that don’t show up on a spec sheet. The display is harshly lit, with subpar viewing angles. The trackpad is abrasive. The plastic enclosure is creaky and wobbly, and battery life is woefully brief.

None of these compromises are new to the budget price range. Basic productivity is the realistic expectation here, and this laptop does have some strong points. If you’re undeterred by the downsides, and you really can’t spend more, Gateway’s 15.6-inch Ultra Slim Notebook might fit your bill.

Walmart, Acer’s exclusive partner in resurrecting the Gateway brand, offers several other configurations. A version with AMD’s Ryzen 5 3450U CPU sells for the same $399Remove non-product link, while a version with an Intel Core i5-1135G7 CPU, 512GB of storage, and 16GB of RAM sells for $579Remove non-product link. There’s no 512GB storage option with the Core i3 processor, but the MicroSD card slot—an increasingly rare feature on any laptop—provides an easy way to add more storage.

For those who like to tinker, this laptop is delightfully upgradeable. A small hatch on the underside lets you throw in more memory. All you need is a Phillips-head screwdriver to pull off the entire rear panel, where you can access the battery and the M.2 SSD.

Sadly, the laptop’s sole USB-C port doesn’t support charging. That means you always have to use the included barrel charger, which charges slowly and comes with a space-hogging power adapter.

If not for the appealing, ocean-blue finish on this particular review unit, Gateway’s 15.6-inch Ultra Slim Notebook would look much like any other low-cost, all-plastic laptop. It has thick bezels surrounding its matte display. The chassis will creak and crunch under your hands from the moment you pick it up.

Display quality is usually the first thing to go in budget laptops. The 15.6-inch screen on this model is roomy, but a little dim. It also emits an unnaturally blueish hue that puts a strain on the eyes. Although the display’s IPS technology is supposed to enable a steady image from wide angles, you’ll notice the screen darken and brighten as you tilt it. The screen’s matte finish does have one advantage, though: It’s easy to read outside, even on a sunny day.

Keyboard and trackpad quality are another area where the Gateway Ultra Slim laptop compromises to hit a lower price. While the keys themselves offer decent travel, they feel mushy and wiggly. The plastic enclosure contributes to a hollow feeling under your fingers.

The trackpad is worse: Its rough plastic finish makes your fingers stick and hinders fine-grained cursor movements. Build quality is an issue here as well, as pressing down firmly on the trackpad produced two audible clicks in a row. (Thankfully, only the first one registered as an actual mouse click.)

The Gateway 15.6-inch Ultra Slim Notebook’s webcam offers the same 720p resolution as the vast majority of Windows laptops, most of which continue to treat camera quality as an afterthought. We wouldn’t expect a camera on a $399 laptop to support Windows Hello face recognition, and this one doesn’t. However, a privacy shutter or kill switch for the camera would have been nice.

The fingerprint reader is a nice security touch on a sub-$500 laptop, despite its odd position in the top-right corner of the trackpad.

Like a lot of other PC makers, Gateway follows the trend of partnering with a big audio brand to fine-tune its laptop speakers. In this case, the partner is THX, and as expected, this kind of aural window dressing can only do so much within a laptop’s confined space. The upward-firing speakers are indeed well-balanced—you can listen to music or YouTube videos without feeling like you’re trapped in a tin can. But they’re on the quiet side, so you may strain to hear your video or conference call in noisy environments.

Microphone quality is sketchy. When I captured an audio sample, it made my voice sound somewhat nasally compared to what I’ve captured from other laptops. I could also hear its overly aggressive attempts at noise cancellation.

We seldom get a low-end Intel Core i3 processor to test here at PCWorld. Most vendors want to show off the fastest versions their computers, which means we typically end up with Core i7 or Core i5 configurations instead.

Using the Core i3-1115G4 processor in Gateway’s laptop was clarifying. For basic document editing and web browsing, the Core i3 chip was perfectly zippy, proving that you probably don’t need anything faster unless you’re getting into media creation or gaming.

Unfortunately, that reality doesn’t show up in benchmark tests, so keep that in mind as you peruse the charts below.

Starting with PCMark 10, which simulates a gamut of productivity tasks, the 15.6-inch Ultra Slim Notebook’s 11th-generation Core i3 CPU did manage to outpace the 10th-gen Core i5 in Microsoft’s Surface Go laptop. Not surprisingly, it fell well behind higher-end 11th-gen chips.

HandBrake is where that lack of multi-core power really shows. This test involves encoding a large video file, as you might do if you were editing or converting personal videos. The task really benefits from lots of computing cores. Gateway’s laptop completed the job at a glacial pace of 1 hour and 32 minutes.

The other big downside to Core i3 processors is the lack of Iris Xe graphics for gaming. No one should expect a $399 laptop to be a gaming machine. In case you were wondering, though, here are our findings, via the 3DMark Wild Life benchmark (below) and some anecdotal gameplay: You might be able to eke out some lightweight indie games, but don’t expect much more than that. Even the fairly lightweight first-person shooter AMID EVIL was unplayable for me due to constant stuttering.

Now for the potential deal-breaker: battery life. In our offline video rundown test, the laptop lasted just shy of 6 hours (5 hours and 58 minutes). That’s more akin to what we see in power-hungry workhorse PCs than typical thin-and-light laptops. It squanders any hope of being able to get in a full workday off the charger.

Should you buy the Gateway Ultra Slim Notebook?

If $399 is all you can spend, the Gateway 15.6-inch Ultra Slim Notebook is a reasonable purchase. It offers basic productivity performance and a big display (though of middling quality).

If you’re able to expand your budget, you might find a reasonably priced Windows PC without the Gateway’s glaring downsides, especially by dipping back to previous model years. Lenovo’s excellent C740 Yoga, for instance, still sells on Amazon for $640Remove non-product link (with a smaller-size SSD than what we tested). For those who’ll consider a Chromebook, the Acer Chromebook Spin 713 regularly sells for less than its $629 asking price at Best BuyRemove non-product link. HP’s Envy x360 15 is a classy convertible that sells for as little as $720 on HP.comRemove non-product link. And while we wouldn’t shout it from the rooftops, there’s a solid case for using an entry-level iPad as a laptop alternative.

The Gateway 15.6-inch Ultra Slim Notebook’s biggest saving grace may be its potential to work as a cheap desktop replacement. Real-world performance is pretty snappy, you can upgrade the memory if needed, and the HDMI port facilitates easy connections to external monitors. Using this laptop with an external display, keyboard, and mouse would sidestep many of its biggest shortcomings. You’d be hard-pressed to find a comparable desktop for $400.

Only when you take it on the road will you remember why it was so cheap in the first place.