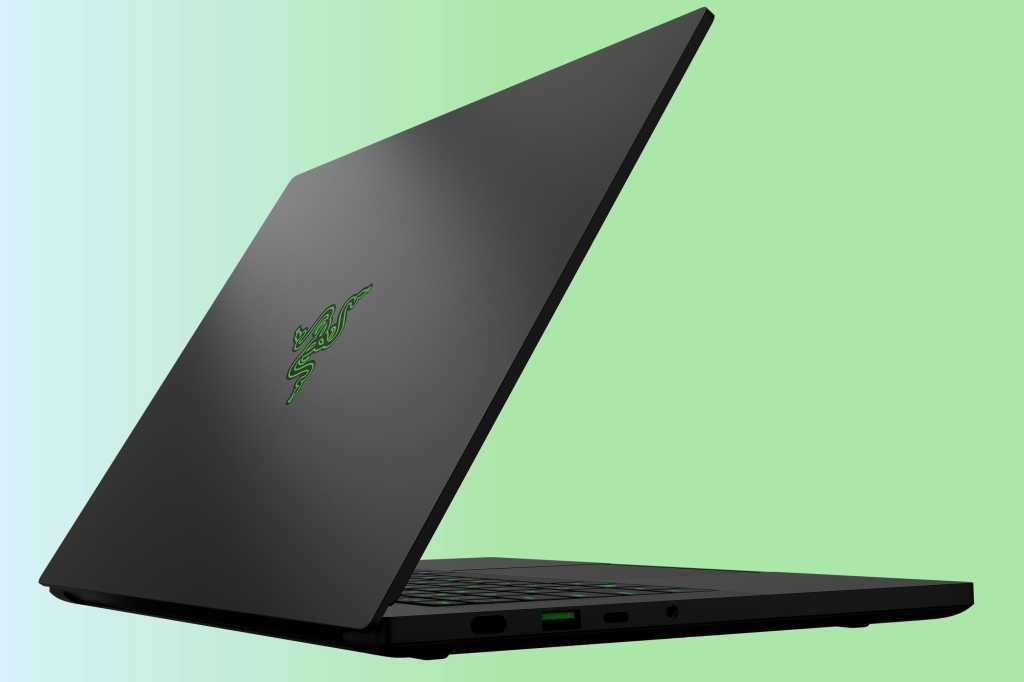 The Razer Blade 14 is a thin, light, surprisingly capable 14-inch gaming laptop. But you’ll need to reach deep for this top-tier system, because even the lowest-end model isn’t that cheap.

When we received the Razer Blade 14 for review, we were curious to see what Ryzen 5000 and Nvidia RTX 30 series hardware could do in such a thin and light laptop. To Razer’s credit, the Blade 14 is surprisingly capable—with a few compromises. But you’ll need to reach deep for this top-tier system, which costs $2,800 at Amazon.

Razer put some impressive hardware into the Blade 14, especially considering its size. Here are the main components:

The Razer Blade 14’s design is very precise. Gone are the rounded edges of previous iterations, replaced by tighter angles and a neater profile, clad in an industrial-looking, matte-black finish. The Razer Blade 14 is the thinnest 14-inch gaming laptop currently on the market—at just 0.66 inches, slimmer than the Asus ROG Zephyrus G14 (2021) (0.7 inches), and the Predator Triton 300 SE (2020) (also 0.7 inches).

But while it’s super-slim, the Razer Blade 14’s anodized-aluminum body feels solid just about everywhere. Pick up the Razer Blade 14 with one hand and you won’t see any flex or movement in any part of it, which is the kind of sturdiness I need in a system of this size, which will undoubtedly make its way to the bottom of my sports bag.

The top and base close down to an almost impenetrable shell. Once shut, the lid stays tightly in place, thanks to magnets that hold it fast. When you do want to open it, a groove in the front gives you leverage.

The branding  is strong without being showy. Closing the top cover , the iconic glowing-green Razer logo looks great—and it confirms that I had successfully powered down. An understated black Razer logo is emblazoned into the bezel below the display, like an engraving on a trophy.

At 3.92 pounds (1.78kg), the Razer Blade 14 is light for a gaming laptop. However, its hefty power requirement means it does need a serious AC adapter–this one weighs 1.7 pounds. While it’s fairly compact at 6.7 x 2.7 x 0.9 inches, the brick along with its cords  do add an uncomfortable extra lump to your pack. The power cord’s plug exits to the laptop’s rear, which many gamers find more convenient.

The Razer Blade 14’s keyboard and trackpad work well. The trackpad is centered in the wrist area , providing plenty of space for your hands to sit on either side. I found it responded quickly and accurately, and it registered solid clicks.

The keys are compact (about fingerprint-width), as you’d expect in a 14-inch laptop, but they’re comfortable to type on and have decent travel .

As with any smaller keyboard, there are some compromises. The up and down cursor  keys are half-sized, and the Function keys shrank a bit as well, making them slightly harder to target. But these are trifles in an otherwise good layout.

The keys are comfortably backlit without any discernible light bleed. Razer’s pre-installed Synapse software lets you tinker with each key’s illumination, which is very useful for hot-keying game commands. You can also switch off the backlighting altogether, which is very handy for conserving battery power. I got one hour’s worth of additional playtime from my unit, which made all the difference on a Sunday afternoon when I had left that weighty  AC adapter at the office.

The Razer Blade 14’s display panel looks remarkably bigger than 14 inches diagonal, thanks in part to its super-thin left and right bezels. While its 16:9 aspect ratio is going out of style on productivity laptops, gaming on the display was a real treat. The 165Hz QHD panel delivered buttery-smooth visuals on games like Shadow of the Tomb Raider and Metro Exodus. While Razer does not provide an official brightness spec, our lux meter registered 380 lux, or approximately 320 nits—sufficient for playing indoors, but probably not outside except in shade.

Razer promises good color quality from the display, saying it has 100-percent DCI P3 coverage throughout. I found the colors and contrast looked just right: In Shadow of the Tomb Raider, the forest scenes displayed a rich range of tones, from the brights of the light filtering down from the upper tree canopy to the darks of tree shadows.

The Razer Blade 14’s audio setup features THX Spatial Audio and 7.1 surround sound. As with most laptops, the speaker sound is just passable. Above 70 percent volume, once or twice the Razer’s speakers buzzed slightly. Also as usual, donning headphones improves the quality immensely.

These days I have so many devices on the go that I like the convenience of plugging them all into my laptop. Slender laptops sometimes have to skimp on ports, but the Razer Blade 14 covers the bases well, with dual USB-C and USB-A as well as HDMI. The one thing that’s missing is Thunderbolt 4 support, meaning you can’t hook up dual 4K (or one 8K) displays, or enjoy the speediest data transfer. To be fair, however, Thunderbolt support is almost non-existent in AMD-based machines.

We’re impressed that Razer jammed AMD’s high-end Ryzen 9 5900HX mobile CPU and Nvidia’s GeForce RTX 3080 into this little Blade 14 laptop. While some of the more intensive benchmarks clearly pushed the Blade 14 past its comfort zone, its test results are good overall, though rarely the best—totally understandable given its space constraints. To its credit, the Razer Blade 14 ran exceptionally quiet during benchmarking and gaming, as we’ve also observed with other Ryzen 5000 laptops. Our comparison systems include a generational selection of AMD Ryzen and Intel Core-based models.

Maxon’s Cinebench R15 gauges CPU performance. While single-threaded performance (representative of mainstream applications) is about the same for all models, the Razer Blade 14 posted one of the better multi-threaded scores. This bodes well for gamers wanting to play more intensive titles (and perhaps edit video as well).

Similarly, the Razer Blade 14 was a solid performer in a benchmark that uses the free HandBrake 0.9.9 utility to encode a 30GB, 1080p MKV file to MP4 using the Android Tablet preset. This prolonged test tends to show which laptops have to throttle performance before they get too hot.

The Asus ROG Strix G15 Advantage Edition and Alienware Area 51m R1 systems that top this chart are both huge, heavy systems with lots of thermal headroom. The Blade 14 follows closely behind, ahead of the thin-and-light Asus ROG Flow X13 and a slew of past-generation comparisons. The Razer Blade 14 should be able to tackle tasks like streaming, vlogs and video content, and the encoding, compression and decompression of large files that are increasingly common tasks for gamers and content creators.

Anecdotally, playing on the Razer Blade 14 felt like driving a new sports car with a very smooth clutch. As the workload seemed to get heavier, the system appeared to shift up its processing power effortlessly. The Razer Blade 14 appeared to handle the most robust AAA games and make it look like a cinch.

What’s important to know about the Blade 14’s RTX 3080 GPU—and any mobile RTX 30-series chip—is that Nvidia lets vendors vary the wattage. As a result, the same chip will perform very differently depending on how it’s set. The Razer Blade 14’s RTX 3080 is set at 100 watts, but the same part in the Asus Strix Scar G17 is set at 130 watts, and 105 watts in the Gigabyte Aorus 17G. You’ll see those differences play out in the performance charts below.  The Razer for its weight and size profile did surprisingly well, but it lacked the kind of oomph that other larger laptops could muster.

In the Shadow of the Tomb Raider benchmark below, the Razer Blade 14 brings up the rear, outpaced by RTX 3080 GPUs with higher wattage settings as well as an RTX 3070 with a lower wattage. A system with AMD’s Radeon 6800M also jumped ahead of the Blade 14. To be fair, however, the other systems are heavier and thicker, with more internal space to manage their thermal output.

Seeing these results, it begs the question of whether Nvidia’s RTX 3070 would be a better fit for a laptop of the Razer’s size and profile, perhaps hitting a sweeter spot in bang for buck considering the $600 difference. Unfortunately, we didn’t get to try out the 3070 variant of the Razer Blade 14 to test this hypothesis.

Your mileage will always vary in battery performance, especially if you try to game when you’re off AC. Our results below most accurately reflect what you’d experience in a light, mainstream task.

We charge the battery to full, then measure the time it takes to run down while playing a 4K video on repeat, with the sound turned to 50 percent and a pair of headphones inserted. As you can see from our chart, the Razer Blade 14 (2021) lasted for 7 hours and 23 minutes, the longest compared to the selected competition. If you try to run a game, expect the battery to last a few hours at most.

Razer has earned some props: The Blade 14’s high-end parts perform capably despite their space constraints, and games look amazing on its QHD panel. Clearly at this price the Blade 14 is not for everyone, but it’s further proof that ‘thin, light gaming laptop’ is no longer an oxymoron.