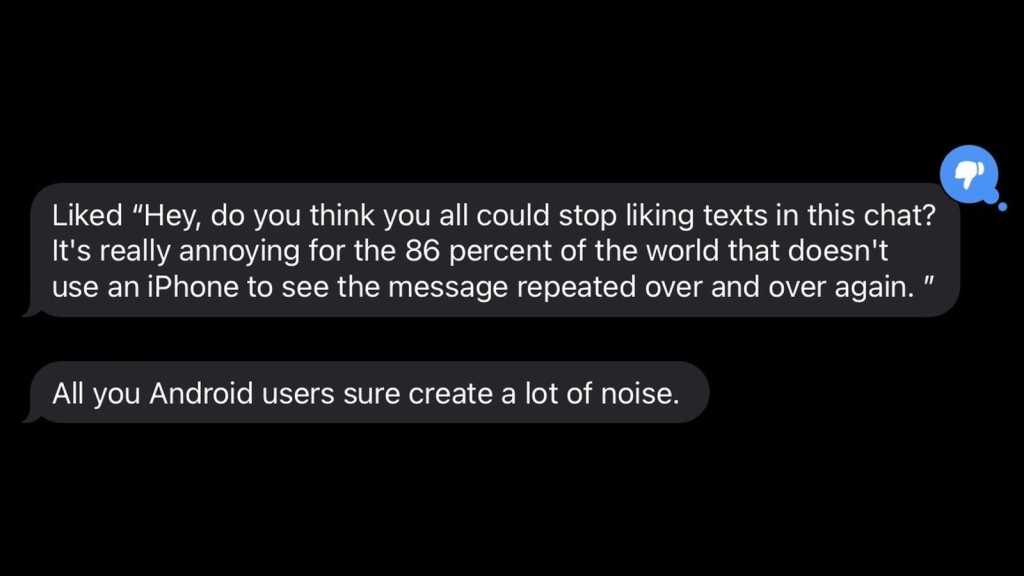 Hey iPhone users, I know your world view is pretty much centered on blue bubbles, but do you think you could stop Liking everything in group texts? It’s annoying AF to Android users, a.k.a. most of us.

I know you’ve been conditioned by Facebook and other social media services to show your approval of a friend’s cat having a bunch of kittens—but when you’re in a mixed group text, it doesn’t work the same way.

In a group text with 20 people in it, it takes the sentence you Liked—such as: “I’m feeling very sad because yesterday they stopped selling the McRib, and I’m really, really torn up about it. I’m not sure what to do with my life now”—and simply repeats it with the word Liked next to it.

Oddly, as one of the 86 Android users for every 14 iPhone users in the world, I had assumed that on the iPhone, the mixed group chat Like works like it does on Facebook, but to my horror I discovered the situation is actually worse.

Yes, you only see an emoticon over the original message, but everyone else in the group chat receives the same spammed “Liked” message cluttering up the conversation.

That makes this public service announcement even more critical because clearly iPhone users must be annoyed by it as well, but for some reason are too afraid to tell their fellow iPhone users to quit doing it too. Or maybe they get some smug self-satisfaction from seeing the iMessages Like feature being used?

I don’t know but please, iPhone users, for Peter Griffin’s sake, stop Liking things in group chats. No one enjoys it, it makes everyone mute the conversation, and the actual critical information being shared could be lost because of all your frigging’ Likes.

And yes, please feel free to Like this too.