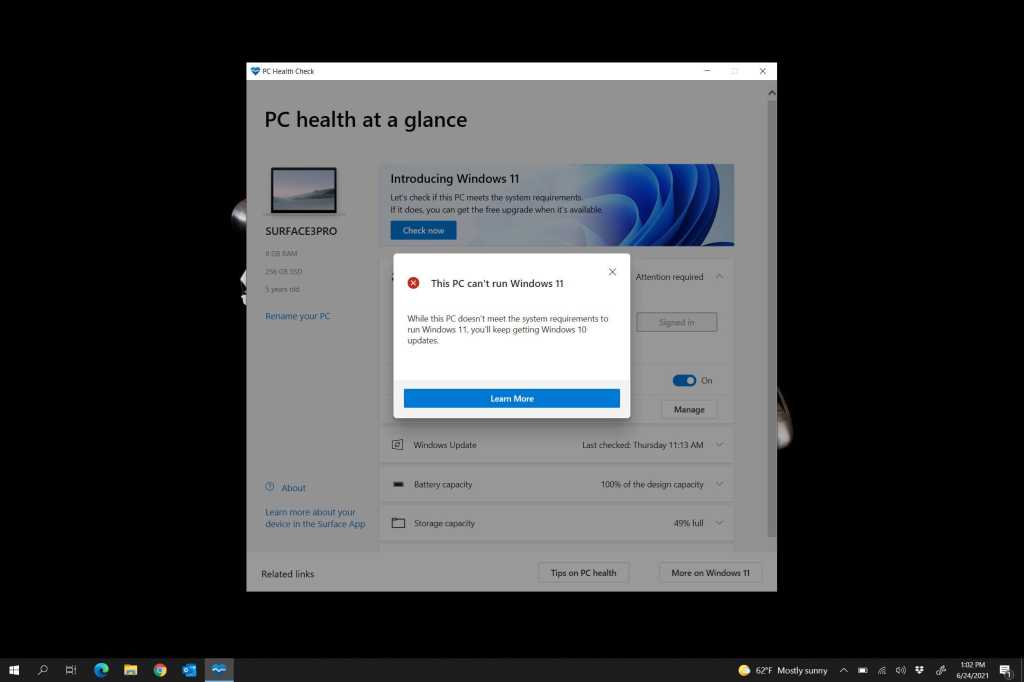 If there was a way to snatch victory from the jaws of defeat, just to reverse slam dunk victory back into the jaws of utter failure, Microsoft found it with the way it’s handled the Windows 11 hardware compatibility fiasco.

Last Friday, the company passed word to several news outlets that it would indeed let PCs built before 2018 install its upcoming Windows 11 operating system, ending what had been building into a modern day Cuban Missile Crisis among PC enthusiasts.

The crisis began in June when Microsoft released a Windows 11 compatibility checker that essentially threw computers running still-powerful CPUs like the Intel Core i7-7700K and AMD Ryzen 7 1800X overboard—including its own Microsoft Surface laptops—in the name of security.

As you can imagine, the PC community wasn’t too happy to have to be forced into a smart phone-like upgrade program to get a more secure Windows 11. It’s never been that way for the PC, after all, which has long held legacy support as one of its key pillars.

It’s why most experts expected Microsoft to back down (I didn’t)—and it seemingly did last Friday.

But it turns out Microsoft didn’t truly back down, and in an amazing fumble worthy of being captured on high-speed camera and replayed for generations, it may have made the whole mess even worse. That’s because after telling everyone that older PC hardware wasn’t doomed if you manually install Windows 11, the company said those same “unsupported” PCs won’t be getting updates.

As our news story covering it said: “But Microsoft said Friday evening that unsupported PCs running Windows 11 won’t be entitled to receive updates via Windows Update. That means, Microsoft added, that unsupported Windows PCs might not include security and driver updates, either.”

What’s galling about this is it simply makes no sense. I suspect many of the skeptics who thought Microsoft was going to fold its hand originally figure that Microsoft is just going to fold again here.

I’m not so sure of that myself. While I was truly saddened to hear that Windows 11 would break one of the unwritten rules of legacy support for PCs in June, I could understand why and in many ways, it could have been justified. Ripping the Band-Aid off for older less security hardware would be painful, but I get it.

Microsoft’s latest decision though, is like ripping the Band-Aid off your hairy arm, putting it back on, and then halfway ripping it off again because you can’t decide what to do.

I’m not even sure what’s worse at this point. If Microsoft completely capitulates and offers updates to all, it will feel as though all this suffering was for done for nothing. And if it does decide to let people run Windows 11 in an unpatched mode it could actually expose those customers to more security risks than if they had just stuck with a updated versions of Windows 10.

So congratulations, Microsoft. The Windows 11 hardware situation was already a disaster and now it’s actually somehow worse than before.