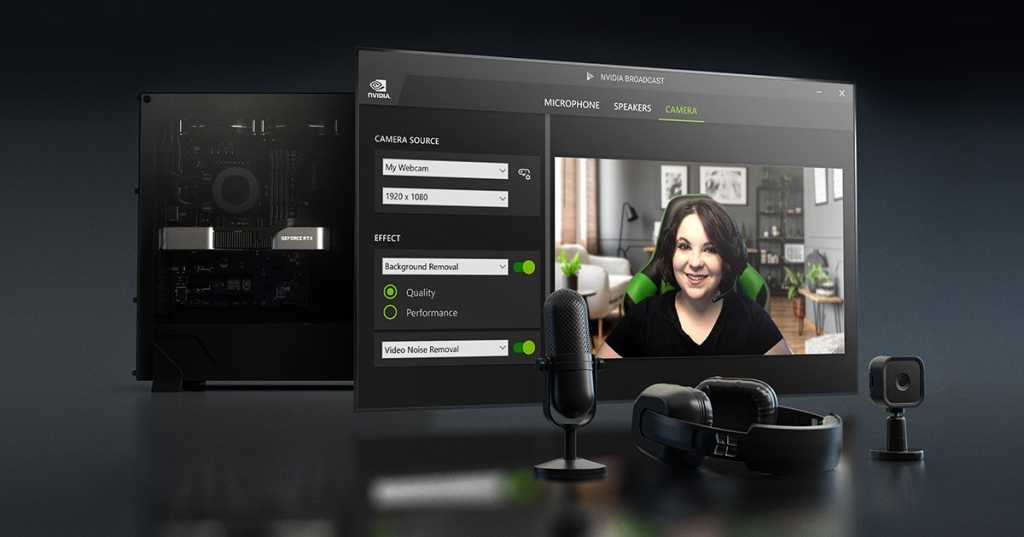 As incredible as Nvidia Broadcast’s AI-powered software is for RTX graphics card owners, its features haven’t been perfect. Take background noise removal. Get too excited, and on occasion, your voice gets muted as unwanted noise. With the release of version 1.3, Nvidia is eliminating that problem, plus adding more camera support for its virtual greenscreen effects and reducing Broadcast’s impact on system resources.

Of Nvidia Broadcast’s four main features, the borderline magical RTX Voice may be its best known. Available to RTX and GTX card owners, its elimination of ambient sounds is the only feature also supported on older cards. Barking dogs, household chatter, roaring vacuum cleaners—RTX Voice keeps that unwanted audio from seeping into video calls and livestreams. But now and then, it would also mute the primary speaker when they spoke too loudly or at a higher pitch, usually during moments of high emotion on livestream. Now, Nvidia says new training sound profiles will eliminate that problem.

Support for virtual greenscreen effects also gets a boost, with more camera sources added to the list. The expansion includes first-party webcam utilities for Canon EOS, Nikon, and Sony cameras, as well as OBS Virtual Camera.

Finally, while visual noise removal and dynamic subject tracking remain the same, using them and/or the other two Broadcast features at the same time won’t hit your system performance as hard. Nvidia says Broadcast v1.3 uses 40 percent less VRAM, and should give you back higher framerates while gaming. (Remember that all these effects run alongside your games, and are powered by the dedicated tensor cores in RTX GPUs.)

You can catch the full details of Broadcast v1.3 on Nvidia’s site. Or you can just head straight to the Nvidia Broadcast website to download the update. And our own guide to the best graphics cards can help pinpoint the right RTX GPU for you if you need to upgrade your hardware to start using this wonderful utility—if you can find a graphics card for sale, that is.