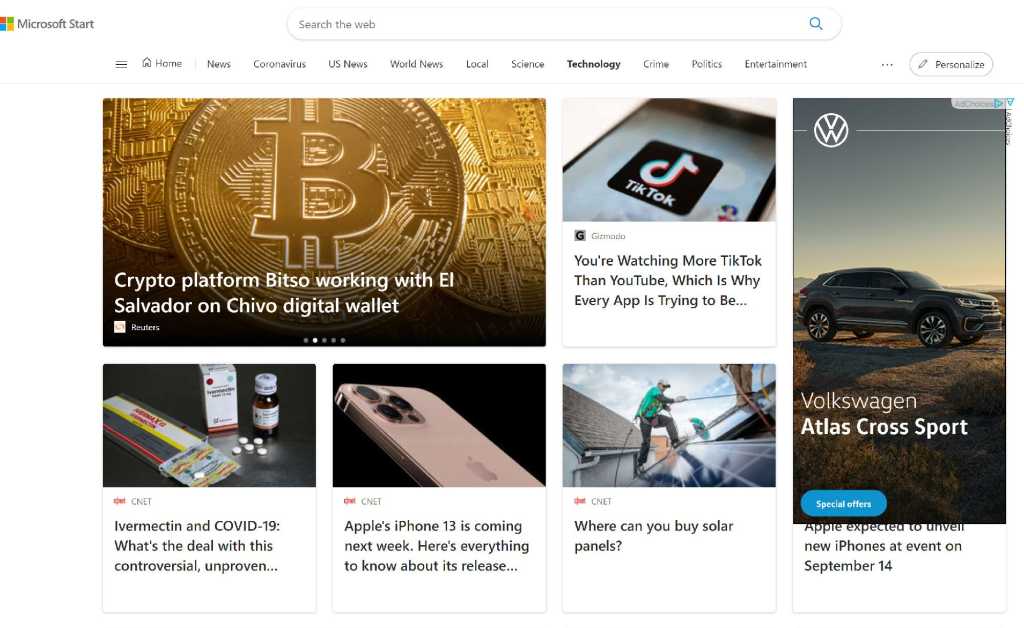 Microsoft now has a Start menu and a Start feed, within both Windows 10 and Windows 11.

Microsoft’s ongoing new efforts took a new turn on Tuesday, as Microsoft rebranded its news feed to Microsoft Start. You’ll see the new name appear where Microsoft’s news appears: on Windows 10’s News & Interests popup, within Windows 11’s Widgets, and on a standalone website, MicrosoftStart.com. The “new tab” page within Microsoft Edge will also show headlines from the Microsoft Start news feed, if you have it set up to “informative” mode. A mobile Microsoft Start app is also available.

Both Microsoft and Google curate news from leading publishers, though Microsoft has done it for far longer: over 25 years, according to a blog post authored by Liat Ben-Zur, corporate vice president of Microsoft’s Modern Life and Devices Product Marketing. The idea behind the new branding, she said, is that you’ll be able to “start” your day with Microsoft’s branded collection of news.

The Microsoft Start feed you’ll see is actually a curated collection of news, which Microsoft either algorithmically tailors to your interests or that you can manually tune, as our previous story on Microsoft’s News Bar explains. Microsoft collects its news from over a thousand publishing brands.

(Ironically, News Bar wasn’t mentioned in Microsoft’s announcement of Microsoft Start, implying that the beta app will either remain in beta or will be discontinued. After this story was published, Microsoft told us that the “the News Bar project was released as Beta in the Microsoft Store and will continue to exist as an independent offering.”)

Interestingly, some of the personalization features appear to be available on Windows, but not on the website. For example, if you don’t think a story about pandemic checks or ivermectin should be showing up in your technology feed, there doesn’t seem to be an easy way to block the publisher from your online news feed. In the Windows 10 News & Interests popup, however, a small “ellipsis” menu to the right of the story allows you to hide stories from that particular publisher.

What Microsoft’s news feeds do do, however, is allow you to read stories from premier publishers like The Washington Post without the need to pay for them. Microsoft pays those subscription bills on your behalf, allowing you to Start reading your preferred news when you want.

This story was updated at 11:14 AM to include a Microsoft statement on the News Bar app.