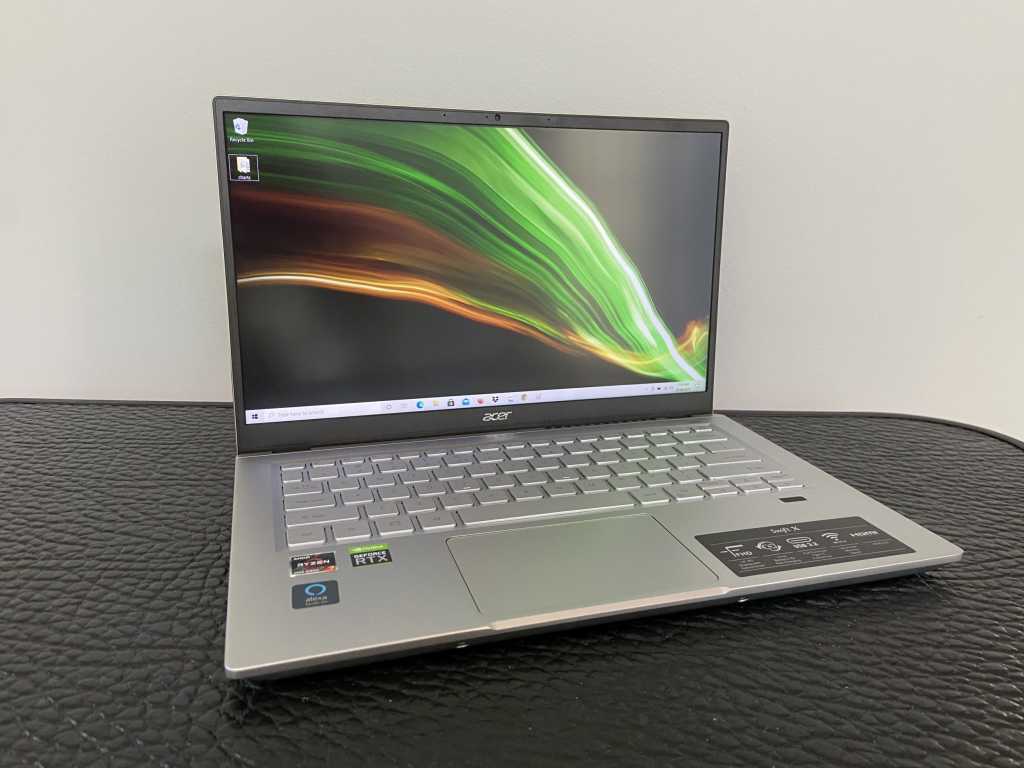 Billed as an ultraportable for creative pros, the powerful Acer Swift X is a better fit for students looking for a highly portable laptop with some gaming chops.

The Acer Swift X packs impressive power inside an ultraportable case and is a great pick if you want a high-performance, highly portable laptop. Where most ultraportables prize efficiency and rely on integrated graphics, the Swift X serves up Nvidia’s GeForce RTX 3050 Ti GPU for an added punch. With the RTX graphics and a powerful AMD CPU, the Swift X is able to handle content-creation tasks and some gaming in addition to the basic office chores for which most ultraportables are built.

The Swift X doesn’t toss efficiency out the window and provides ample battery life despite its power-hungry parts. You’ll need to put up with a frequently loud fan and warm keyboard, however, and the system’s fit and finish is not on par with that of other premium ultraportables. Make sure you need the graphics prowess of the Swift X before committing because you are forced to sacrifice in other areas to get it.

The Swift X features a thin, aluminum chassis that’s available in three colors: Steam Blue, Prodigy Pink and Safari Gold. We received the gold model, but only parts of the laptop come draped in the hue: the lid, a narrow strip above the keyboard and the display hinges. The rest of the laptop is silver in color, resulting in a two-tone look that lends an OEM feel to the system. The matte black plastic display bezels also earn a design demerit.

The aluminum chassis is quite compact. It’s roughly the same size as another high-powered 14-inch laptop, the HP Envy 14. Both are only 0.7 inches thick, and the Swift X at 3.1 pounds is a few ounces lighter than the 3.3-pound Envy 14. The Swift X’s power brick is also compact, resulting in a reasonable and eminently totable 4-pound total carrying weight.

When you open the display, the hinges dip down below the bottom panel to provide a slight tilt for the keyboard for a more comfortable typing angle and to improve airflow. With its high-end components packed into such a compact enclosure, the Swift X needs all the aid it can get to keep thermals in check. The laptop is fairly quiet during basic tasks, but the cooling fan really begins to spin when it’s engaged in heavier lifting. While running Photoshop and other graphics apps or during games, the Swift X gets loud. And even with its cooling fan working overtime, the laptop begins to heat up to the point that the keys feel rather toasty under your fingertips.

The keys themselves feel snappy and sound quiet, but two things annoy me about the keyboard. For one, the keys are silver instead of black, which leaves little to no contrast when the keyboard backlighting is on when you are sitting in a room that’s not completely dark.

For another, the Page-up and Page-down keys are squeezed in above the side arrow keys and I hit each constantly by accident. I’d much rather these keys be mapped to another key or placed anywhere else than their current spot. Below the arrow keys is a fingerprint reader for easy, secure logins. The webcam lacks IR capability, so the fingerprint reader is the only biometric option on the Swift X.

The touchpad felt accurate with smooth gliding and a firm, responsive click. I take no issue with the touchpad, but I do have a gripe about the AMD, Nvidia and Alexa stickers to its left. They are placed in such a haphazard fashion that their crooked and ill-spaced positioning detract from the Swift X’s overall appearance. Acer’s sticker affixer needs to get it together.

The 14-inch display features a full HD (1920×1080) resolution and 100-percent sRGB support. Its image looked bright with vibrant color and good contrast. The biggest issue I have with the display doesn’t concern its performance but its size. Quite simply, it feels too cramped for serious design work. It has a 16:9 aspect ratio, which limits the amount of vertical space it affords compared with a 16:10 display. The HP Envy 14 features a roomier 14-inch, 16:10 display that’s a better fit for creative work. Even a 13.3-inch MacBook Pro feels more spacious than the 14-inch Swift X because Apple’s laptop displays feature a 16:10 aspect ratio.

Above the display is a standard 720p webcam. You won’t wow your fellow Zoom conference attendees with its noisy image and reddish skin tones. The webcam also lacks a physical privacy shutter.

The speakers, too, failed to impress. They didn’t reach a loud level at max volume and produced predictably tinny sound. They also fire downward, which doesn’t help the situation.

The Swift X’s port selection covers the basics with both USB Type-A and Type-C ports, although I’d like a pair of USB-C ports and one USB-A port instead of the flipside of that. The USB-C port offers 10Gbps data transfers, DisplayPort support, and power delivery. Creative pros whose work requires the use of media cards will bemoan the lack of an SD card slot. The laptop supports the latest wireless networking standards — WiFi 6 and Bluetooth 5.2 — but omits an Ethernet port. You’ll also find an HDMI connection.

Our first benchmark is PCMark 10, which measures performance on everyday computing work including office productivity tasks, web browsing, and video chats. The Swift X was the clear winner, beating the next closest system by more than 1,000 points.

Next up is Cinebench, a sort of CPU sprint that stresses the CPU rather than the GPU and makes use of all processing cores. The Swift X dominated here on the multi-threaded test for the simple fact that its Ryzen CPU has twice the physical cores and processing threads than the chips in the other systems. The Ryzen 7 5800U is a threaded, eight-core processor, and the Intel Core i5-1135G7 and Core i7-1165G7 are threaded, four-core chips. Twice the cores and threads leads to the Swift X posting a Cinebench score that’s nearly double the score of the Swift 3X and more than double that of the others.

The Swift X also performed well on the single-thread test of Cinebench, although not to the degree of the multi-threaded test.

We use the HandBrake utility to convert a 30GB movie to Android table format, an intensive task that taxes the CPU and all of its cores. Again, the Swift X blasted the competition. It completed the test in nearly half the time of the HP Envy 14, its next closest competitor.

The Swift X and its RTX 3050 Ti graphics more than doubled the output of the laptops with integrated Intel graphics on our 3DMark benchmark. The HP Envy 14 and its GTX 1650 Ti Max-Q performed admirably but its score was still a considerable distance behind that of the Swift X. The Swift X has the graphics oomph to handle content-creation chores.

Because the Swift X features discrete graphics from Nvidia’s latest lineup of GPUs, we ran a few games on the system. On Shadow of the Tomb Raider at 1920×1080, it averaged 48 frames per second at the Highest preset. On the more demanding Metro Exodus at 1920×1080 at the benchmark’s Extreme preset, and the Swift X averaged only 16 fps but improved to 52 fps at the Normal preset. Keep the quality settings in check and you’ll achieve playable framerates at 1080p. With its compact design and graphics muscle, the Swift X could make a good fit for people who want an easily portable laptop to take to class or around the office each day that also has some gaming chops when you get back to your home or dorm — once homework is done, of course.

We test laptop battery life by looping a 4K video using the stock Windows Movies & TV app, with screen brightness set to about 250 nits and the volume dialed to 50 percent, with headphones plugged in. The Swift X doesn’t offer the longest battery life among ultraportables, but it lasted for more than 12 hours on our battery-drain test, an impressive result given its high-powered parts.

There’s no question that the Acer Swift X provides enough CPU and GPU performance for on-the-go content creators. With an octo-core Ryzen 7 5800U, the Swift X offers blazing application performance and strong multimedia performance. Add in the RTX 3050 Ti graphics, and you get a considerable boost in 3D graphics and gaming capability from the ordinary ultraportable with an integrated GPU. It’s rare to find a laptop this compact with this much performance. And you aren’t forced to sacrifice all that much in battery life for this power.

What prevents a stronger recommendation for creative types is the Swift X’s cramped display. In particular, the 16:9 aspect ratio makes the screen feel restrictive. I’m not saying you need a 15.6-inch or larger laptop to run Photoshop and other media-creation and -editing apps, but I would argue you need at least a 14-inch display with a 16:10 ratio. The 14-inch, 16:9 display isn’t a barrier, however, for gamers to pick the Swift X. It’s a better fit as a laptop for students or office workers: light enough to carry around each day and powerful enough to play games each night.