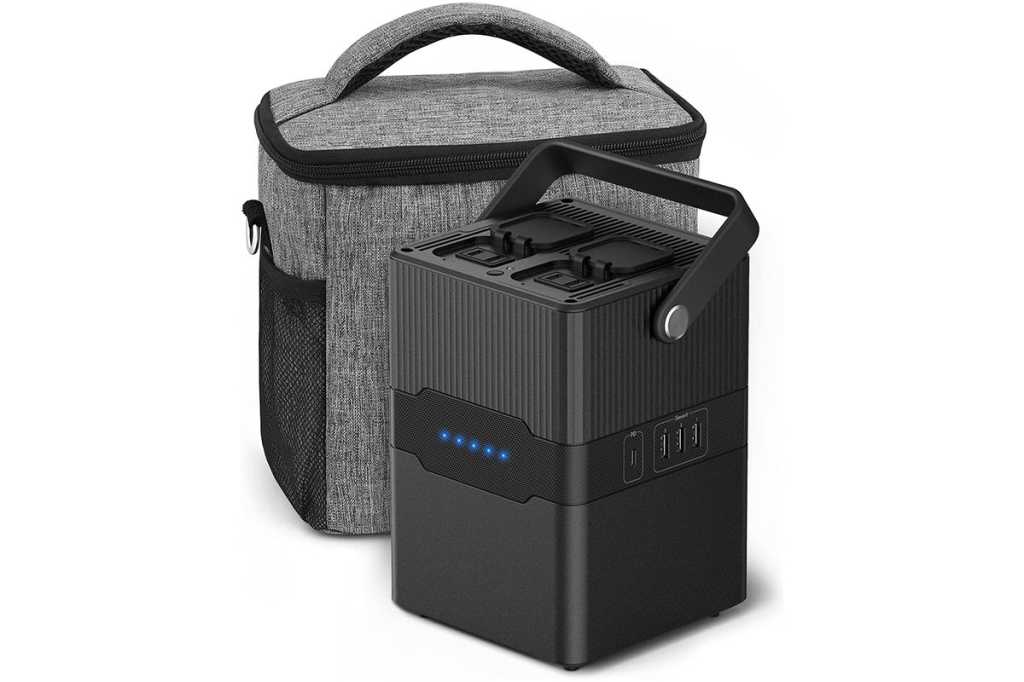 RavPower’s 252.7Wh Power House is a handy companion for your off-the-grid power needs, and happens to be affordably priced to boot.

I’ve been quiet for the last few months, but I can explain. I was tasked with testing several power stations, ranging from affordable to almost too expensive. The goal? Find a range of portable power stations for all budgets and use cases.

Admittedly, testing took far longer than I expected. But, alas, here I am, ready with the first review born out of months of testing, frustration, and more testing.

First up is the RAVPower Portable Power Station 252.7Wh Power House, a $179 powerhouse that looks more like a portable speaker than something you’d plug a 110v gadget into, or that could power a lamp for 37:26 minutes. But I’m getting ahead of myself.

Included in the box with the power station is a soft carrying case for holding the station and the included 110V DC charger. Using the bundled DC charger, I was able to go from empty to full in 6 hours and 23 minutes, or 23 minutes longer than RAVPower’s published estimate. Alternatively, you can charge the station using a 60W PD adapter through the USB-C, which should charge the station in just under 5 hours.

As its name implies, this power station has a total capacity of 252.7Wh, or 70,200mAh. To put that into perspective, the current iPhone 12 Pro has a battery capacity of 2,815mAh. The tall, cube-like design is all black, with a handle on the top. There are feet on the bottom of the station that hold it off the ground slightly, but also prevent it from slipping off a smooth surface. Buttons and ports are distributed among the station’s four sides: on one side, indicator lights reveal the station’s charge level; another side has the power button and a flashlight; the third has two DC ports (one incoming, the other outgoing); and the fourth side has three USB ports and a lone USB-C PD port.

On the top of the housing, you’ll find two 2-prong 110V outlets, along with a power button and another indicator light.

Two of the USB ports max out at 12W total, while the third one, and you’ll know which one it is because it’s green, is capable of 18W max output. The USB-C port can accept or dish out up to 60W of power, and for any of the ports, you don’t need to turn on the power station first. Just plug in your USB cable, connect your phone or tablet (or what have you), and it’ll start charging.

Using the 110V outlets works a little differently. You can get 250W from a single outlet; if you use both outlets, you’ll max out at 300W. Before the AC outlets are active, you’ll need to press and hold the small button between the two outlets until the indicator light turns on. Now plug in something like a lamp or laptop charger (as long as it doesn’t have a three-prong ground plug.)

When testing all of the power stations I have on hand, I used a PortaPow power monitor to measure the amount of energy a power station used while connected to a DROK load tester. For the RAVPower, out of a total of 252.7Wh of power, I measured 234.465Wh of energy used before the station turned off. That gives it an efficiency of 92.78 percent, with the average efficiency for reviewed power stations currently sitting at 87.25 percent.

Another part of the test for each power station was to connect a 4W desk lamp to one of the station’s 110V outlets with a full charge. I turned on the lamp, and left it on until the power station ran out of juice. The lamp turned off after 32 hours of continuous use, but when I pressed the power button to ensure it was completely drained, the lamp lit back up for another 4 hours and 29 minutes (bringing it to a total of 37 hours and 26 minutes).

Overall, the RAVPower Portable Power Station 252.7Wh Power House punches above its weight. It’s one of the most affordable power stations I’ve tested, and it performed very well. The inclusion of a bag to carry it, a 6 hour charging time and a high efficiency make it perfect to toss in the trunk of your car for a weekend camping trip or keep charged in your hallway cabinet for the occasional power outage. If nothing else, you’ll be able to keep your phones and tablets charged and yourself entertained until service returns.