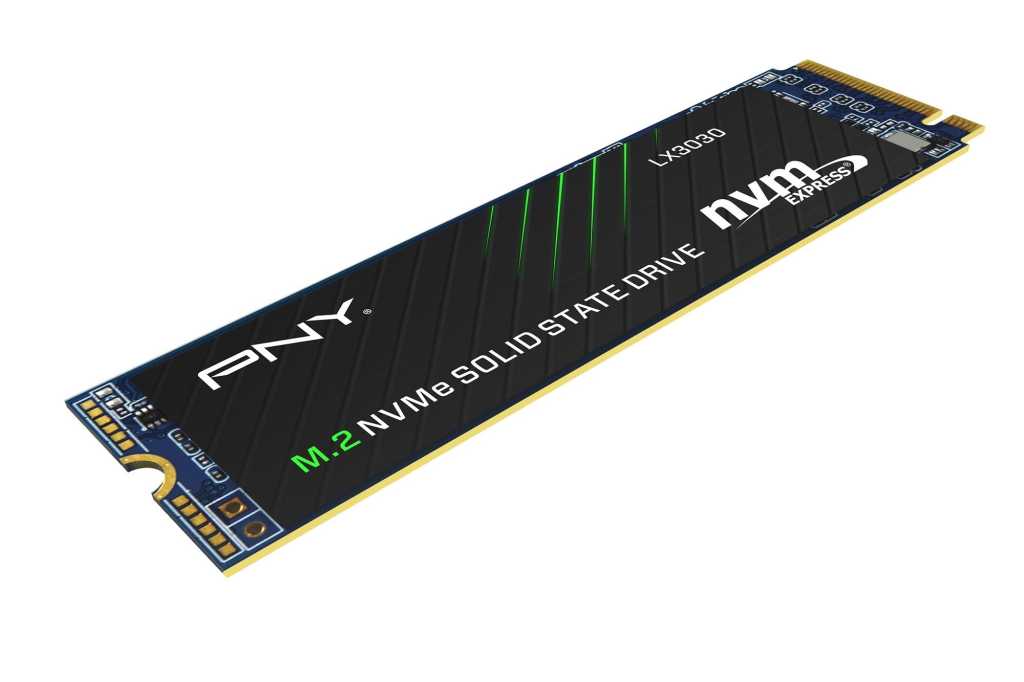 PNY’s new LX3030 NVMe SSD isn’t for everyone. It’s marketed directly at Chia cryptocurrency plotting, a very high-bandwidth sustained write task. If you want some info on how much data Chia requires, you can find it here. But if your workload involves something similar, such as continuous large-scale backup, video encoding, or anything else that involves writing lots and lots of data, it might also be of interest.

Why? The LX3030 is the fastest PCIe 3.0-based sustained writer we’ve tested and its TBW (TeraBytes that can be Written) ratings are astounding: 27,000TBW per 1TB of NAND. Seagate’s scorching fast FireCuda 530 is rated for 1,250TBW per terabyte—a lot of data by normal standards, but shy one zero compared to the PNY’s rated durability.

The catch? When I say the LX3030 is not for everyone, I mean it: the 2TB version I tested is priced at $1170—more than twice what the aforementioned FireCuda 530 costs. Gulp.

The rest of the LX3030 story is rather mundane. It’s a four-lane PCIe 3 drive in the standard 2280 (22 mm wide, 80 mm long) M.2 form factor. PNY was extremely tight-lipped about details. Peeling back the label, however, revealed a Phison PS5012-12ES-32 controller, eight unknown 3D NAND chips (I found no Web entry for the chip numbers), and two Kingston 1GB DRAM chips.

So why is PNY willing to offer these super large TBW ratings? To quote the company “The LX family of SSDs utilize Lifextension technology, a combination of an advanced AI Engine, LDPC and Flash I/F to deliver ultra-high plotting endurance.” Okay. That doesn’t really tell us a lot, but for the record: LDPC is Low-Density Parity Checking; AI is the imitation of human intelligence—completely inappropriate in this circumstance so I’ll call it an advanced algorithm; and I/F is simply flash interface.

Just pure speculation: the drive is heavily overprovisioned so more cells are available as replacements, or as PNY claims, there’s special sauce in the controller firmware and the NAND is super reliable. Or…

Truth be told, price, warranties, and TBW ratings are joined at the hip. Drives that carry high TBW ratings and longer warranties are more expensive because the vendor stands a higher likelihood of having to replace it.

There’s been scuttlebutt around the industry for years that NAND is far more durable than most ratings indicate. Also, controllers have become aces at maximizing speed and/or longevity. Addtionally, it’s a well-known fact that most users don’t write nearly as much data as they think they.

54,000TBW is writing a 30TB of data everyday for the five years of the 2TB drive’s warranty. That’s a lot of data. “Chia plotting” amounts of data I’ve been told.

PNY’s TBW ratings in the LX family spec sheet are open to interpretation and don’t exactly match those in other advertising. The 1TB version is covered by the aforementioned 27,000TBW, but the warranty is for only two years.

The only other drives I’ve seen with higher TBW ratings than the LX3030’s are Intel’s pure Optane SSDs, which are even pricier, but rated in the petabytes! If you can find one. They were discontinued in early 2021.

The 2TB LX3030 I tested was strictly mid-tier in its overall performance. 3GB writing and 3.4GB reading are very fast (it’s PCI 3 only, remember), but it can’t touch something like the Seagate FireCuda 530 for everyday workloads. If bleeding edge performance or PCI 4 support are what you’re looking for, look elsewhere—this SSD is about endurance.

This so-so overall performance may well have something to do with the special NAND handling PNY claims is involved in promoting longevity. Rigorous error-checking, wear-leveling (spreading writes over all the NAND), and finer voltage control might indeed make for slower performance.

The LX3030 was the slowest among the pack in CrystalDiskMark 6, as well as in our real world 48GB transfer tests shown below. It’s likely not fair to compare the LX3030 to drives like the FireCuda 530, Samsung 980 Pro, or Adata S70 Blade, but the LX3030 is far pricier than all of those so we couldn’t in good conscience put it up against budget wonders.

Where the LX3030 took flight was in our 450GB write test. It bested all other drives by at least a couple of seconds, and in fact, turned in the best time we’ve seen over PCIe 3. PNY is apparently serious about the SSD being designed with Chia plotting in mind.

The LX3030 does what it needs to, but of course I’d like to see a PCIe 4 version. Only PNY (and likely Phison) knows if it could pull the superior endurance out of faster transfer rates.

The PCIe 4 testing was done on an MSI MEG X570 motherboard socketing an AMD Ryzen 7 3700X 8-core CPU, using the same Kingston DRAM, cards, and software. All testing is performed on an empty, or nearly empty drive that’s TRIM’d after every set of tests. Performance will decrease as the drive fills up. If your drive, given similar hardware, does not perform similarly, please let us know.

The LX3030 is pricey and then some, so you really need to be sure that you’re writing the amount of data that’s required to make full use of its longevity. That’s likely Chia plotting. If so, then you’ll appreciate the peace of mind the LX3030’s ratings and warranties provide.

Otherwise, look to the far less expensive competing drives shown in the charts, all of which also offer superior performance, plenty of durability, and also support PCIe 4 for future-proofing.

Note that PNY, along with several other companies has been known to swap to slower components in their less expensive products. I can’t see that happening with a product of this price or ilk, but it needs to be mentioned.