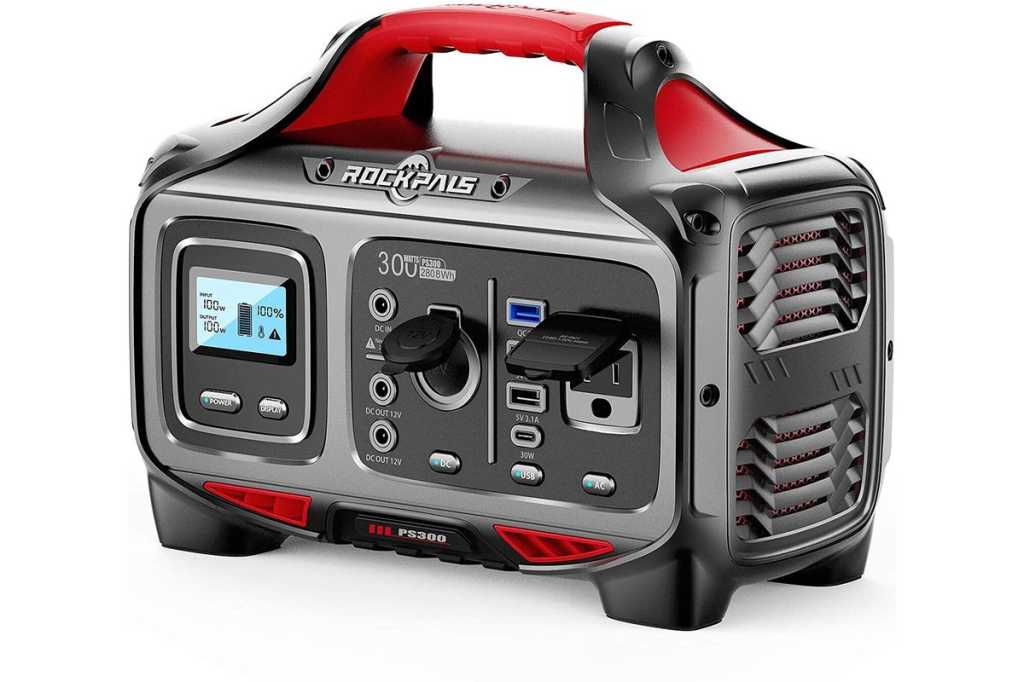 RockPals
At a Glance

The latest RockPals 300W Portable Power Station leaves out some of the nice perks of the previous version, while offering a smaller footprint. It’s a capable backup power source, but has some quirks that you should beware of.

Previously, I reviewed the RockPals 300W portable power station and rated it 4.5 stars. It had reliable performance, plenty of ports, and a large display that kept you up to speed on everything the power station was doing.

Now I’m taking a look at a device that has the same exact name, but a completely different design. The updated power station lost the dual flashlights, has been shrunk down quite a bit, and the screen no longer details every aspect of the station’s performance.

There are a total of nine ports, all on the front panel of the 300W power station. There are two DC-out barrel ports capable of 12V/60W. There’s a DC input, which you use with the included power adapter to charge the unit itself. And next to the DC ports is a 12V car charger.

The rest of the ports include a blue USB port that’s compatible with QuickCharge 3.0, two more USB ports that provide a charging rate of up to 5V/3.1A, and below them, a 30W USB-C port. Lastly, there’s a single 110V AC outlet that can handle 300W of output.

Each section of ports has its own dedicated power button that you have to turn on before the station will start providing power to whatever’s plugged in. To the left of the ports is a small screen that shows a battery meter, battery percentage, and wattage for input and outputs when in use.

The handle on top of the power station provides plenty of room between it and the housing.

Rated for 300W of output, the station has a total capacity of 289Wh, just like the previous model. However, this model’s efficiency scored a little lower than its predecessor. Using a PortaPow power monitor and DROK load tester connected to a USB port, I recorded that 252.75Wh, or 90.01 percent of total capacity was expended before the station powered down.

As a secondary power test, I connected the RockPals 300W to a 4W desk lamp and monitored how long the station could power the lamp before it turned off. In total, the lamp was lit up for 30 hours and 5 minutes. But that wasn’t continuous. After about 8 hours, the station would turn itself off and with it, the lamp. RockPals told me that because of the low power draw of the lamp, the power station turns itself off as a safety feature. It’s not a deal-breaker, but something to keep in mind if you end up using this station with a low-wattage device.  As for charging the device itself, I was able to go from empty to full, using the DC imput and adapter, in 5 hours and 5 minutes with a charging rate of 68W.

I had high hopes for the latest RockPals 300W, but I’m left somewhat disappointed. The new smaller design is an upgrade over the previous version, but the lack of lights and a smaller display aren’t worth the smaller footprint. That said, if you’re looking for a power station for a weekend trip or to keep around in case of a power outage and you want to spend around $200, the RockPals 300W is worth considering. Just don’t rely on it to power a critical piece of equipment.