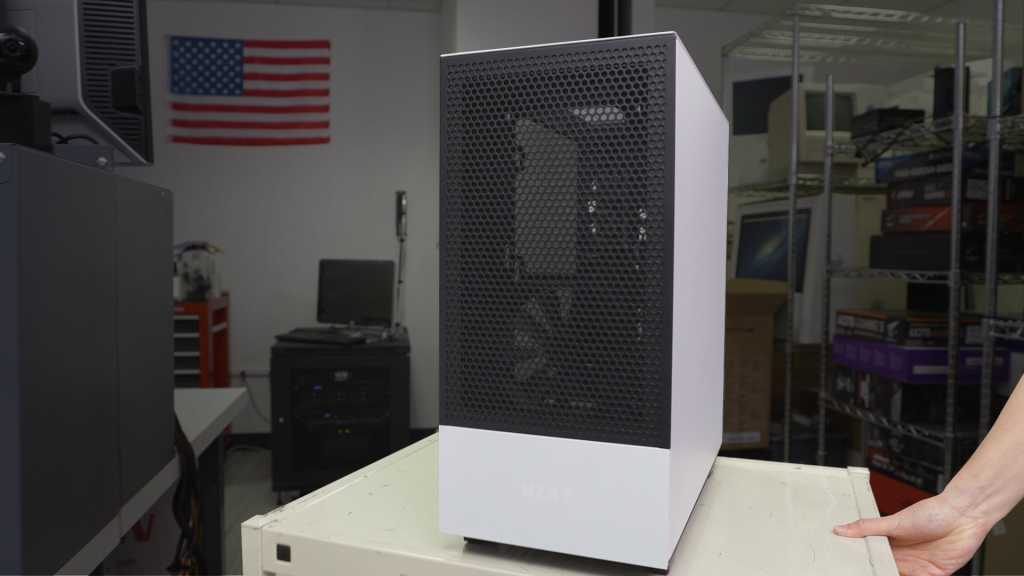 Glance at the NZXT H510 Flow, and it looks about as you’d expect given current sensibilities. Optimal airflow dominates the scene at the moment. Most new cases now feature mesh front panels, and the H510 Flow is no different.

Yet the Flow represents a shift on NZXT’s part, as you’ll see in the video above. The standard H510 has long sported a solid front panel, as did the H500 and S340 before it. And despite its critics, the case has enjoyed wild popularity. PC builders love this compact ATX mid-tower’s smaller footprint, thoughtful and straightforward design, and minimalist vibe.

But general trends have had their influence, with a result that should quiet most naysayers. NZXT put a steel mesh front panel on the body of the H510, complete with removable dust filter, and made minor additional tweaks. Namely, the two included 120mm fans come mounted at the front and rear, instead of the top and rear. (The standard H510’s smaller air intakes on the right side panel and the bottom front of the case are gone, too.) You’ll find no other changes to the chassis aside from airflow improvements; PC builders still get the same H510 otherwise. The removable hard drive cage, front fan/radiator bracket, and signature cable bar remain so for ease when building.

As for performance of this new H510 variant, NZXT’s sample benchmark results show a drop in CPU temperature—a difference of 8 degrees in the company’s 280mm AIO-cooled 11900K test system. But GPU temperatures remain about the same, with barely a 1 degree difference between the H510 Flow and H510 Elite (which has a tempered glass front) with the same parts.

Given its MSRP of $110, the NZXT H510 FlowRemove non-product link should tempt many looking for an affordable airflow case when its estimated launch date of October 18 rolls around. Despite shipping woes affecting its cost and availability, this case remains competitive with well-lauded, similarly priced rivals like the Corsair 4000D AirflowRemove non-product link and Lian Li Lancool IIRemove non-product link. The biggest threat to the Flow is the $70 Montech X3Remove non-product link, which costs $40 less, includes a whopping six RGB fans, and has favorable reviews. But the X3 does lack the the absolute sleekness of the H510—so NZXT may still get to hang onto its popularity.