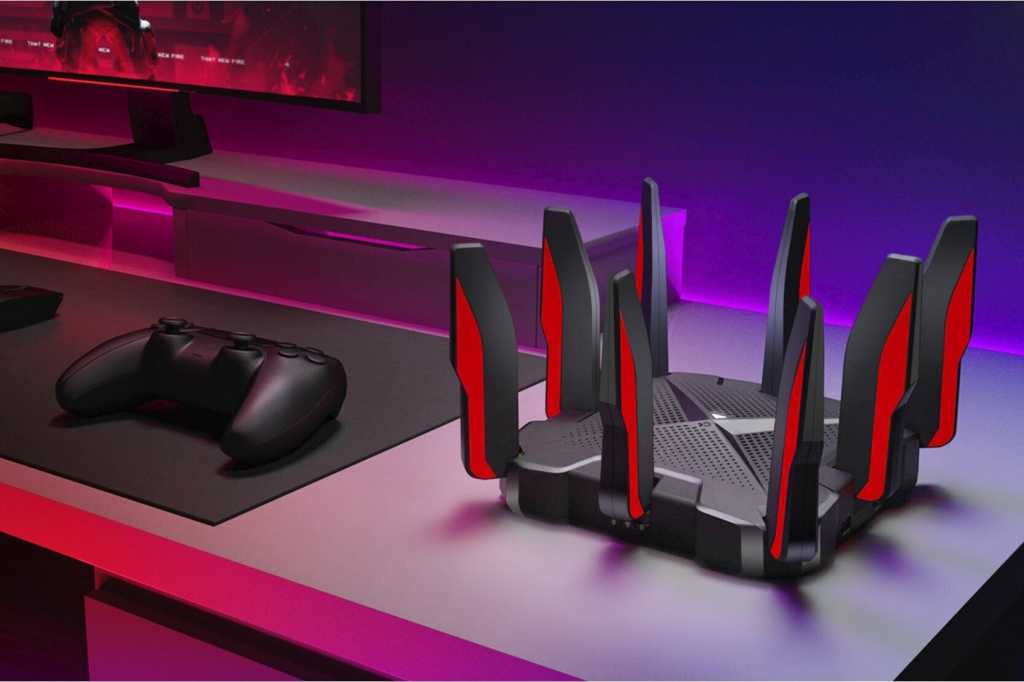 TP-Link’s newest gaming router, the Wi-Fi 6 Archer GX90 (which we first wrote about as part of our CES coverage in January, 2020), has finally gone on sale at Amazon and other retailers for MSRP $249, undercutting a lot of its competition in the tri-band Wi-Fi 6 gaming router space by a fair amount—assuming it holds up well.

You could think of the Archer GX90 as part of a second wave of Wi-Fi 6 routers, after several major manufacturers, including TP-Link, released their early-adopter units starting in late 2019. As such, it’s unsurprising that its specs look better than the similarly priced and very solid ASUS RT-AX86U, for instance.

The GX90 is a tri-band router powered by a 1.5GHz quad-core chip, and promises combined throughput of up to 6,579Mbps, and what they say is lag-reducing “enhanced” OFDMA (that’s Orthogonal Frequency Division Multiple Access—a signal modulation technique that allows a router to communicate with multiple devices simultaneously). Here’s your obligatory disclaimer that performance claims by router companies tend to be based on lab tests and theoretical maximums, so don’t get too stuck on specific numbers when you set your expectations. Typical throughput on a single device using normal gear will be determined by a large number of factors, including signal strength, wireless interference, wireless capability of your device and, of course, the speed you’re getting from your ISP (as it relates to internet speed, anyway).

TP-Link says the Archer GX90 will also come with a dedicated gaming band with what it calls “HE160 technology.” This is likely referring to the gaming band operating with 160MHz channel bandwidth, which is going to allow for greater throughput for those devices which support it (Intel’s AX210 wireless card, for example). For reference, many modern wireless cards don’t go above 80MHz. HE, in the parlance of wireless networking, normally denotes the term “High Efficiency,” which in this context is shorthand for the modulation and coding standards that make Wi-Fi 6 a lower-latency protocol than earlier standards.

For those who look askance at wireless gaming, the GX90 will also have a 2.5Gbps WAN/LAN port, although this really has better implications for local network-attached storage, unless you’re one of the lucky few with access to 2Gbps service from your ISP. The GX90 will also have two USB ports, as well as the characteristic eight antennas arrayed around its square body, like the Archer C5400X before it, which are used to improve signal strength through improved beamforming.

Other features include a gamer-specific UI, gaming-tuned traffic prioritization for compatible games, built-in network security features that promise to insulate your network from infected devices, check sites for malicious intent, and prevent attackers from invading via vulnerable ports. Antivirus protection is offered here, as well, and all of this is included in TP-Link’s HomeCare system, which is included at no additional cost to users—a nice perk.

Lastly, the router is compatible with TP-Link’s OneMesh system, meaning users who have any of the company’s mesh routers should be able to easily integrate this one into their system.