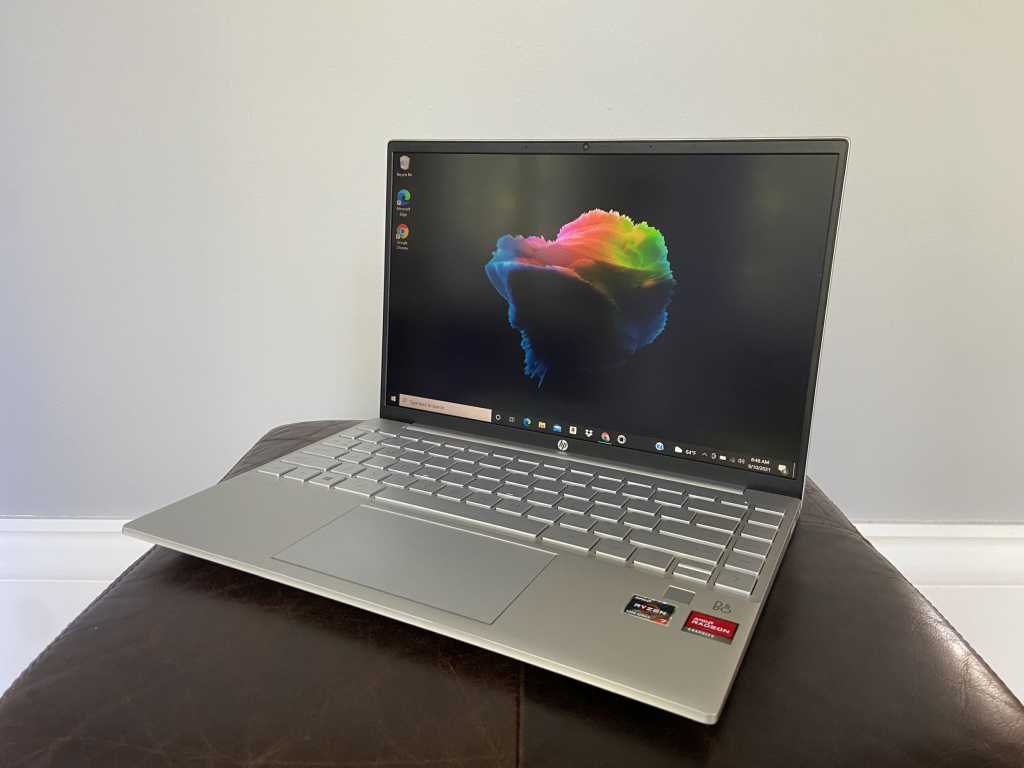 You won’t find more power from a lighter laptop at its price than the HP Pavilion Aero 13, a 2.1-pound charmer based on AMD’s stellar Ryzen 7 5800U CPU.

The trusty Pavilion has come a long way. With a magnesium aluminum chassis that looks elegant and feels durable and impossibly light, the HP Pavilion Aero 13 looks and feels more like a model from the company’s higher-end Envy or Spectre line than a mainstream Pavilion. And yet the Pavilion Aero 13 line starts at a reasonable $750.

Despite its light price and weight, the Pavilion Aero 13 is roomy and powerful. The laptop is based on a 13.3-inch display with a 16:10 aspect ratio that makes the display feel more spacious than a standard 16:9 display of the same size. The keyboard runs from edge to edge and feels spacious along with the generously proportioned touchpad. Powering this perfectly sized laptop is an 8-core AMD Ryzen 7 processor that’s no lightweight CPU. Our $999 test system is a great pick for students or anyone looking for tons of style and portability at a great price.

The entry-level model in the Pavilion Aero 13 series costs $749.99Remove non-product link and features a Ryzen 5600U CPU, 8GB of RAM and a 256GB SSD. Customization options include four color choices, a display resolution upgrade, and keyboard backlighting. Our $999.99 test system features the silver color option, the base display resolution, and no keyboard backlighting.

Color will cost you. The silver chassis comes free of charge, but the three other color choices—Warm Gold, Pale Rose Gold, and Ceramic White—add $20 to the bill. The Natural Silver option looks spiffy enough, although I’d prefer black keys with white lettering as opposed to the Pavilion Aero 13’s silver keys with gray lettering. In certain light, there’s not enough contrast between the keys and lettering. And our system lacks keyboard backlighting, which doesn’t help the situation. Keyboard backlighting ought to come standard. Instead, it’s a $20 upcharge.

The key attraction of the Aero 13 is its extreme portability. You’ll be amazed at how light it feels when you first pick it up. It weighs only 2.1 pounds, which is considerably less than other similarly sized laptops, including HP’s premium 13.3-inch Elite Dragonfly Max that weighs 2.6 pounds and the sleek 13.4-inch Razer Book 13 that weighs a full pound more at 3.1 pounds. The Lenovo ThinkPad X1 Nano weighs less at just under 2 pounds but it has a slightly smaller 13.0-inch display (and a much higher price).

You might worry about the Aero 13 being so light to the point of feeling flimsy. I certainly was when HP launched the product but not after I had it in my hands. The laptop feels very sturdy, with a all-metal chassis that’s far from flimsy. The lid behind the display feels rigid, as does the keyboard deck.

The keyboard feels firm with little to no flex underneath your fingertips when typing. In fact, other than the color of the keys and the lack of backlighting, I have no complaints about the keyboard. The keys offer snappy feedback, and no keys were shortened to fit the keyboard on the 13.3-inch enclosure. I appreciate the column of keys on the far-right of the keyboard for the Delete, Home, Page-up and -down, and End keys. I much prefer this arrangement to squeezing these keys next to the arrow keys or shortening the right-Shift key to accommodate them. The left- and right-arrow keys are full sized as is the right-Shift key. I was immediately comfortable typing on the Pavilion Aero 13.

Below the arrow keys is a fingerprint reader. The laptop lacks a Windows Hello-compatible webcam, leaving the fingerprint as the only biometric option for secure logins without needing to key in a password.

The touchpad, too, made me feel right at home. It’s larger than your average laptop touchpad at 4.5 by 2.6 inches and offers accurate and smooth mousing with a firm and quiet click response.

There’s a lot to like about the display, from its 16:10 aspect ratio and thin bezels to its rated 400 nits of brightness and anti-glare finish. Unless you plan to watch movies on your laptop the vast majority of the time, a 16:10 screen ratio is a better fit than a wider 16:9 display. A 16:10 screen is taller, providing more room vertically so you can scroll less and generally have more room to multitask and juggle windows.

Thin bezels frame the display on all four sides to create a compact package. The added verticality of the display does not result in an awkwardly deep laptop from front to back. The Pavilion Aero 13 looks well proportioned.

One feature lacking on the display is touch support, but without it you get a matte coating on the display that does an excellent job at combating glare and reflections. Colors didn’t pop on the display, but they looked accurate—the screen offers 100-percent sRGB support. Rated at 400 nits, the display is brighter than many panels found on laptops at or below $1,000, which typically carry max brightness in the 250-nit to 350-nit range.

A standard 720p webcam sits above the display. It produces an average image that suffers from some noise and oversaturation. It lacks a physical privacy cover for peace of mind when the camera is not in use.

For such a thin and light laptop, the speakers offer surprisingly good sound. They are tuned by Bang and Olufsen and fire downward from either side of the laptop. They aren’t as muffled as most downward-firing speakers because they are positioned on a beveled edge on the underside of the laptop, which keeps them from sitting directly on your desk or lap. Bass response is lacking, and the simple equalizer offered on the B&O app did nothing to improve it or any other part of the audio output. Still, the sound reaches a good level at max volume without sounding too muddied.

You get both USB Type-A and Type-C ports, but I’d much rather have one of the former and two of the latter. Still, having both types does save you from having to deal with a dongle. For such a modern laptop, I was surprised to find it uses an old-school barrel charger. I’d much prefer USB-C charging and have a USB-C port on either side so I’m not forced to always charge from the right side. The USB-C port does not support Thunderbolt 4 because of the AMD CPU, but it does do power delivery and DisplayPort. There’s also an HDMI port to round out your video-out options. The two biggest omissions from the port selection are an ethernet port and SD card slot.

Based on AMD’s eight-core Ryzen 7 5800U, the Aero 13 excelled in testing, turning in commendable results on both application and multimedia benchmarks. Its 3D graphics performance was predictably lackluster, however, and its battery life may leave you wanting.

We compared the Aero 13 against the Acer Swift X, another thin-and-light laptop we recently reviewed that features the Ryzen 7 5800U. You’ll see a trio of 13-inch laptops based on the Intel Core i7-1165G7 CPU—the Dell XPS 13 2-in-1, the Lenovo ThinkPad X1 Nano, and the Razer Book 13. Rounding out the charts is HP’s much pricier and business-focused Elite Dragonfly Max that features the Core i7-1185G7 CPU. All six laptops feature 16GB of RAM, and all but the Swift X feature integrated graphics. The Swift X trades out AMD’s integrated Radeon graphics in favor of a GeForce RTX 3050 Ti GPU.

Our first benchmark is PCMark 10, which measures performance on everyday computing work including office productivity tasks, web browsing, and video chats. The Intel-based systems failed to hit the 5,000 mark while the AMD-based Aero 13 and Swift X topped the 6,000 threshold. Advantage: AMD. Specifically, the Ryzen 7 5800U and its eight cores and 16 processing threads. The competing Core i7 chips have only four cores and eight threads.

Next up is Cinebench, a sort of CPU sprint that stresses the CPU rather than the GPU and makes use of all processing cores. The pair of AMD-based systems put their added processing cores and threads to good use and easily outpaced their Intel competition on the multithreaded test.

The two AMD laptops also topped the chart for single-threaded performance on Cinebench, with the Aero 13 taking the top spot.

We use the HandBrake utility to convert a 30GB movie to Android table format, an intensive task that taxes the CPU and all of its cores. With double the cores, the Aero 13 and Swift X dominated, completing the test in a fraction of the time it took the Intel machines. The Aero 13’s multimedia performance results indicate that it’s a better pick for creative work than its Intel competition. And I should note that the system ran quietly and stayed cool during intensive graphics work.

The Aero 13 took another L on our battery life test. It ran for less than nine hours on the test while competing laptops ran for 12 hours or more. The Aero 13 might get you through an entire workday on a single charge, but you won’t want to leave your charger at home. Part of the tradeoff for such a compact and light system is a small battery. The Aero uses a 3-cell, 43 work-hour battery where most laptops feature at least a 4-cell unit.

Thin and light and mighty

Beyond being incredibly light and eminently portable, the HP Pavilion Aero 13 scores points for still providing a roomy display and comfortable keyboard in such a compact package. A 13.3-inch laptop can feel cramped with a 16:9 aspect ratio but when stretched vertically to 16:10, you get more room to work. And the Aero 13 is certainly ready to work. The Ryzen 7 5800U helped the laptop deliver outstanding application and multimedia performance that’s a step or two ahead of its Intel-based competition. You won’t find more power in a lighter laptop for the price.

It’s so light in fact that I’d be willing to tote around another couple of ounces for a 4-cell battery and a longer running time. And let’s be honest: keyboard backlighting should come standard.