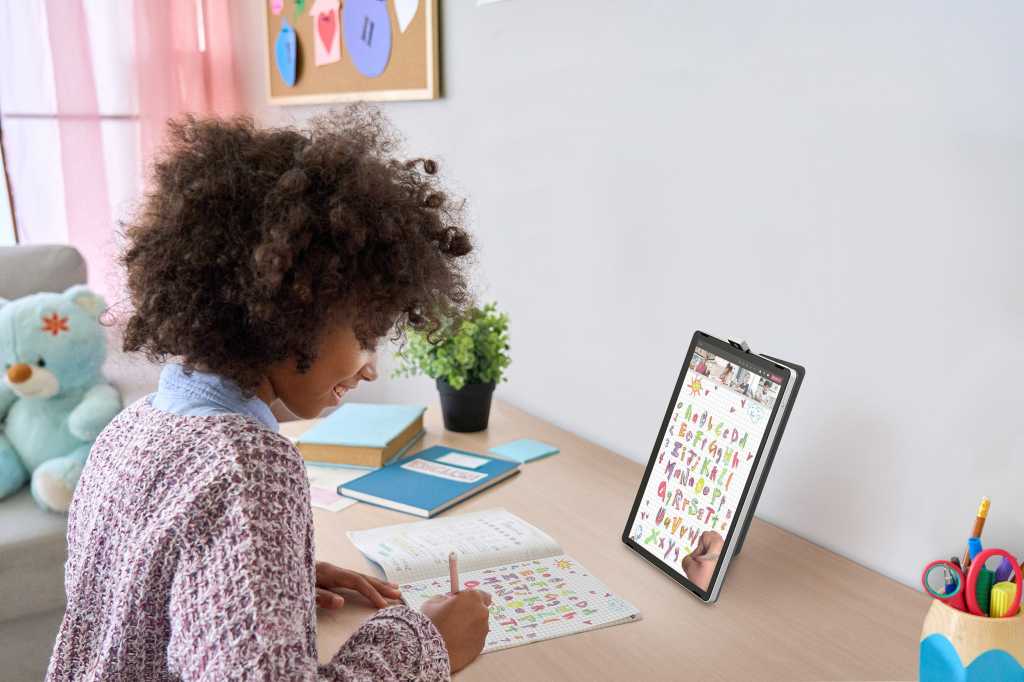 HP will release three new Windows 11 devices to kick off the launch of Microsoft’s next-gen operating system, including a fresh Spectre with a juicy OLED display and a webcam designed to blow your socks off, the first laptop with a Qualcomm Snapdragon 7c Gen 2 chip, and an 11-inch tablet with a nifty swiveling camera that lets you show off your homework.

The HP 11 inch Tablet—yes, that’s its name—is among several new laptops, all-in-ones, and monitors that HP dropped on the world today, but it’s really the 11 inch Tablet that catches your eye thanks to that unique camera.

The concept revolves around the ability to do a video call while letting a teacher or co-worker see what you’re sketching in real time. Yes, you can sketch on the screen as well using the tablet’s pen support, but many artists and students prefer analog mediums such as pen, paint, or crayon.

If the HP 11 inch Tablet is a little too radical, but you still want something different, the company is also introducing the not-so-radically-named HP 14 inch Laptop. The HP 14 inch Laptop will come with Widows 11 Home running an 8-core Qualcomm Snapdragon 7c Gen 2 SoC—an Arm chip—with 8GB of LPDDR4x/4266 memory and 128GB of eMMC storage. The laptop, which HP claims is the first to use this Snapdragon chip, will also offer 4G LTE support.

The name gives away the screen size: 14-inches, with a resolution of 1920×1080 and a maximum brightness of 250 nits. The HP 14 inch Laptop will weigh 2.6 pounds (without charger) and offers a 32 watt hour battery that good for up to 11.5 hours of local video playback, or 8.5 hours of of wireless video streaming.

The HP 14 inch Laptop is expected to be available in October from Walmart.com. Pricing will be announced closer to its availability, HP officials said.

If you want something with a little more grunt than a Pentium or a Snapdragon, HP’s last new reveal might be of more interest: the Spectre x360 16 2-in-1. As its name implies, the Spectre x360 16 is built around a 16-inch, 16:10 screen. Screen options will include everything from an IPS low-blue light 3072×1920 display—that isn’t a typo—all the way up to an 4K+ OLED screen. As a convertible, all versions should include touch support.

Processor-wise, the Spectre x360 16 is powered by a quad-core 11th-gen Intel Core i7-11390H. And no, that’s not one of the 6- or 8-core Tiger Lake H chips that released this summer. It’s actually more of tuned up 4-core version that can reach 5GHz boost clocks and previously would have been called Tiger Lake H35. Think of it as a chip made to push high clock speeds in thin and light laptops.

The Spectre x360 16 isn’t quite as light as you might expect though with a curb weight of 4.4 pounds. Some of the weight, no doubt, comes from the Gorilla Glass layer over the touch screen. Most 2-in-1 hinges can also add a little more weight as they are beefed up.

Graphics include Intel’s Iris Xe, with an optional GeForce RTX 3050 discrete GPU. HP says you can get up to 17 hours of battery life from the 83 watt hour battery.

The Spectre x360 16’s last trick is more unexpected: HP said the camera will be the first use of 5 megapixel in a laptop. That works out to a resolution of 2592 x 1944, which is a huge step up from most laptop’s 1280 x 720 resolution webcams. Besides supporting Microsoft’s Windows Hello biometric login, the camera’s high resolution allows the laptop to zoom in on your face using AI and follow you as you stand in front of the laptop. It can also wake up the laptop when you walk in view of the camera, track your attention, and let you know if someone is trying to look over your shoulder as you work.