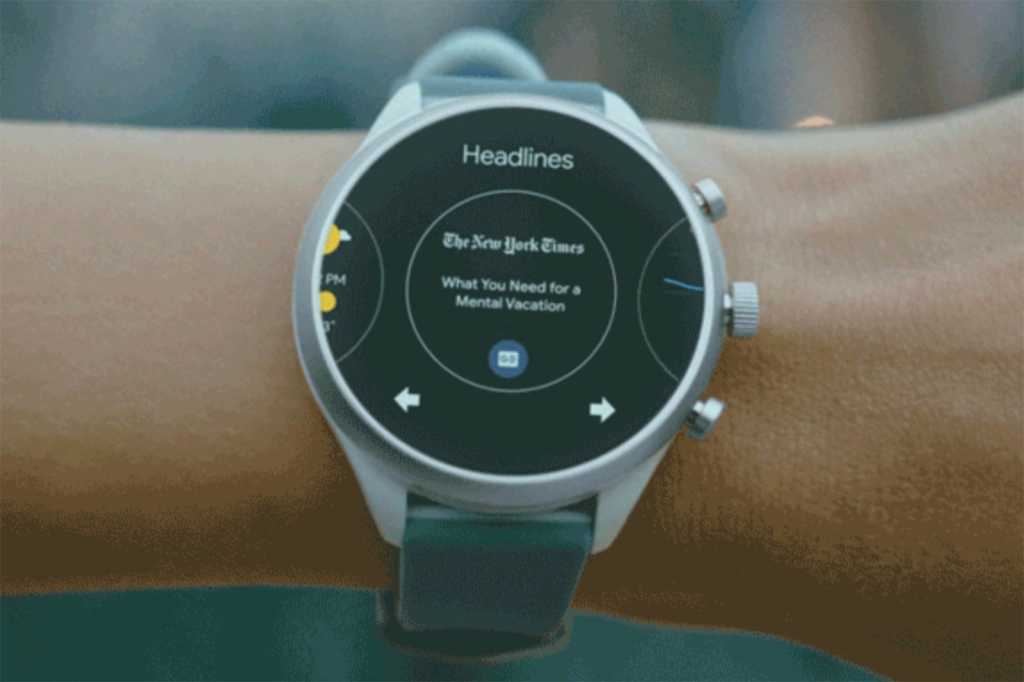 Short of a complete overhaul, Google is giving Wear OS a bit of a makeover with a new navigation feature designed to limit the time you spend with it. Called Tiles, they’re similar to the original Apple Watch’s defunct Glances: bite-sized bits of information that give you information without needing to launch an app or touch the screen.

Tiles build on the Assistant feed and Google Fit shortcuts with six new screens: Goals, Next event, Forecast, Heart rate, Headlines, and Timer. When you swipe left on the watch face, you’ll be able to cycle through them to get quick updates throughout your day. For example, the Forecast Tile offers the current temperature and conditions as well as a few days of temperatures, while the Headlines Tile shows a top Google News Story.

Tiles can be deleted and rearranged similar to how you change a watch face: either in the Wear OS app or by tapping and holding a Tile on your watch and dragging it to a new location. They’re not designed to be interactive, but you can tap on them to launch the associated app.

Google rebranded Android Wear as Wear OS last year, and has slowly been adding features such as dark mode and deeper Assistant integration. Google also said it would be working with existing partners rather than developing its own wearable device, but we’ve yet to see much in the way of new hardware.

New Tiles will be added “over time to help you stay connected to what matters most.” Based on the launch video, Breathe, Music, and Google Pay could be on the way, but the possibilities are fairly endless, especially if Google opens up Tiles to third-party app developers.

Google says the new Tiles will be rolling out to Wear OS watches over the next month and will be on display at Google I/O beginning May 7.

Why this matters: With few killer apps and even fewer flagship watches, Wear OS is in desperate need of a leader. Tiles is a good start, but what Wear OS really needs is someone to make a watch that people want to wear and be seen with. Google clearly wants to develop Wear OS into a strong competitor to the Apple Watch, but without new hardware that’s smaller, faster, and more fashionable, Tiles aren’t going to move the needle too much. But here’s hoping that the Tiles demo at I/O is running on something new, and not the same old LG, Fossil, and Huawei devices.