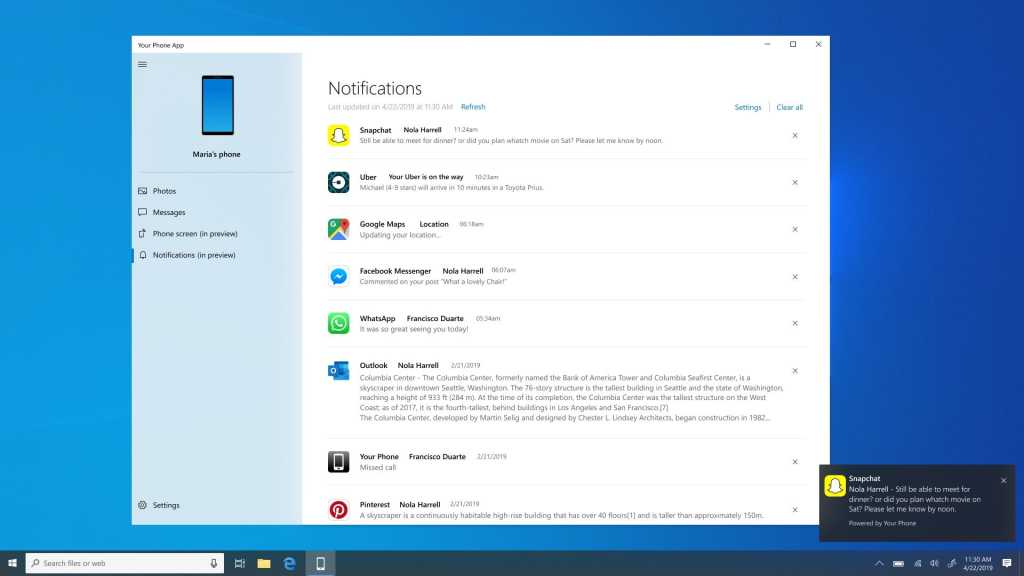 Even as Microsoft tweaks its final bits of code in preparation for the Windows 10 May 2019 Update, its development teams are moving on to the next major feature update of Windows, known as 20H1.

Yes, “20H1”—if you aren’t familiar with the nuances of Microsoft’s Windows development roadmap, you may not be aware that Microsoft’s already moved ahead to the next major release expected in the first half of 2020. We’re not sure whether that means the “19H2” update expected later this year will have a sparser list of new goodies. Based on what we’ve seen in the Windows 10 Insider Preview Build 18885 that was released today, however, new features in 20H1 will include dictation in multiple languages, and notifications integration with the Your Phone app.

Two changes have been made to the Your Phone app, the app that ties Windows to either an iPhone or Android phone. Given the more open nature of the Android ecosystem, Microsoft is focusing its efforts on that platform. The first major change to Your Phone is making available the existing screen mirroring or phone screen feature to more Android models: the OnePlus 6, and OnePlus 6T, as well as the Samsung Galaxy S10e, S10, S10+, Note 8, and Note 9.

Screen mirroring remains a relatively niche application for now, however. For one thing, the entire Your Phone premise is built around the convenience that you don’t have to actually remove your phone from your pocket or desk. Screen mirroring reproduces your phone’s screen within the Windows app, so you can respond to a Snapchat message, for example, right from your PC. But you’ll also need one of the supported phones and a PC with a Bluetooth radio that supports the low-energy peripheral role. The Surface Go is the only member of Microsoft’s Surface lineup that currently includes it.

Unfortunately, that limits the appeal of the new Your Phone addition: notification support, which has been added within Build 18885. You can control which apps can send you notifications. Dismiss an app, and it vanishes on your phone, too.

Microsoft made two other tweaks. First, it added more support for dictation, and second, it solved a bug which had prevented users from upgrading to the May 2019 Update.

Microsoft also pledged to fix a bug that prevented PCs from upgrading to the May 2019 Update when an external USB device was plugged into the system. Build 18885 contains that fix. In addition, a rollup patch should be arriving soon for non-Insider PCs to allow that upgrade to happen.

What this means for you: Microsoft appears to be continuing the trend of taking existing Windows 10 features and improving them. That has made some recent Windows 10 updates, including the upcoming May 2019 Update, rather unexciting. Build 18885 suggests we’ll have some interesting things to look forward to in a year’s time.