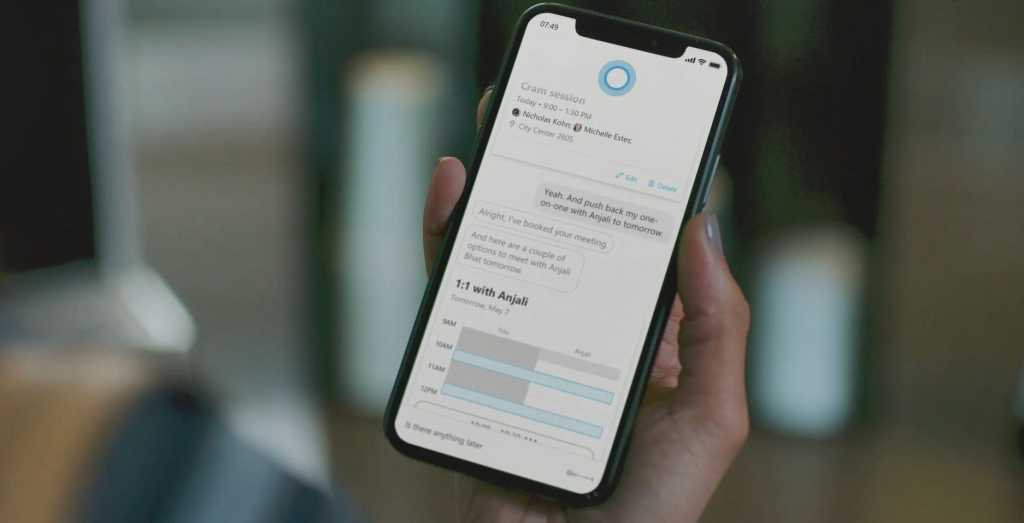 Microsoft’s digital assistant, Cortana, began as a peppy AI sidekick within Windows 10, experimented a bit with smart speakers, then went on semi-hiatus as she worked out some things. Now she’s reinvented herself once again as a no-nonsense digital assistant, in a Microsoft concept video at Microsoft Build.

The video Microsoft showed off, in advance of its Microsoft Build developer conference, shows a responsive Cortana responding to an executive, answering questions, rearranging her schedule, booking conference rooms, and checking on the weather. The assistant clearly understands the context of various questions, and can integrate various data sources.

“This technology is going to be the engine powering all of our conversational experiences going forward,” Frank Shaw, the corporate vice president for communications, said in advance of Build. “It will be integrated into Cortana and made available to developers in the Microsoft Bot Framework and the Azure Bot Services.”

For years, Cortana was emblematic of Microsoft’s AI ambitions, taking pride of place within Windows 10 and Windows 10 Mobile. Over time, however, Microsoft’s emphasis appeared to shift. Last year, Cortana’s then-chief Javier Soltero talked about how Cortana’s intelligence would be distributed among various apps. “The guiding light for us is the assistant concept, and the idea that you want to help people get more out of their time, and whether actively or proactively make the things that you do every day easier or better or more effective,” Soltero said at the time.

Soltero has since left Microsoft, however, and we’ve seen some change. in the Windows 10 May 2019 Update, Cortana’s been separated from the Windows search box. Last week, Microsoft offered a look into the future of Cognitive Services, the AI brains that it was applying to third-party bots.

Based on Microsoft’s video, however, Cortana’s core mission appears to have remained true to Soltero’s vision. Cortana is apparently embedded within an Android phone (presumably within the Microsoft Launcher, which serves as a Microsoft “homepage” of sorts for Microsoft services like Bing) and answers the executive’s spoken questions, with one response leading into the next. The entire exchange is voice-driven.

What Microsoft’s video shows looks quite a bit like the Google Assistant, both in the thread of question and answers as well as the conversational interface. Early on, the executive asks Cortana to book a meeting with a coworker and “his manager,” proving that Cortana understands the corporate hierarchy.

What Microsoft doesn’t show is anything but Cortana, even as the conversation progresses. As the executive asks for numerous adjustments to her calendar, Cortana displays a pictorial representation of the calendar, but never apparently opens Outlook. That calendar coordination required the executive’s version of Cortana to call the Cortana agents owned by her co-workers.

It’s an important progression for Microsoft, both reminding users that Cortana exists, and showing off how Microsoft can use AI in a practical way. But it’s still lacking in some areas. For example, while Google showed how its Assistant can actually book a restaurant, Microsoft’s demo showed only that Cortana understood that a location had outdoor seating. In that regard, Cortana still has some room to catch up.