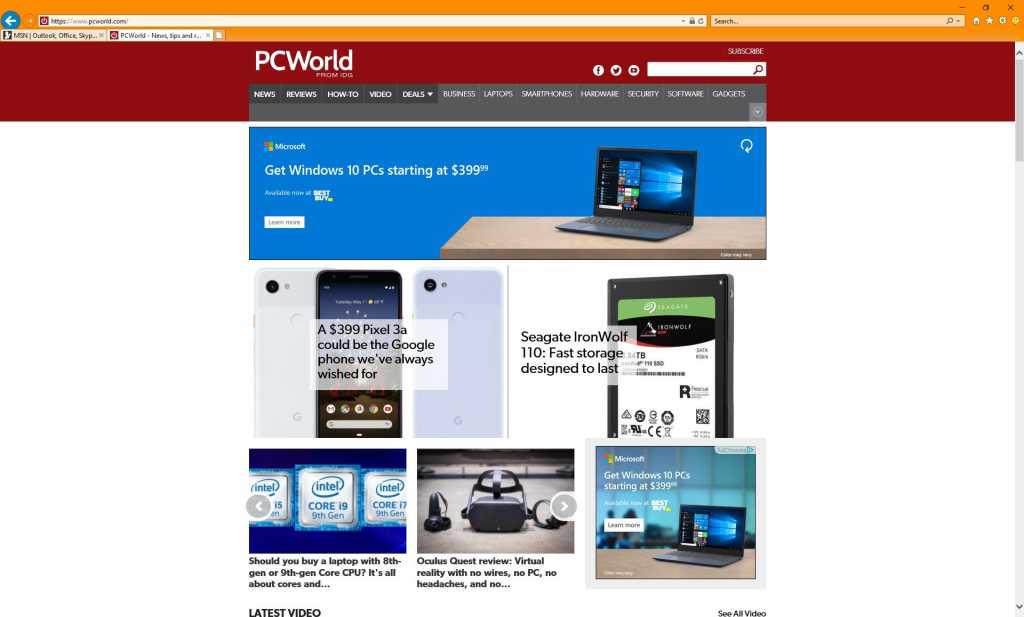 Microsoft also said that future versions of Microsoft Edge will include something called “Collections,” designed to help users organize content more efficiently, as well as better privacy controls. These features and more will roll out “near the broader launch of the next version of Microsoft Edge,” Microsoft said at its Microsoft Build developer confernece, presumably the rebuilt Edge on Chromium browser Microsoft has begun testing out.

For years, Internet Explorer 11 has hidden deep within Windows 10. It’s a perfectly usable browser that requires typing in “Internet Explorer” within the Windows search box, or merely unearthing it from the ‘Windows Accessories” folder of legacy apps within the Start menu.

The reason that Windows hides Internet Explorer is simple: Microsoft would much rather you use the more modern, safer Edge, but some businesses have built legacy line-of-business apps that demand Internet Explorer. Putting IE in a tab means that users will be led toward using Edge for the majority of their browsing, only using IE as a tab when they need to. Microsoft is publicly migrating Edge onto the Chromium open-source engine that Google’s own Chrome taps into, giving Chrome and Edge more common ground. (Want to get ready for the new browser? You can help test it out at the Microsoft Edge Insider site.)

There’s a more Machiavellian aspect to Microsoft’s decision, too. Believe it or not, Internet Explorer (7.7 percent) actually is more popular than Edge (4.49 percent), so combining the two browsers could top Firefox (9.63 percent) and propel Edge into becoming the second-ranked PC browser.

Microsoft is also promising improved privacy controls. “The next version of Microsoft Edge also will offer additional privacy controls that allow customers to choose from three levels of privacy: Unrestricted, Balanced and Strict,” Microsoft says. “Depending on the option you pick, Microsoft Edge will adjust how third parties can track you across the web, giving customers more choice and transparency for a more personalized experience.”

Microsoft also is promising a Collections feature within Edge that will “help customers collect, organize, share and export content more efficiently, and do it with Office integration.” Microsoft didn’t say too much about Collections in advance of the show, but it appears to be a “pane” within Edge that will serve as a digital repository for websites, notes, and other digital information surrounding a particular topic, that can be later exported.

It sounds potentially fascinating, but we don’t know much more about it. Hopefully we’ll hear more at Microsoft Build this week.

This story was updated at 5:31 PM with additional images and details.