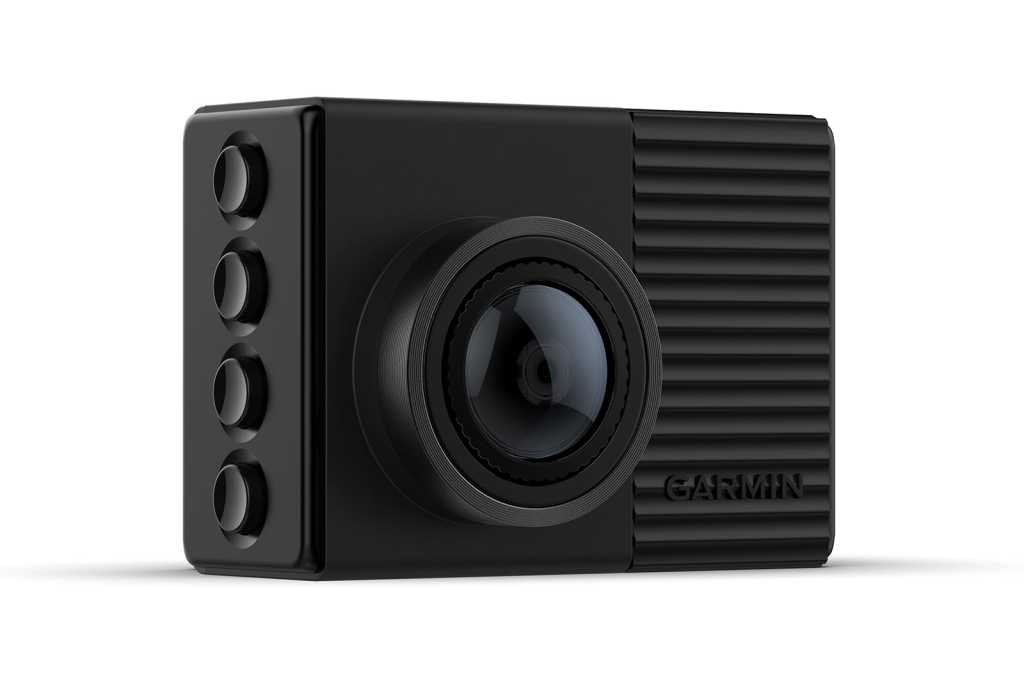 We love the Dash Cam 66W’s design and features, but the night video is not detailed enough for surveillance. Also, the unit ran quite hot in our tests here in mild San Francisco.

When it come to video stabilization, Garmin’s new Dash Cam 66W is a vast improvement over last year’s Garmin Dash Cam 65W, which had major difficulties on bumpy roads. This year the video is as smooth as a baby’s behind, even on San Francisco’s perpetually under-construction streets. In fact, it’s as stable as anything I’ve seen.

Beyond that, the diminutive-sized Dash Cam 66W sports mild upgrades, which makes it a very, very good dash cam. However, there’s still room for improvement.

The first thing you notice about the Dash Cam 66W is that, like its predecessors and siblings, it’s quite small for a dash cam—approximately 2.2 x 1.6 x 1.4 inches. Alas, one of my favorite things about the Dash Cam 65W, the dark pewter highlight ring on the lens neck, is gone, replaced with plain black. Stealthier perhaps, but not as classy-looking. That’s not the only cost-cutting measure for this $250 camera: Gone too is the bundled 8GB SD card, which is a bit of a bummer if you’re buying at a travel stop or other location that might be short on accessories.

The back of the Dash Cam 66W is devoted almost entirely to a nice 2-inch display, while configuration and control are done with four buttons on the right side of the unit. The only other major features are the micro USB port on the left side, and the SD card slot on the bottom. The USB port is oriented so that the power cable (auxiliary/cigarette lighter to micro-USB) points up to the ceiling. Alas, the bottom air vent lacks a partner on top, though there are small gaps around the mount that might allow some hot air to escape.

The Dash Cam 66W retains the unique mounting system of last year’s models. A small, thin octagonal plate adheres to the windshield and marries magnetically to the support arm attached to the camera via a ball joint. It’s my favorite mount by far as it takes up minimal space, and makes for easy positioning and removal of the camera. As I park a convertible on city streets, taking my dash cam with me removes one reason for someone to slash my top.

The 66W features Bluetooth/Wi-Fi connectivity, so you can offload your video captures to your phone using Garmin’s Drive app. The phone app also can be used to configure basic settings and align the camera.

Using the Dash Cam 66W is easy, and sometimes kind of fun. Among the many bells and whistles, probably the most useful is voice control. It allows you to tell the camera to save a video or picture, stop recording audio, or start recording a Travelapse video. The latter, as you might guess, is a time-lapse version of events. GPS is on board and watermarks the video (you can turn this off), but sadly, it’s not embedded, which would be useful for mapping the locations in the Travelapse or in GPS tracking applications. You can locate manually, but that’s no fun.

Bad driver tech includes warnings for lane departure, collision, and you’re-idling-aimlessly-at-a green-light, as well as a red light camera alert. The latter is dependent upon the data Garmin has on the area, which, given its vast experience with navigation units, should be quite comprehensive. The Dash Cam 66W’s red light camera information proved largely accurate in my excursions around San Francisco.

While some dash cams feature a super-capacitor to keep the device alive briefly after losing power, the Dash Cam 66W does a bit better. Its battery backup keeps the camera running for 15 seconds by default, and it will power the camera in parking mode for quite a bit longer.

Hallelujah and pass the image stabilization sauce: The Dash Cam 66W’s video doesn’t jump about like a rabbit on hot asphalt as the Dash Cam 65W’s did. Actually, last year’s video was jittery only over rough roads, but that describes a large part of San Francisco.

The 66W’s video is clear and detailed at 1440p and nearly as good at 1080p. But as you’ll notice below, the 180-degree field of view, which captures more action to the sides is more useful for legal purposes than for documenting your travels. That’s because of the fish-eye distortion the wide-angle lens induces. If that’s a concern to you, look at the Garmin Dash Cam 56 (,available on Amazon), which is basically the same camera with a narrower 140-degree field of view.

Night captures seem to be tuned to capture less light and more details in the event of an accident. Capturing too much light, the video is more prone to headlight flare, which can obscure important details such as the license plate of the car that just ran into you. That makes the Dash Cam 66W good for accidents, but not very good at surveillance of the car when it’s parked at night. That’s where you want to let in more light to capture details in the surroundings. See the image below.

Even tinkering with the snapshot’s brightness and clarity, as shown below, didn’t reveal as much detail as I’d hoped.

One thing about the Dash Cam 66W, with its -4 to +131 degrees Fahrenheit rating, is that it runs almost hot, even when capturing at only 1080p at 30 frames per second (1080p at 60 fps is also supported). The first time I popped it off the windshield into my hand, I actually had the hot-potato reaction—tossing it quickly into the air. It wasn’t painful heat, just hot enough to startle me. And that’s in about 60-degree weather here in San Francisco.

Garmin stands by the design. The company says the camera’s so small, there’s simply less surface to radiate heat, hence the feel.

Battery runtime, on the other hand, was great. After nearly 30 minutes of taking video in parking mode, the camera was still chirping at me when I put in the box to send it back.

Last year, I gave the Dash Cam 65W a qualified recommendation for those who wanted a wide field of vision and sleek design, and could tolerate its jouncy reactions to uneven pavement. This year, with the Dash Cam 66W, it’s smooth sailing on rough roads so it’s no longer qualified. The low-light video quality falls short for parking surveillance, and you should give the camera a moment to cool down before you remove it from the car. Still, it’s a very nice design.