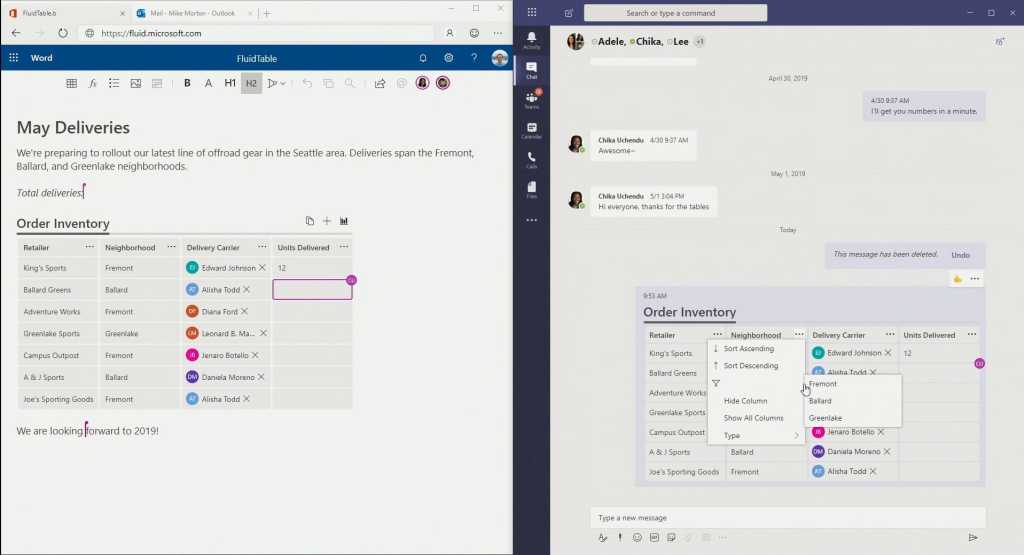 Microsoft’s Fluid Framework may be the future of Office—a future where the walls between applications melt away, and collaboration is routine. If this sounds familiar, that’s because in 2014, Microsoft experimented with a web-based collaborative app called Sway that combined web publishing, Word, and presentation software into an engaging mess of text and images.

We should find out more about Fluid Framework during Microsoft chief executive Satya Nadella’s keynote kicking off the company’s Build developer conference on Monday morning. From a product standpoint, Microsoft expects to deliver the “first Microsoft 365 experiences powered by Fluid” later this year, alongside a software development kit for third-party developers.

In a briefing before Build, Microsoft described Fluid Framework as a way for Microsoft and developers to build “flexible, web-based distributed applications.” What Microsoft appears to be doing is trying to break down the concept of a document as a discrete object, and enable a “free-flowing canvas” where multiple users can collaborate on a document quickly on the web, with artificial intelligence or agents assisting behind the scenes. These agents, according to Microsoft’s vice-president of communications Frank Shaw, would perform tasks like fetching content, providing photo suggestions, translating data, and even co-authoring in places.

“On this canvas, we have a different way of looking at these artifacts,” Shaw said. “Is this a document or a presentation or a spreadsheet?  The answer is yes, and you don’t have to worry about that.  Everything is just adapting in the background.”

At Build, Mike Morton, a group program manager for the Office group, explained Fluid Framework in a bit more detail. Essentially, a Fluid document will be Web-based, with objects able to be worked upon in real time. For example, you’ll be able to type into a document, and Office will automatically translate it for others who are working on the same document.

According to Shaw, one example of a Fluid Framework application would be in the global collaboration of a corporate HR manual, written in multiple languages. “The Fluid Framework could allow for real-time translation across those teams as they’re co-authoring in the manual,” Shaw said.  “A procurement management could create a document that marries words with calculations in the same document, with those calculations being updated by someone else on the team.”

Here’s Fluid Framework working in a different way, with one worker editing a chart in Word, and another in Teams:

Whether Fluid Framework ends up looking like Sway is hard to say. Sway was noteworthy for living wholly on the web at Sway.com, and for exerting a fair amount of control over the design of the document.

For example, you simply assigned an image a particular “weight,” and Sway would decide where to place it according to a generalized layout. If the author didn’t like the result, they could click a button to “remix” or reorganize the final result into another layout. If Fluid Framework is based upon Sway, it’s likely to be much more sophisticated.

This story was updated at 5:12 PM with additional detail and illustrations.