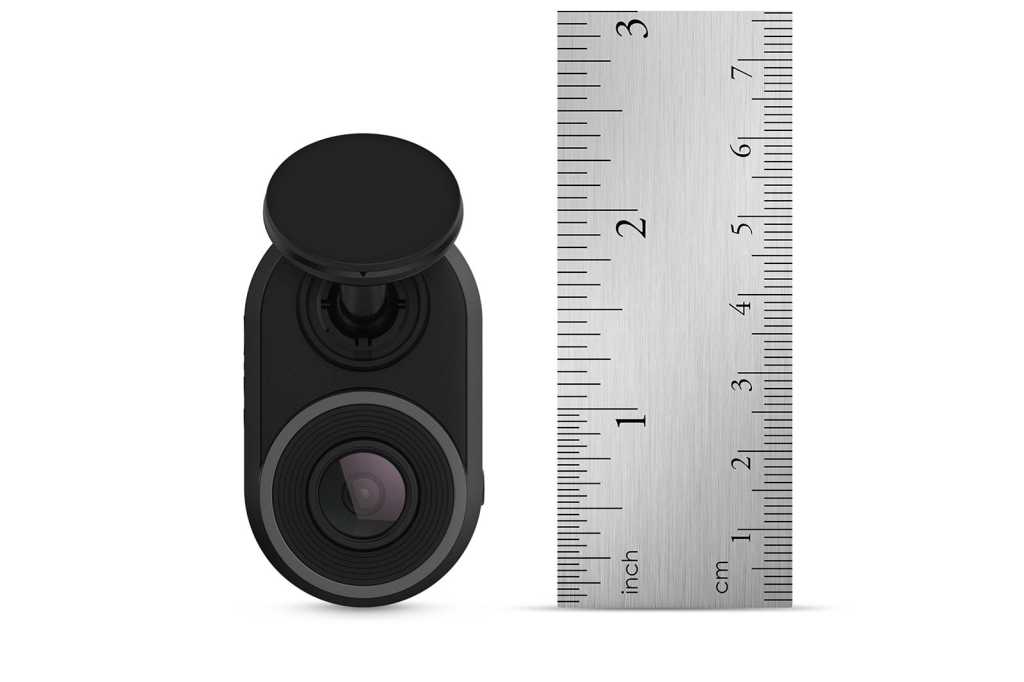 We love this dash cam’s diminutive profile, very nice video, and phone connectivity, but we miss GPS, would like more than one second of run time from the super capacitor, and wish it were better ventilated to release heat. That’s a lot of caveats for a camera that we actually like.

The Dash Cam Mini is a very clever and low-profile (to thieves) design, but there are caveats.

As the Dash Cam Mini isn’t large enough to fit a display (a useful-sized one anyway), it relies on your phone for such. Therefore, the first thing you need to do is download the Garmin Drive app. The app pairs your phone with the camera via Bluetooth, then engages its Wi-Fi hotspot for further communications. The app lets you view real-time or captured video, as well as change the video quality, units (metric, etc.), enable the date/time watermark, format the SD card, and align the camera.

It couldn’t have been easy to fit Wi-Fi, Bluetooth, and an SD card slot, as well as a 140-degree field of view, 30-fps, 1080p camera in the Dash Cam Mini. The on-camera controls are understandably limited: a tiny microphone on/off button, and a file-save button on the back of the unit.

The Dash Cam Mini lacks GPS, which renders it slightly less than optimal for legal use and documenting travels. Granted, just the video of the accident has been sufficient in all the legal cases I’m aware of. But no GPS, in combination with a super-capacitor that provides a mere second or two of run time off the 12-volt, means it’s not the dash cam I’d recommend for bullet-proof legal protection.

The Dash Cam Mini is mounted using a metal post and plastic ball joint arrangement similar to what Garmin first marketed last year. However, in the Mini’s case, the metal post is permanently attached to the window. To remove the camera, you must pop it off the ball joint. We don’t know how the ball joint will wear over time if you’re removing the camera every time you park your car, but that’s something to consider.

The auxiliary power adapter has two USB ports. The USB cable Garmin supplies is data-capable (some are power-only) and can be used to connect the Dash Cam Mini to your computer for offloading photos. Note that when attached as a USB mass data device, the camera stops functioning.

Hallelujah! Garmin has fixed the stabilization issue that plagued last year’s cameras. In fact, this new generation now produces some of the most stable video in the business. The fisheye effect from the 140-degree lens is minimal, and detail is quite good, as is color. Night video from the Sony IMX323 sensor was also quite good. My main complaints are that the day video appears just a tad overexposed in bright sunlight, and there’s a little more headlight flare than I’d like. It’s still more than adequate for most jobs.

As you can see in the night shot below, the Dash Cam Mini shows a lot of detail in the surrounding area, though it has a slight orangeish cast that’s not the reality of the location shown. Note that my windshield wasn’t as clean as it could’ve been that night, which created most of the defects, including flare in the house lights.

Overall, I had no real complaints concerning the Mini’s video. However, the unit does run almost hot to the touch—and that’s here in mostly 65-degree San Francisco. Given the camera’s -4 to +160 degrees Fahrenheit operating specs, that’s not as much of a concern as the heat produced by its 66W sibling.

Given the Dash Cam Mini’s minuscule proportions, it’s not surprising that Garmin opted for a super-capacitor over a battery. However, run time is very short–two seconds max. That’s enough time to save a file, but won’t capture any post-impact action.

If small’s your thing…

If you’re looking for a dash cam that’s truly unobtrusive and takes good video, then the Dash Cam Mini is a worthy, if somewhat pricey option. My main caveats are the lack of GPS and the short run time of the super capacitor, but I love the size and design.

This article was edited 3/16/2020 to replace Sony STARVIS with Sony IMX323 as the sensor type.