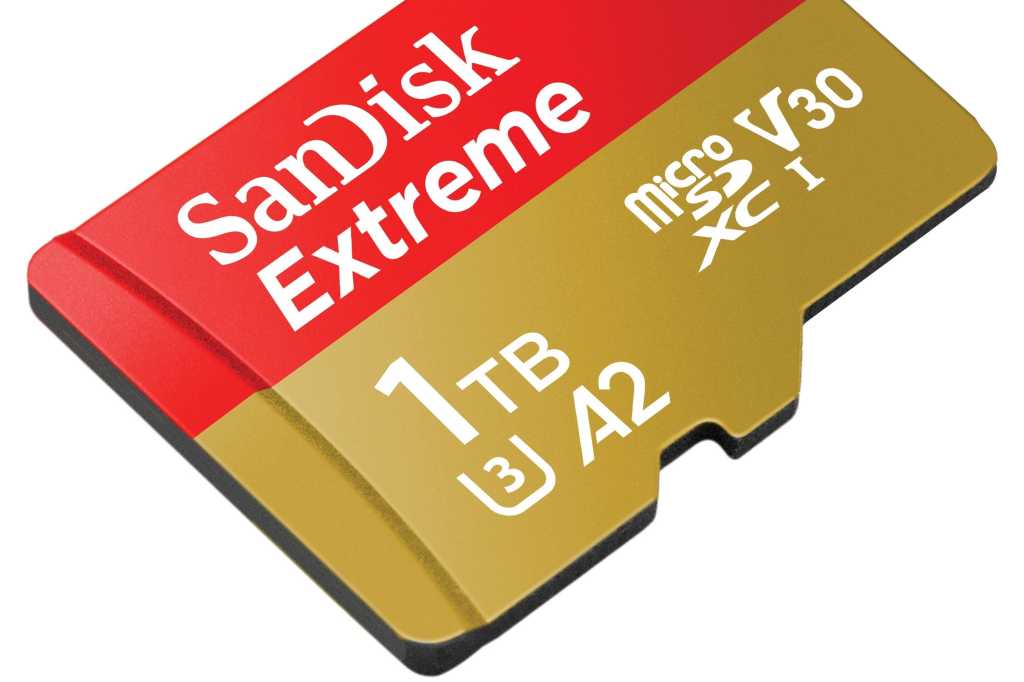 SanDisk
At a Glance

SanDisk’s 1TB Extreme microSDXC UHS-I card is impressively fast and impressively large. However, price-sensitive consumers can save by going with a smaller card.

SanDisk made a bold claim when it introduced the 1TB Extreme microSDXC UHS-I card in February at Mobile World Congress. The company touted it as the world’s largest and fastest microSD card. After benchmarking the new 1TB SanDisk Extreme, we can attest to the card’s speedy performance.

The card itself is the familiar microSD form factor, about the size of the fingernail on your pinkie. Every card has its standards tailored to certain storage needs (read our guide on how to choose an SD card for more details). The 1TB SanDisk Extreme carries labels for A2, U3 and V30 ratings:

The other important specs are the explicit 160MBps read and 90MBps write speeds SanDisk said the card will hit. These speeds matter when taking still pictures, or dumping a ton of videos from your PC to the card.

These are also the specs that likely make the card faster than the only other 1TB microSD card out there: Micron’s c200. While the Micron c200 carries the same V30, U3 and A2 ratings of the SanDisk 1TB Extreme, its explicit read and write speeds are 100MBps and 95MBps, respectively. While we haven’t tested the c200, we’d guess that difference in read speed is enough to give SanDisk the blessing of its lawyers to say that it’s the “fastest.”

To test that claim, we fired up the SanDisk 1TB Extreme in two platforms: an HP Spectre 13 x360 convertible laptop with a 7th-gen Intel Core CPU, and an LG G8 ThinQ using Qualcomm’s SnapDragon 855 SOC. For context, we retested two other beefy microSD cards: A 400GB SanDisk Ultra card, and a 256GB SanDisk Extreme card.

For our read and write tests on the HP Spectre 13 x360, we used a SanDisk MobileMate USB 3.0 reader that supports UHS-I transfer rates. With the LG G8, we used each card in the phone’s microSD slot. Android’s optional Adoptable Storage mode was not used, as LG doesn’t support it in the G8.

Looking at the sequential read performance of the 1TB Extreme card, we’re pretty much pushing the limit of the UHS-I bus. Read performance is essentially the same as for the SanDisk 256GB Extreme card. As the key metric for the claim of “World’s fastest UHS-I microSD card,” it looks pretty promising if you believe CrystalDiskMark.

Write speeds matter too, because the longer it takes to copy your files to the card, the the longer it’ll take to hit the road. SanDisk rates the 1TB Extreme at 90MBps. CrystalDiskMark actually puts it above that at 107MBps. That’s a pretty decent write speed.

You should know that an empty memory card or SSD is generally faster than one that is near capacity. It’s not because it’s filling up like a hard drive, with its physical limitations. Rather it’s because much of the speed you get from NAND-based storage comes from using empty space on the drive to improve performance. As the card nears capacity, some of that caching capability goes away. The larger the card or SSD, the longer it takes to hit that limit.

If you don’t believe in synthetic benchmarks, we understand. To see how the card performs in “real file copies,” we write a 6GB 4K video file multiple times to the card while it’s mounted in the HP Spectre 13 x360. For the most part, it nearly mirrored the results from CrystalDiskMark. Below you can see the time it took in seconds averaged out. Both SanDisk Extreme cards were blazing, while the 400GB SanDisk Ultra card came in last.

Besides serving as bulk storage for videos you watch on the road, the other primary use of microSD cards today is in Android phones. We won’t rehash all of the problems with external storage on the Android platform; we’ll simply test for the one metric people think they want: random read and write speed performance in applications.

Memory card makers, along with Google, have recently begun pushing the A1 and A2 spec (covered in detail in our SD card buying guide also mentioned above). Technically faster random read and write performance measured in IOPS means better performance for applications on Android. The problem? Most phones don’t seem capable of supporting it yet.

We’ve run this test on the new LG G8 and an older LG phone, as well as two other Snapdragon 845-based phones. We’re always left wondering what the point is.

Still, here you see the performance of the A2-rated 1TB SanDisk Extreme card in the LG G8 using AndroBench to measure the Random Read in IOPS. The results are barely worth writing about.

The write performance of the 1TB Extreme card picks up, but it’s still pretty disappointing when you consider that A2-rated cards can hit 2000 IOPS for minimum random writes.

Again: We probably can’t blame the card, as we’ve been told the SnapDragon 845 (and probably the 855) chip doesn’t even support the A2 spec anyway. It’s also possible the actual memory card readers in phones are to blame. In short, if you think A2 will get you better application performance on your Android phone, it won’t be as fast as using internal memory.

Is the 1TB SanDisk Extreme worth it?

As our benchmarks have shown, the 1TB SanDisk Extreme is stupidly big and stupidly fast. The big question is whether all this brawn is worth it. We used the MSRP of the 1TB card (we couldn’t find it on sale yet) and compared it to the street price of the two other cards in this review. On a per-gigabyte basis, the SanDisk 400GB Ultra card is a lot more affordable than the SanDisk 1TB Extreme card. Of course, the Extreme is much, much faster.

One consideration is whether you truly need top-notch performance. While the 1TB Extreme leaves the 400GB Ultra in the dust, if you have the patience to just wait, and wait, and wait (file copy complete), you save by going cheap.

Here’s the other consideration: You want a metric ton of files in your laptop, tablet or phone at all times, and the idea of swapping out the memory card (and maybe losing it in the process) gives you the cold sweats. We have to say, the idea of carrying 1TB in a memory card smaller than our fingernail may make that $450 price tag seem worth it.