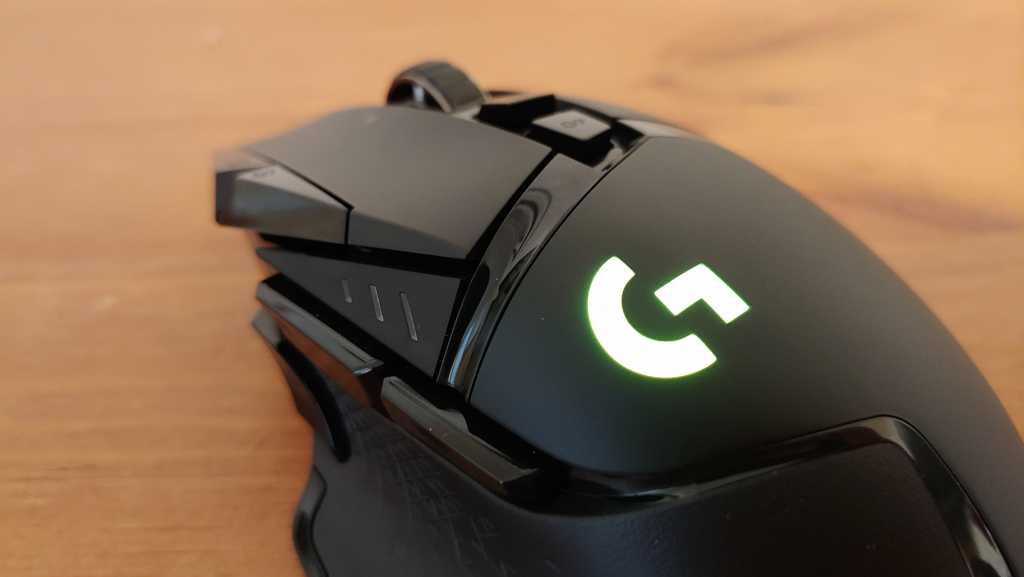 After years of asking the beloved Logitech G502 finally goes wireless, and with full Powerplay compatibility as well. This one won’t be leaving our desks for a while.

For nearly two years, every meeting I had with Logitech ended the same way: “So uh, any news on a wireless G502?” and for nearly two years the answer to my question was no. It was only a matter of time though. After all, you don’t pivot your focus to wireless mice and leave your best-selling wired model behind.

Well, the day’s finally here and the answer was finally “Yes, we do have something to share.” Today, Logitech officially unveils the G502 Lightspeed. I’ve had one sitting on my desk for about a week now, and I’ll tell you this: It’s going to stay for a while.

The Logitech G502 Lightspeed looks exactly like its predecessors except, you know, it doesn’t have a cable. And that’s exactly how it should be, yeah? Never mind the fact that, as Logitech told me last week, nearly every single component’s needed to be redesigned to make the transition from wired to wireless. The end user doesn’t care about that. Pay no attention to the team of engineers behind the curtain. To you at home, it should seem like Logitech simply picked up an older G502 and snipped off the cable.

And in that regard the Logitech G502 Lightspeed is an unmitigated success. This is the G502, the same one I used daily for three years straight between 2014 and 2017, and off-and-on after as well. It has the same gentle curve, the same elongated oval footprint, the same compact thumb rest off the left side. It’s still one of the most comfortable mice I’ve ever used—highly subjective, sure, but I’m far from alone in that assessment.

As for functionality, the eleven-button layout remains intact, including the tilt wheel and the pair along the side of the left mouse button. Even the dual-mode scroll returns, allowing you to switch between smooth and notched scroll modes at the press of a button. All the particulars of the G502 have been recreated, the features that have kept it on our list of the best gaming mice since its inception.

All of them except the cable, that is.

It’s an amazing design feat, one so clever the average user won’t even notice. The wired and wireless Logitech G502 might as well be twins. Here, take a look at 2018’s G502 Hero and the G502 Lightspeed side-by-side:

There have been slight changes, of course. The G502’s traditionally used a solid metal scroll wheel, a fairly heavy piece of hardware. The more fastidious among you might notice the G502 Lightspeed trades out solid metal for the spoked wheel already in use on the Logitech G903, cutting down on weight without reducing actual performance—though I admittedly find the soft-touch rubber coating less distinctive than the raw metal of the G502 Hero.

Most of the noteworthy changes have been made to the bottom of the Logitech G502 Lightspeed though. Since its initial release, the G502’s underside has featured a large removable panel that allowed the user to insert up to five 3.6 gram weights, either to make the mouse heavier overall or to skew the weight distribution to one side.

The Logitech G502 Lightspeed is Powerplay compatible though (more on that later), meaning the underside needed to be redesigned around the circular Powercore charging module. Like the G703 and G903, this means every G502 Lightspeed ships with a placeholder, a circular plastic disc that slots into the bottom and is held magnetically.

And like the G703/G903, this circular disc allows for some weight customization. The design’s been slightly refined this time though. Where the G703 and G903 shipped with two discs, one empty and one filled with a single 10 gram weight, the G502 Lightspeed allows you to remove the included circle of plastic and insert up to two 4.0 gram weights straight into it, adding up to 8.0 grams of weight to the rear of the mouse. There’s no easily-lost second disc, and it’s a more granular system.

There’s an obvious caveat though: Powerplay users can’t take advantage, because these weights fill the same space as the Powercore module.

Thus the Logitech G502 Lightspeed features a second system for weight customization. Like the older G502s, there’s a removable plastic panel you can peel off—though the one on the G502 Lightspeed is smaller and arrayed more towards the front of the mouse. You can slot in up to four 2.0 gram weights though—all of them, or two balanced out, or arrayed so the weight distributions thrown to one side or the other like the previous models.

Suffice it to say, if you’re determined to weigh down the G502 Lightspeed, you can.

That said, the Logitech G502 Lightspeed is actually the lightest G502 to-date, addressing a common complaint kicked around since the mouse’s first iteration. The G502 Hero weighed in at a whopping 121 grams, and topped out at 139 grams—well above the 100 gram benchmark held as the industry ideal. But the G502 Lightspeed somehow cuts the weight to 114 grams.

Seven grams might not seem like a lot, but it’s a minor miracle. Think about it: The G502 Lightspeed looks and feels like its predecessor, but includes both a battery and the necessary wireless hardware—and yet it weighs less than the G502s of old.

It’s still on the heavier end, for sure, weighing more than both the G703 (106 grams) and the G903 (108 grams) as well as Razer’s recent Mamba Wireless redesign (106 grams). The big worry though was that a wireless G502 would add to the wired model’s already prodigious weight. If you had no problem with the G502 before (and I didn’t), then the Logitech G502 Lightspeed should be no issue. If anything, you might be tempted to load it up a bit to match the old model.

I’ve also found the G502 Lightspeed glides better, probably due to the way the feet have been redesigned around the Powercore module. There’s now a large U-shaped pad following the rear contour, which makes a subtle but significant difference.

That about covers the changes. The core of the G502 Lightspeed is the same flagship Hero sensor used on all Logitech’s mice these days, including last year’s G502 Hero model. The Hero sensor is essentially a power-efficient version of the PMW3366 that first catapulted the Logitech G502 to fame, slightly upgraded to reach 16,000 DPI instead of 12,000. Those numbers are largely meaningless though, with most players staying in the 400 to 3,500 DPI range, and Hero’s primarily noteworthy for being a high-performance sensor that’s less a burden on battery. To whit, the G502 Lightspeed will reputedly last up to 48 hours with the RGB lighting zones on, or up to 60 hours with them disabled.

Those are huge numbers. And sure, Hero’s partially to thank, but I can’t stress enough how far both batteries and power management have come in the last few years. The G703 and G903 both use Hero sensors, and yet they’re rated for a comparatively dismal 24 hours of battery, or 32 with the lighting disabled. The aforementioned Razer Mamba Wireless upgraded to 50 hours in 2018. Now we have a wireless mouse that can hit 60 hours on a single charge. Amazing.

I wouldn’t know though, because I haven’t run the G502 Lightspeed down from a full charge. As I said, the Logitech G502 Lightspeed is Powerplay compatible, and that’s the reason I’ve waited two years for a wireless G502.

Prior to 2017 I wasn’t much of a wireless mouse fan. Even once manufacturers eliminated the performance gap between wired and wireless, I found it irksome having to remember to plug in a wireless mouse every night when I could just leave one plugged in all the time and avoid thinking about it.

And then Powerplay came along, a mouse pad that could wirelessly trickle-charge a compatible device while it was in use. As I wrote back then:

Nope. As advertised, the G903 has cycled between 80 and 95 percent battery, discharging and recharging to keep the battery healthy but otherwise staying ‘fully charged.’ After about a week you stop thinking about it.”

Others (Razer, Corsair) quickly mimicked Logitech but none measured up, and thus Powerplay’s been a near-constant fixture on my desk for the last two years now. The G502 Lightspeed is the first addition to that ecosystem since the initial product release.

It’s easy as ever to swap to a new mouse, if you’re an existing owner. I used Logitech’s G-Hub software to desync the G903 from my existing Powerplay mouse pad, paired the G502 Lightspeed by simply turning it on, transferred the same Powercore module I’ve used the last two years, and I’ve been using the G502 uninterrupted ever since—without even once plugging it into my PC directly.

It still feels like magic to me, even two years later. Or rather, it feels like magic when I’m forced to think about it, as when reviewing the now-wireless version of a mouse I used wired for years. As my past self said, the vast majority of the time I never have to think about Powerplay at all, and that’s exactly what makes it cool.

Of course, it’s also expensive as hell. The G502 Lightspeed will already run you $150, and Powerplay is an extra (and technically unnecessary) $100 purchase on top. $250 is an exorbitant amount of money to spend on a mouse, I won’t argue the fact—especially when the comparable wired variant is $60 on Amazon as I write this. Nearly $200 just to ditch the wires? Ridiculous!

And yet I can’t praise Powerplay enough. I’m fully a convert, and have found it difficult to go back to wired mice on the rare occasions we’ve reviewed them. Sure, the problems Powerplay solves are relatively minor, but the convenience of never having to think about those issues at all? Hard to overstate, especially over the span of a few years.

The G502 Lightspeed was worth the wait. Logitech’s managed to reproduce the mouse people know and love, but ditch the cord and bring it in at a more appealing weight—and improve the battery life over the G703 and G903 to boot.

It’s one hell of a coup. As I said, I used the wired G502 daily for three years, only trading it out for a G903 when Logitech’s Powerplay tech enticed me to go wireless. Now there’s a Powerplay-compatible G502, and I don’t expect it to leave my desk for a very long time. It’s hard to imagine what could replace it, honestly.

I’m sure something will. Time keeps moving and technology keeps improving, and once upon a time we all used trackball mice. But for now at least, the Logitech G502 Lightspeed is the one to beat.