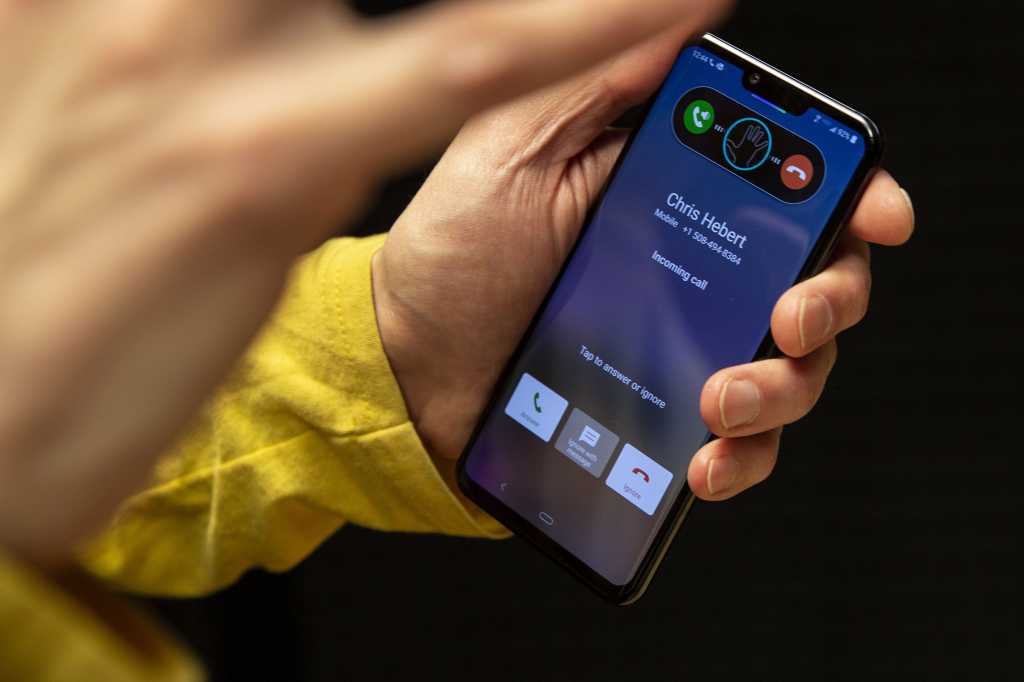 The LG G8 has a great screen and processor, but its gimmicks are just too much to bear.

It’s not enough for LG that the G8 ThinQ has the best processor, a great screen, an impressive battery, and a solid camera. Like nearly every G phone that came before, the G8 also has to be different, and that’s where it gets tripped up.

Had LG focused on the things that matter while undercutting its Samsung and Google rivals, it might have had a hit on its hands. Instead, the LG G8 is filled with gimmicks that might be fun initially, but their persnicketiness and general uselessness ultimately frustrate and cheapen the experience.

That’s a shame, because underneath all of the gimmicks is really good phone. Maybe even a great one. 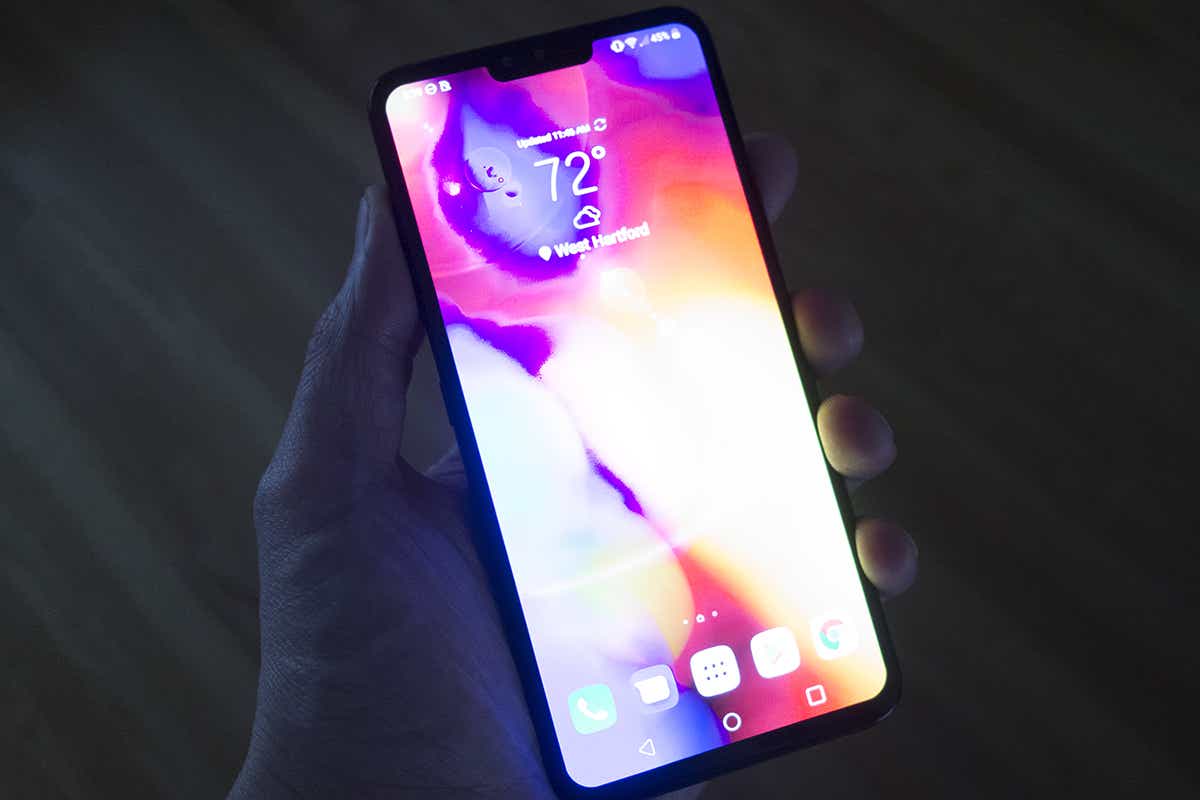 Mind you, the G8 is still saddled with LG’s overly staid design language and UI deficiencies. But with top-of-the-line specs and gesture navigation, LG’s latest flagship should be able to stand up to the Galaxy S10 or Pixel 3 XL. And it probably would, if not for all of those gimmicks.

This review is part of our ongoing roundup of the best Android phones. Go there for reviews of competing products and how we tested them, plus buying advice.

The design remains the same

If you’ve ever seen the LG G7, you already know what the G8 looks like. It has the same 6.1-inch display, ports, and overall shape, and comes in the same two colors: black and silver. The dedicated Google Assistant button remains. While the G8 is a touch heavier at 167 grams (versus 162 for the G7), the two phones have an extremely similar aesthetic and frame, right down to their unbalanced bezels:

Things are a little different on the back. LG has mounted the camera array horizontally rather than vertically, bringing it more in line with the V40 than with previous ‘G’ phones. It’s also fully encased under the glass, which gives it a sleeker, smoother look compared to other all-glass phones. If not for the fingerprint sensor in the middle, in fact, the back of the G8 would be just as smooth as the front. It’s a good look, and makes the camera bumps on iPhone XS all the more unsightly.

One drawback to all that uninterrupted glass, however, is slipperiness. On several occasions, my G8 slipped off a table that either had an otherwise imperceptible decline or was rattled enough to move the G8. For the first time since I’ve been writing phone reviews, I actually had to send it back because my first review unit fell and cracked. So you’ll probably want to put it in a case, which negates the smoothness of the design.

A top-notch screen, processor, and battery

The G8’s display is the same size and resolution as the G7’s, notch and all, but there’s one big change: LG has switched from LCD to OLED. LG’s OLED screens have been somewhat problematic in the past, with dull colors and banding, but there’s no such issues here. It’s definitely a nice upgrade over last year’s LCD, even with a notch that LG insists on calling a “new second screen.”

Audio continues to be one of the hallmarks of the LG’s flagships, and as such, the Quad DAC headphone jack and Boombox sound make a return on the G8. What isn’t present is a receiver on the front, but most users probably won’t notice it’s missing. For one, there’s nothing in the design to indicate that it’s missing, but most importantly, LG has developed a nifty technology called Crystal Sound OLED that uses vibrations to turn the display into a speaker, which might seem weird but it’s not. There’s no perceptible feel to Crystal Sound when on a call, and it doesn’t sound like a speakerphone either. It’s the best kind of tech—it just works.

Two other high points on the G8 are its speed and battery life. Like the Galaxy S10, the G8 uses the newest Snapdragon 855 chip. Consequently it’s an absolute workhorse, launching, switching, and handling apps with ease. Benchmarks backed up my real-world impressions, and while it’s not a massive boost over the G7’s Snapdragon 845 (8,980 vs 7,832 based on PC Mark’s Word 2.0 score), it’s definitely more than enough speed for any user.

LG has upped the battery capacity from 3,000mAh to 3,500mAh, and the difference is clear. For whatever reason I haven’t been able to run PC Mark’s Work 2.0 battery life test on an LG phone since the G6, but suffice to say, it’s a marked improvement over the G7, which was somewhat disappointing. During my testing, I never had to plug it in before I was ready to put it down for the night. Only once did I reach a critical state below 15 percent.

The G8 runs on Android 9, but you won’t find Digital Wellbeing or any kind of screen-time monitoring. Gesture navigation is represents, however, and you get a similar implementation of the swipe-up-on-the-home-button method that you’ll find on the Google Pixel. LG still hasn’t quite mastered the app drawer, but the implementation is good and you can toggle back to the old way if you’d prefer.

Unfortunately, the rest of UX 8.0 leaves much to be desired. LG’s Android skin is both boring and unintuitive, with bloated settings, unwanted apps, and an overall clunky aesthetic. Much like Samsung did with the excellent One UI, it could use a complete makeover.

Time-of-flight is dumb on arrival

The rest of the G8’s featured tech is where the problems creep in. Filling the space left by the receiver in the notch is the G8’s unique signature feature, a time-of-flight “Z Camera” front sensor that’s used for three things: 3D facial unlock, vein and palm unlock, and touch-free gestures.

Let’s start with the best of the three, facial unlock. It’s been more than a year and a half since Apple unveiled Face ID and the True Depth camera in the iPhone X. The G8 is the first Android phone shipping in the U.S. that even comes close to mimicking the tech. The concept is the same—move your face in a circular motion to register it and simply look at your phone to unlock it—and in my testing it worked well. The field of vision is roughly the same as Apple’s, so you’ll need to hold your phone straight up to your face for it to work. I was impressed with the accuracy, though the angle isn’t as forgiving as it is on the iPhone, and it lacks an attention toggle for an extra layer of security.

Hand ID, LG’s name for its bizarre palm unlocking feature, doesn’t work nearly as well. Not only did it fail to recognize my hand more than half the time, but I struggled to find a legitimate case scenario in which it would be useful. Even if it worked, raising your palm to your phone while holding it with the other hand is cumbersome at best. Presumably LG is thinking of those times when your G8 is lying flat on a table. But it’s just as quick to use a pattern or a PIN.

While Apple has baked Face ID into all aspects of iOS, LG reserves face unlock and Hand ID for unlocking. That’s partly because Android doesn’t support time-of-flight scanners for system-wide authentication, and partly because LG has focused its time-of-flight innovations on what might be the most useless feature to ever appear on a smartphone: Air Motion.

Sadly, it’s also the G8’s most marketable feature, allowing you to control parts of the phone without needing to touch the screen. Instead of taps and swipes, you hold your hand about a six inches from the front camera until your hand is recognized. Then you can wave to do things like play music and answer calls, and twist to raise and lower the volume. It’s something people are going to want to try out and it might even convince a few people to buy one.

However, it doesn’t nothing to make the G8 better. When Air Motion works, it’s fun to use and show off. There’s a tremendous potential for accessibility that could alleviate the need for cumbersome head switches, and the prospect of waving your hand to dismiss a call is quite intriguing. As it currently stands, however, Air Motion requires a precision most users won’t be willing to deal with. It’s still easier to press the buttons.

A camera with little new to offer

There’s nothing wrong with the G8’s camera, there’s just not much new about it either. Like the G7, the G8 has a dual camera, and the specs are very similar:

As such, the two phones take very similar pics. In an age of triple and quadruple cameras, the G8’s array feels a little pedestrian. Its ultra-wide lens is no longer a novelty, and what was once a leading camera app is more or less run-of-the-mill now. Thankfully, the ThinQ bits have been toned down, too: For instance, the AI Cam, which used to visually process every aspect of the scene with words that flew across the screen, is little more than normal computational adjustments on the fly now.

The G8’s camera offers a few improvements. Auto focus works better and faster, and the new Night View mode isn’t nearly as artificial looking as the Super Bright Camera mode was on the G7. However, when comparing the G*’s images to those of a top-notch camera such as the Pixel 3, or even last year’s Samsung Galaxy S9, the differences are stark.

For $849, I expected more from the LG G8. It’s a bummer than it reserved its triple-camera setup for the international variant. Last year’s LG V40 has one of the best cameras in a smartphone, if for no other reason than it was super fun to use, but the G8’s camera is just tired.

Should you buy an LG G8?

There are plenty of reasons to buy the G8: top-of-the-line processor, excellent battery life, great screen, solid camera. But great specs and nice hardware aren’t enough when you’re competing with the Galaxies and Pixels of the world. The unique features that should make the G8 worthy of its $829 price tag are unfortunately where it falls short.

The G8 would be easier to recommend if it were $200 cheaper. As it stands, you can get a Galaxy S10e or an iPhone XR for $70 less than a G8, and both of those deliver a better UI and equal or better performance without the cheap tricks. The G8’s time-of-flight tricks only serve to cheapen the experience, rather than strengthen it with strong facial recognition and portrait shots.

So if you can get it for a healthy discount, I suppose the G8 is worth considering. But even then, I’d probably recommend the Galaxy S10e instead. For my money, the G8 is just one too many gimmicks over the line.