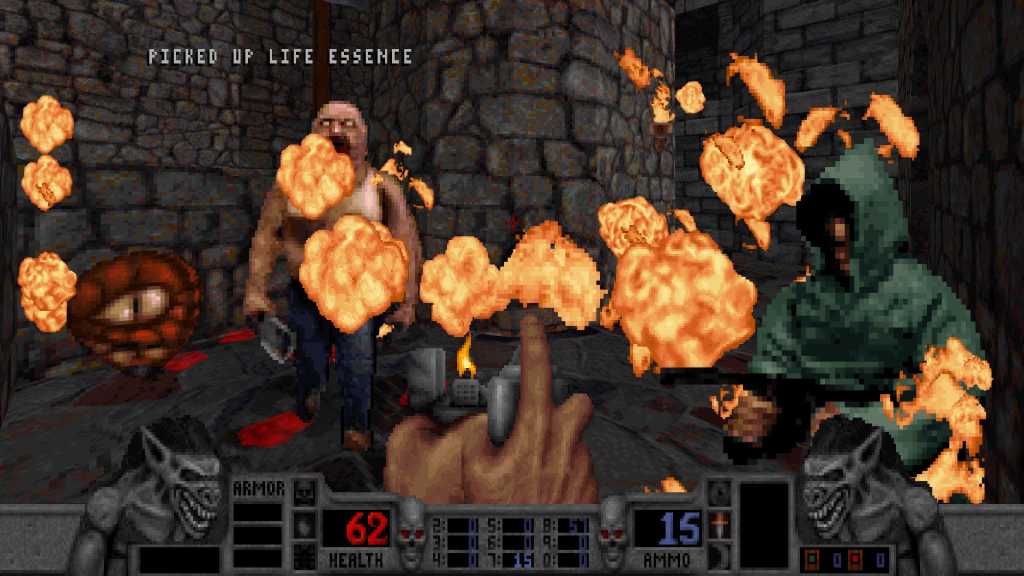 Can you feel that? It’s E3, right around the corner—meaning the slow parade of game announcements starts now of course, about a month before the show. The Final Fantasy VII remake finally resurfaced this week, there’s a John Wick puzzle game on the way, and Ubisoft unveiled a new Ghost Recon.

That news, plus the Borderlands 3 saga takes an even weirder turn, Blood gets a proper remaster, QuakeCon heads to Europe, Cities: Skylines goes to school, and Hitman 2 gets divvied up even more.

Give me a gun

You might expect a John Wick video game to look a lot like Max Payne or something, all slow-motion and death-defying stunts. Instead it’s coming from the developers behind polygonal platformer Thomas Was Alone and stealthy Volume, Bithell Games. And it’s…turn-based.

It looks intriguing though. The trailer opens with the line “It is said that combat is like a game of chess,” and that’s definitely the vibe here as you direct Mr. Wick to shoot/punch/kick various foes before they can react. Not what I expected, but maybe it’s better than what I expected. More creative, at the very least.

IO Interactive keeps experimenting with new ways to sell Hitman 2. First it was sold as a full $60 game. Then the opening prologue mission, Hawke’s Bay, was peeled off and given away for free. Now you can spend $12 on the Hitman 2 – Miami Package, which includes the entire Miami mission (the auto race and museum) as well as any Elusive Targets that take place there—which, for the moment, means Sean Bean.

It’s funny. 2016’s Hitman started episodic and was eventually released a compiled boxed version. Hitman 2’s headed the opposite direction, starting as a complete boxed version and being divvied up piecemeal. I’ll be curious whether the process continues.

QuakeCon’s been tethered to Texas, home to id Software, for nearly 25 years now. It’s ready for a semester (or a weekend) abroad though, as evidenced by this week’s reveal of QuakeCon Europe. Set for July 26 and 27 in London, it’ll take place simultaneous with the traditional Dallas-area QuakeCon and allow our European PC brethren to play Doom Eternal, Wolfenstein: Youngblood, and so on. Oh, and just like the US instance, QuakeCon Europe is free to attend as long as you RSVP. Pretty neat. Wear deodorant.

Vampire: The Masquerade – Bloodlines 2 is already hitting the trailer circuit hard almost a year prior to release, though admittedly only in hand-drawn cinematic form. This week it’s the reveal of the Tremere clan, masters of Thaumaturgy. That’s blood magic for the uninitiated among you.

And speaking of the red stuff, Monolith’s 1997 shooter Blood received a $10 remaster this week courtesy of resurrection pros Nightdive Studios. According to the Steam page it adds customizable controls, 4K support, unlocked frame rates, post-processing effects, and rewritten netcode for eight-person multiplayer. Pretty basic stuff, but it’s nice to see some love given to one of the less prominent games of the era.

The fall release schedule’s pretty empty at the moment, but Ubisoft staked a claim this week with Ghost Recon Breakpoint, due to release October 4. It’s a follow-up to 2017’s Wildlands but more focused on survival aspects, with soldiers able to sustain semi-permanent injuries as they try to infiltrate the Auroa Islands and uh…kill guys, because they’re bad.

I don’t know. Wildlands is one of the blandest games I’ve ever played but it sold a ton, so I suspect Breakpoint will be the same and accomplish the same. You can check out 15 minutes of mission footage below.

I’ll go ahead and bet the Final Fantasy VII remake will not release in 2019. Bold, I know. It exists, though! Sony held another of its Nintendo Direct-style shows this week and ended on a minute or so of new footage—the first time we’ve seen the Final Fantasy VII remake in action since 2015, to my knowledge. Expect more out of E3 next month, with Square set to host a press conference in Sony’s old slot on the Monday night before the show.

There’s not much to this news, but Sega purchased Two Point Hospital developer Two Point Studios this week. To be honest I thought Sega already owned Two Point Studios so this comes as a bit of a surprise, but uh, good on them. Hopefully we’ll get more charming sim games out of them soon, with co-founder Mark Webley quoted saying that they’ll “continue to evolve Two Point County.”

Maybe Two Point County needs a school? Failing that, there’s always Cities: Skylines though. Yes, this week the always-expanding city builder announced the new Campus expansion which allows you to build out a custom college campus, complete with sports teams and lots of neoclassical architecture.

Last but certainly not least, let’s get into Gearbox. The Borderlands 3 reveal has already been marred by ongoing lawsuits concerning Gearbox CEO Randy Pitchford, and then Pitchford publicly browbeating Game Informer after the gameplay reveal last week.

But just when you thought it couldn’t get any uglier, it did. After the gameplay reveal, fans noticed that Claptrap didn’t sound quite the same anymore, with former Gearbox employee David Eddings confirming that he is not reprising the role for Borderlands 3—specifically, that Gearbox wouldn’t pay him enough. Pitchford then said something about how Eddings had been made a generous offer, which prompted Eddings to fire back with a lengthy Twitter thread alleging that Pitchford “physically assaulted [him] in the lobby of the Marriott Marquis at GDC 2017” and following up with “I even blocked him a couple years ago for stalking me on social media.”

So much drama, and the game’s not even out for six months. We’ll see whether anything else comes to light between now and then I guess.