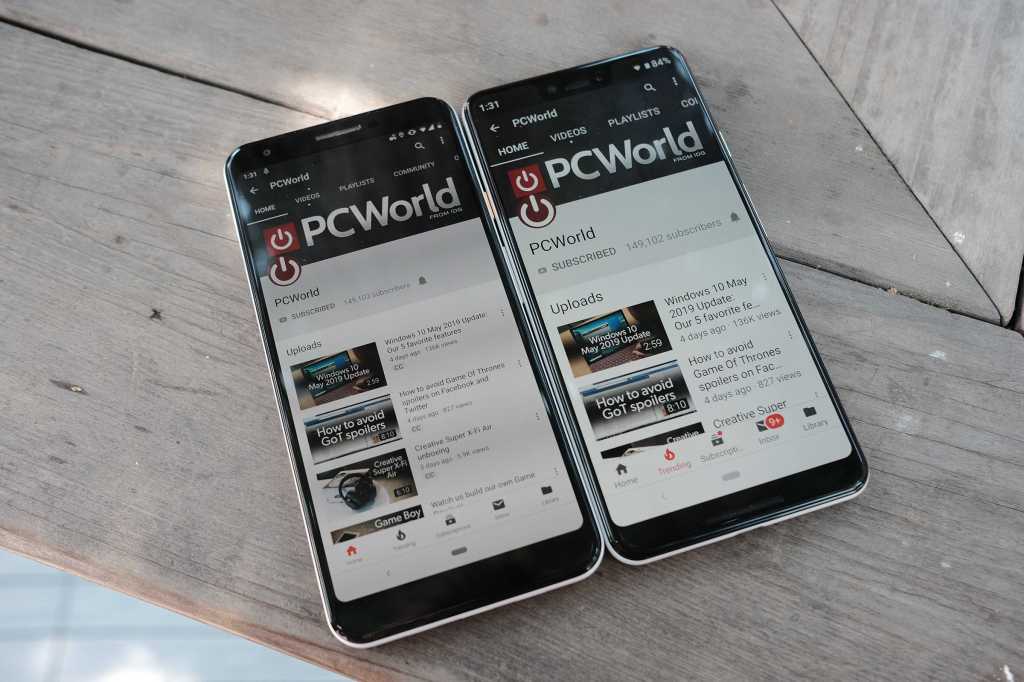 For the first time ever, the choice between buying a Pixel is more than just the big one or the small one. At its I/O Developer’s Conference Tuesday, Google took the wraps off the Pixel 3a, a brand new entry to the Pixel line that costs half as much as its older sibling. But how much are you really giving up when you opt for the cheaper model? Let’s break it down:

Google Pixel 3a vs Pixel 3: Design

The Pixel 3 and Pixel 3a external designs are similar in many ways, including size. The Pixel 3a is slightly larger all around:

Moving on to major design characteristics, the Pixel 3 and 3 XL are distinctive—if not as beautiful as flagships from Apple or Samsung. From the 3 XL’s notch to the two-tone frosted-glass back, the Pixel 3 family is instantly recognizable at a distance.

The 3a follows a similar aesthetic, with some tweaks. The 3a XL doesn’t have a notch, for instance, so there’s a fair amount of space above the screen. The other big change is on the 3a’s back: It’s made of plastic rather than glass.

As far as external components, both have a single camera lens in the top left corner and a smooth “window” above the matte body. The 3a lacks a front-facing speaker below the screen, as you’ll find on the Pixel 3.

The 3a is also a bit lighter, particularly comparing the larger models of each:

Google Pixel 3a vs Pixel 3: Display

While it would have been perfectly acceptable for Google to put an LCD display in the Pixel 3a, it opted for OLED technology, like the Pixel 3 line. However, the displays differ in quality when it comes to resolution and ppi:

While the smaller phones’ displays are pretty close, the 3 XL uses a much higher-quality display than the 3a XL does.

The displays are also protected differently against drops. The Pixel 3 and 3 XL use Gorilla Glass 5, while the Pixel 3a and 3a XL use Dragontrail glass.

Google Pixel 3a vs Pixel 3: Performance

One of the biggest differences is inside. Because the Pixel 3a is a budget phone, it uses a much slower processor:

The Snapdragon 670 is decidedly a mid-range processor, while the Snapdragon 845 was last year’s top-of-the-line chip. In benchmark testing, the 670 matches up closest with the original Pixel’s Snapdragon 821 processor, so you’re definitely giving up a fair amount of performance with the cheaper model.

As far as memory goes, all four phones use the same 4GB 4 GB LPDDR4x RAM. That should be plenty to keep apps and animations snappy.

Google Pixel 3a vs Pixel 3: Battery and charging

Google hasn’t skimped on the battery with the Pixel 3a in the slightest. In fact, it’s a little bigger than the ones in the Pixel 3:

While Google says both will last “all day,” heavy users should be able to squeeze a little more out of the Pixel 3a, especially given its lower-powered processor, as well as the lower-resolution display on the 3a XL compared to the 3XL.

When it comes to charging, both phones will fill up fast. With the bundled 18W USB-C power adapter, Google says you’ll get seven hours of use on a 15-minute charge. However, you’ll definitely need to plug in your Pixel 3a in at some point, because it doesn’t have wireless charging like the Pixel 3 does.

Google introduced its first dual-camera system with the Pixel 3’s selfie cam, so it’s quite different from the Pixel 3a’s standard single cam:

Without a second camera, the Pixel 3a is missing out on the Group Selfie Cam feature, but when taking regular shots, you still get portrait mode and Super Res Zoom.

Unlike the front camera, the Pixel 3a’s rear camera is exactly the same as the one on the Pixel 3:

The identical camera hardware is mirrored in the app as well. That means Top Shot, Night Sight, and the new Time Lapse are all available, as well as portrait mode. One note: On the Pixel 3, you get free unlimited Google Photos storage of everything you shoot no matter the size, but on the 3a, Google saves only the high-quality version for free, just like on other phones.

Google Pixel 3a vs Pixel 3: Audio

Google Pixel 3a vs Pixel 3: Storage

While both sizes of both phones come with 64GB of storage in the base model, only the Pixel 3 and 3 XL include an option to upgrade to 128GB for an extra $100. None of the phones have an expandable storage slot for an SD card.

Google Pixel 3a vs Pixel 3: Colors

The Pixel 3 and 3a both come in black and white, with a slight variations: The power button on the white Pixel 3 is light green, while it’s orange on the Pixel 3a. Each phone also has an exclusive color:

The Pixel phone has been exclusively sold in Verizon stores since its arrival in 2016, but the unlocked version has always supported all bands and networks. That’s changing with the Pixel 3a. Now you can also buy it through T-Mobile, Sprint, and U.S. Cellular stores. AT&T customers will have to settle for the unlocked version, however.

Google Pixel 3a vs Pixel 3: Price

Obviously the two phones have very different price tags, with the Pixel 3 and 3XL occupying the premium space and the 3a and 3a XL targeting budget-conscious buyers:

Google Pixel 3a vs Pixel 3: Miscellaneous

Other than the categories above, there are a few more things that are different between the Pixel 3 and 3a. The Pixel 3 is rated for IP68 dust and water protection, meaning you can dunk it in 1.5 meters (about five feet) of water for up to 30 minutes. Also, if you’re a VR fan, you won’t be able to use the Pixel 3a with Google’s Daydream headset.

Google Pixel 3a vs Pixel 3: Conclusion

If you’re considering the smaller form factor, the Pixel 3 and 3a are extremely similar. They both have 1080p OLED displays, the same rear camera, very similar batteries, and bezel-heavy designs. So the difference really comes down to whether the Pixel 3’s faster processor, dual selfie cam, wireless charging, and water resistance are worth an extra $400.

When it comes to the XL, the display on the Pixel 3 XL is both bigger and denser than the 3a, and otherwise the differences are pretty much the same as they are for the smaller models. The price difference is wider: $420. That means you can actually buy a Pixel 3a and a Pixel 3a XL for less than the price of the 3 XL.