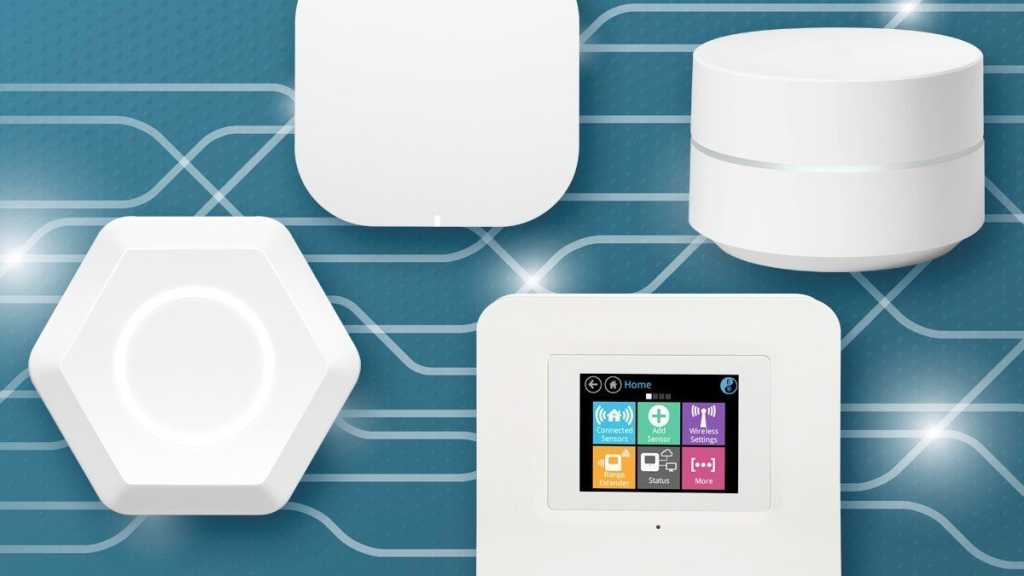 Whether you’re decking out a smart home or you just want the best experience streaming music and videos, a great wireless router is an essential element of the modern tech life. If you find that your place has a lot of dead spots or you’re suffering with low wireless throughput, we recommend investing in a good-quality mesh network. A mesh network consists of a Wi-Fi router with one or more satellite nodes strategically placed around your home in order to blanket all areas with coverage.

You can deploy a mesh Wi-Fi router without any satellites, but you’d be losing out on all the coverage benefits that mesh technology provides—a mesh system will therefore provide you the best bang for your buck. Below we have picked the best mesh systems around that deliver excellent coverage and strong performance.

After our picks, we break down the features you should look for and explain the jargon you’ll encounter while shopping for a mesh Wi-Fi system.

The secret to the Orbi RBK50’s success is Netgear’s dedicated 4×4, 1,733Mbps radio used for data backhaul between the router and its satellites (the RBK50 comes with one satellite, which Netgear says is sufficient to blanket 5,000 square feet). We also like the fact that the Orbi router has a built-in three-port ethernet switch (the satellite has a four-port switch), because those ports provide so much flexibility in terms of connecting other devices to your network, be it a NAS box for media streaming and data backup, a network printer that doesn’t support Wi-Fi, or an older ethernet-only A/V receiver in your entertainment center.

An Orbi network can also be expanded with a smart speaker (the Orbi Voice, which supports the Amazon Alexa digital assistant) and a purpose-built outdoor satellite (the Orbi Outdoor). Orbi devices, on the other hand, are among the most expensive mesh Wi-Fi components, and the RBK50 kit in particular is overkill for for smaller spaces. 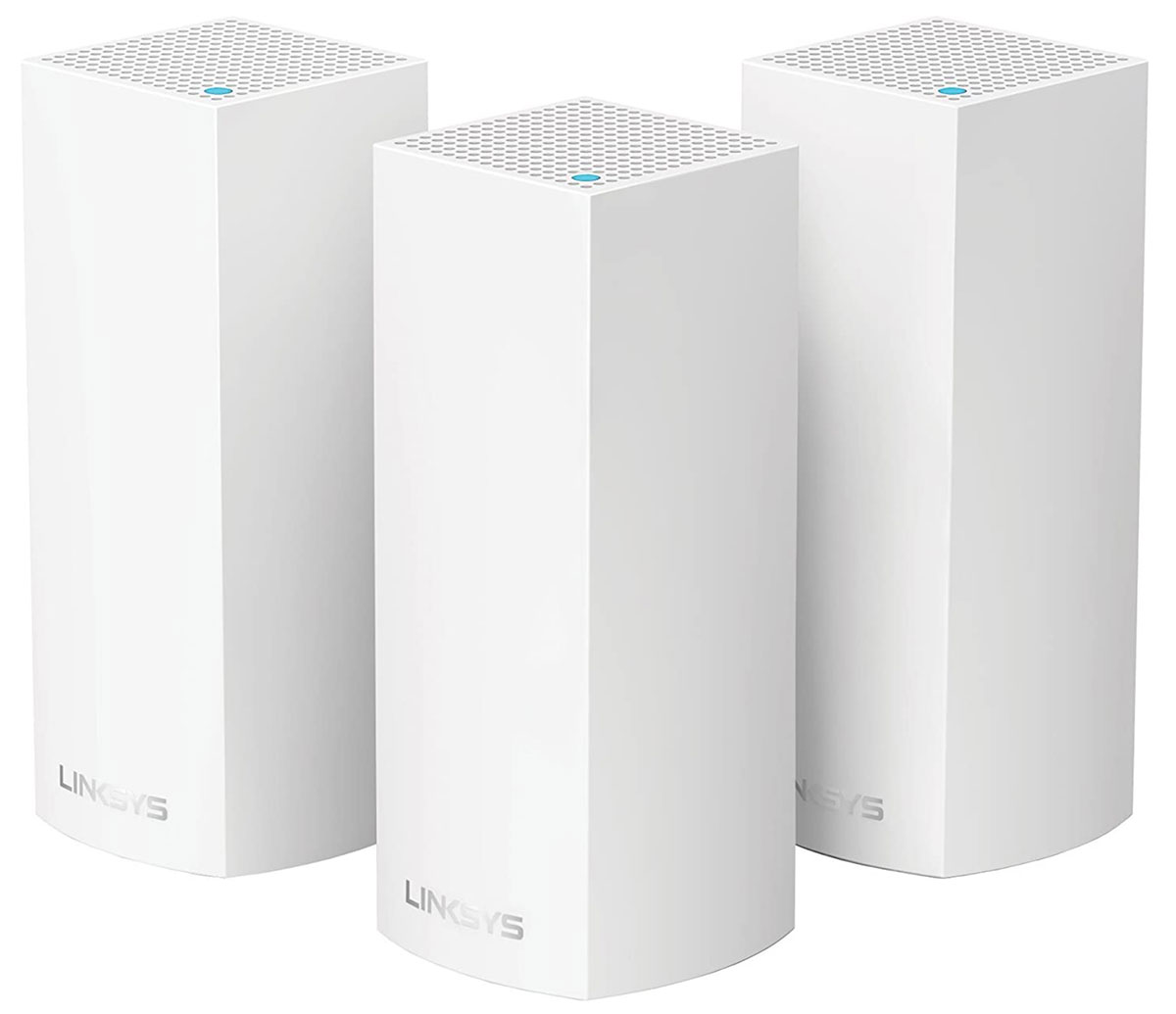 Like Netgear’s Orbi RBK50 kit, the Linksys Velop is a tri-band router that dedicates one of its three Wi-Fi networks to data backhaul. Unlike Netgear’s offering, however, the Velop dynamically chooses the least-congested channels for that task. On the downside, the Velop’s maximum data backhaul speed is 867Mbps, compared to the Orbi RBK50 kit’s 1,766Mbps. Two Velop nodes proved to be the sweet spot to blanket our 2,800-square-foot test home with Wi-Fi, which would cost $75 less than the three-node kit that we reviewed. 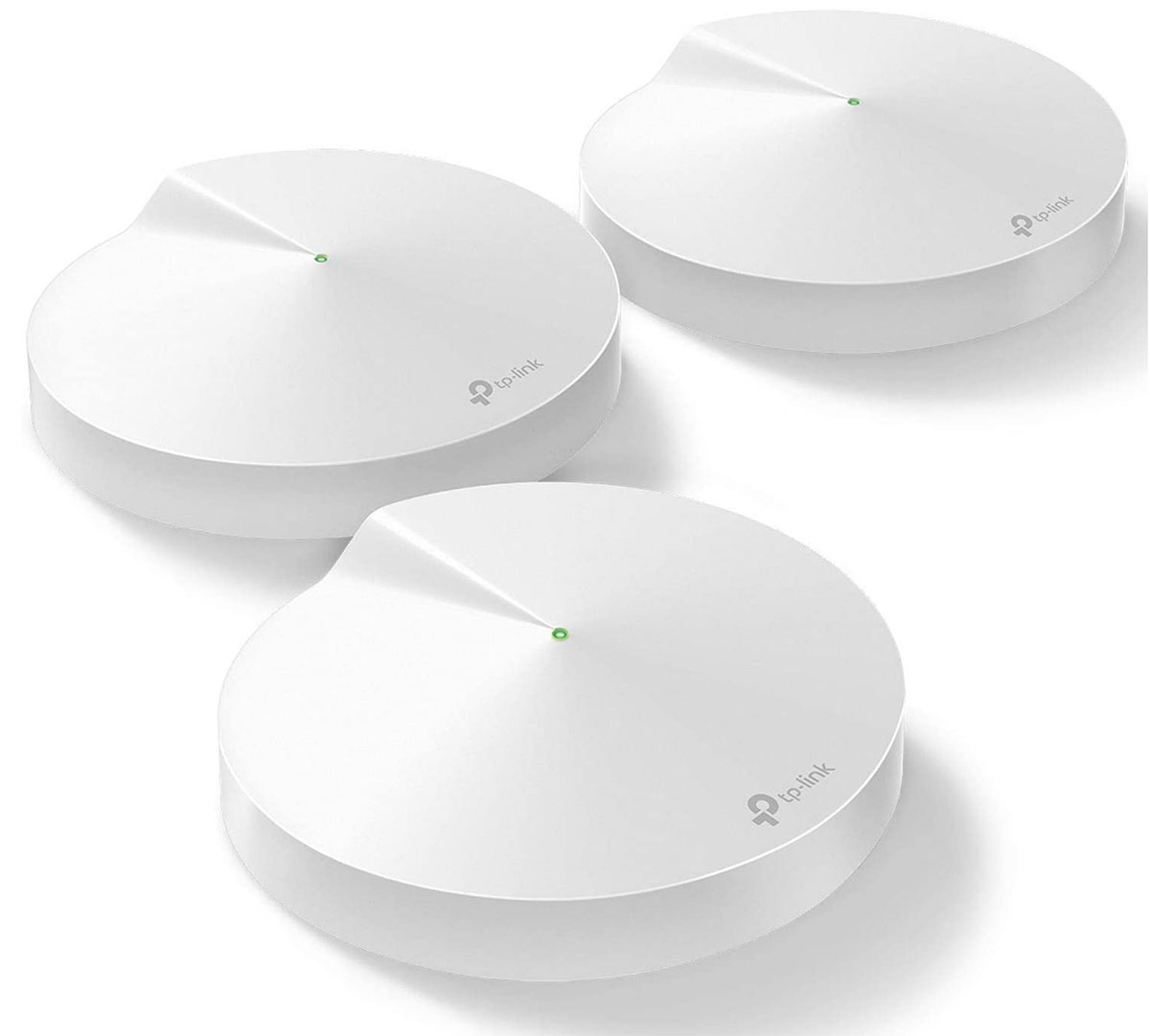 TP-Link’s Deco M5 is a dual-band Wi-Fi system operating one network using radio spectrum in the 2.4GHz band and a second network using spectrum in the 5GHz band.  As such, the Deco M5 must rely on the same bandwidth for data backhaul. And that is the biggest factor that differentiates the Deco M5 from the more-powerful tri-band mesh-network offerings from Linksys and Netgear that use dedicated networks for backhaul. That said, the Deco M5 delivers a ton of value for the money. 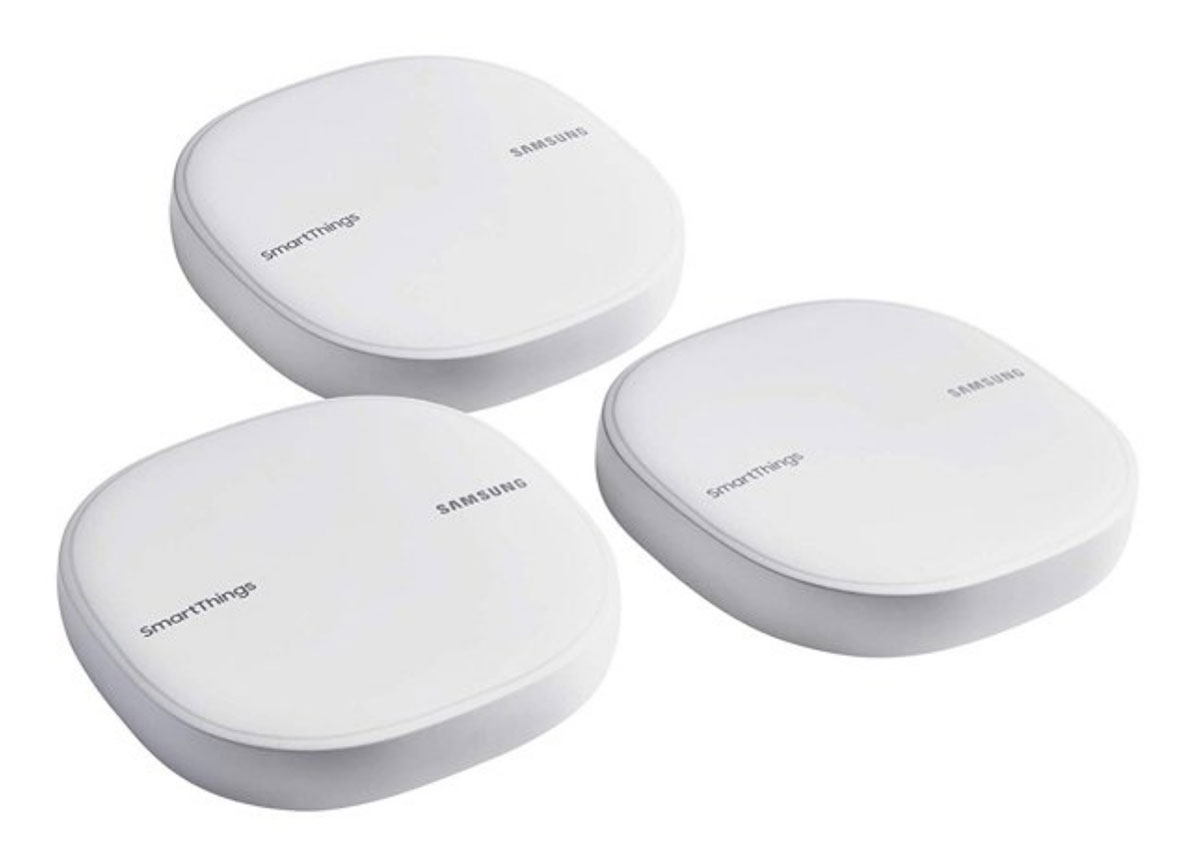 How to choose the right type of router

This guide focuses on mesh Wi-Fi routers because they are the most adept at blanketing a home with wireless coverage. A less-expensive conventional router might be adequate for smaller single-family homes, condos, and apartments if you can place the router near the center of your home. But that can be challenging since the router must be connected to the gateway (e.g., a DSL or cable modem) that provides your broadband access, and those connections are more typically located on a perimeter wall.

Mesh Wi-Fi systems can be divided into two categories: Straightforward routers with one or more wireless satellite nodes that you strategically place around your home, and router/satellite combos that can also operate as smart home hubs. That is, mesh Wi-Fi systems that include the types of radios (e.g., Z-Wave and ZigBee) that can control smart home devices (smart bulbs, switches, thermostats, locks, sensors, and so on).

Traditional routers tend to offer more granular control over your network, with tweakable settings for features such as QoS (Quality of Service), port forwarding, VPNs, FTP servers, and much more. Most have built-in ethernet switches (four ports or more), so you can hardwire network devices directly to the router. And they typically have one or two USB ports that can be used to share a printer or USB storage with all the devices on the network. I’d venture to say that most people who buy traditional routers never touch most of those settings or even use many of their advanced features; they buy them because higher-end routers deliver faster Wi-Fi performance.

A dual-purpose router with smart home features will have a ZigBee and/or Z-Wave radio that can communicate with sensors, smart lights, smart entry locks, motorized window shades, and lots of other devices that use the same protocols. Some smart home devices use Bluetooth, but all the routers with Bluetooth radios that we’ve seen so far use that protocol only for initial router setup.

Features to consider in a Wi-Fi router

You’ll encounter a thicket of jargon when you shop for a new Wi-Fi router. We’ll explain some of the most common terms you’ll encounter (in alphabetical order).

A mesh-network router that supports AP steering will automatically direct its wireless clients to connect with whichever access point (AP) offers the strongest connection back to the router (and thus to the internet).

The side of a network that carries data packets back to the router and out to the internet. Some tri-band mesh Wi-Fi systems, including the Netgear Orbi and Linksys Velop, dedicate an entire wireless network to backhaul. You can also set up wired backhaul by connecting the access point to the router using an ethernet cable, but that would require drilling holes in your walls and pulling the cable through, a job most people are reluctant to tackle.

A router with this feature can detect if a client device is dual-band capable (i.e., the client is outfitted with a Wi-Fi adapter that can operate on either the 2.4- or 5GHz frequency bands). The router will automatically push dual-band clients to connect to its least-congested network, which is usually the one operating on the 5GHz frequency band.

An optional feature of the 802.11ac Wi-Fi standard that improves wireless bandwidth utilization by focusing the radio signals so that more data reaches the client and less radiates into the atmosphere. Click here for a more in-depth explanation of beamforming.

A dual-band Wi-Fi router operates two discrete networks, one on the 2.4GHz frequency band and a second on the less-congested 5GHz frequency band. Some types of tri-band routers split the 5GHz frequency band, using one swath of channels available in 5GHz spectrum to create a second network, and another swath of channels in that spectrum to operate a third network. Other tri-band routers operate discrete networks on the 2.4- and 5GHz bands, and a third network using spectrum available on the 60GHz band, though this technology has fallen out of favor recently.

A router must have at least two hardwired ethernet ports (either 100Mbps or gigabit per second). One (the WAN, or wide area network) connects to your broadband gateway (a cable or DSL modem, for instance). The other (a LAN, or local area network) connects any hardwired client. Some mesh Wi-Fi routers have auto-configuring ports that become WAN or LAN based on what gets plugged into them. You can increase the number of ethernet ports available on your network by plugging an ethernet switch into one of the LAN ports.

Mesh Wi-Fi access points typically have two ethernet ports, so they can serve as a wireless bridge for devices that don’t have their own Wi-Fi adapters. Alternatively, you can use one of the AP’s ports for data backhaul using an ethernet cable that’s connected to your router at the other end.

This is a virtual network that gives your guests access to the internet while blocking access to your own computers, NAS boxes, and other network clients.

In a hub-and-spoke network topology, each wireless access point exchanges data packets directly with the router. A wagon wheel makes for a good visual metaphor here. In a mesh network, wireless access points that are distant from the router can exchange data packets with their closest AP neighbor until the packets reach the router (and vice versa). In this instance, you might visualize a fishing net; or perhaps abstractly, a firefighter’s bucket brigade.

The acronym stands for multiple user, multiple input/multiple output. MIMO describes a method of sending and receiving more than one data signal using the same radio channel. This is accomplished using a technique known as spatial multiplexing. In its original implementation in routers, client devices had to take turns communicating with the router, round-robin style. The switching happens fast enough that the interruptions are imperceptible, but it reduces the overall transmission speed. This is known as SU-MIMO (single-user MIMO). As you’ve probably guessed, MU-MIMO lets multiple client devices communicate with the router at the same time without interruption, significantly increasing transmission speed. Both the router and the client must support MU-MIMO for the scheme to work.

The internet can be an unpleasant and even dangerous place for children to visit. Router-based parental controls promise some protection by restricting where a person can browse and what they can do while they’re online. Such controls can also restrict the hours that a device is allowed to be online—at least while the device is on that router’s network. Methods and practices—and effectiveness—vary widely. I’ve yet to see a system that’s better than just having an open and frank dialog with your kids, but that’s just my opinion.

This concept describes a router’s ability to identify different types of data packets traveling over the network and then assign those packets higher or lower priority. You might want your router to give network traffic such as streaming video or VoIP (Voice over Internet Protocol) calls higher priority than file downloads, for example, because the former don’t tolerate interruptions. Waiting a little longer for a file to download is vastly preferable to watching a glitchy video.

Vendors commonly market their 802.11ac routers (and 802.11ac Wi-Fi client adapters) by combining the throughput numbers for each of the router’s networks. A dual-band router capable of delivering 400Mbps on the 2.4GHz frequency band and 867Mbps on the 5GHz frequency band might be described as an AC1300 router (rounding up from 1,267, naturally). You’ll never experience 1,300Mbps (or even 1,267Mbps) of throughput, of course, because it’s not possible to bond the 2.4- and 5GHz networks together. But the classifications at least provide a point of comparison.