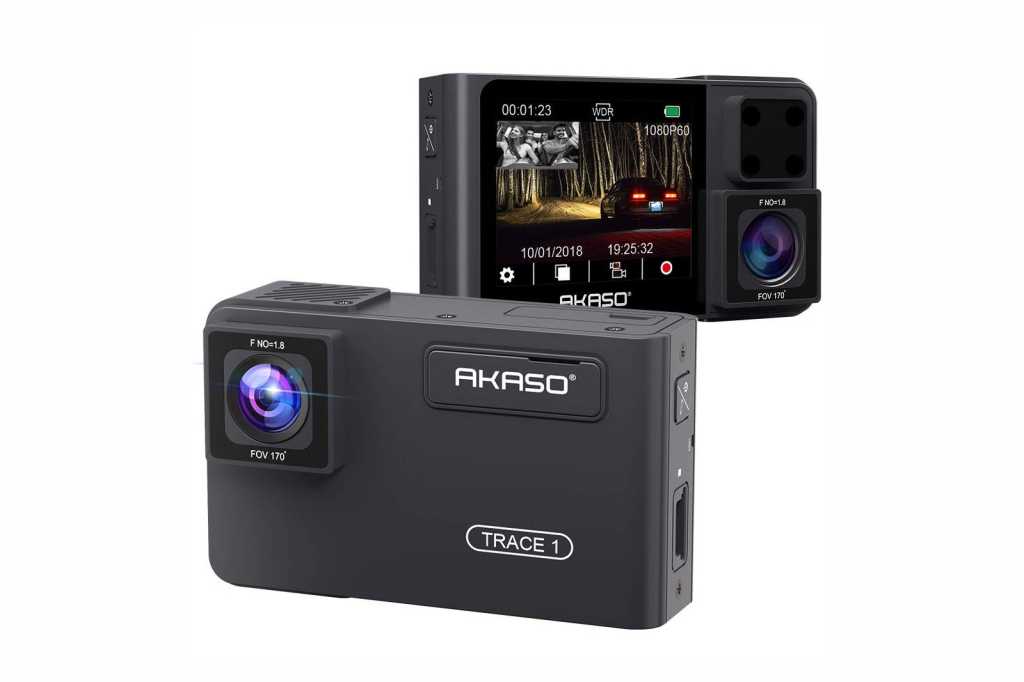 Akaso
At a Glance

The Trace 1 is designed with ride-giving pros in mind. The 170-degree lens captures action to the side, and infrared lighting makes sure interior captures are detailed even at night.

If you’re looking for an affordable dash cam for your taxi, Lyft, or Uber work, then Akaso’s $100, wide-angle Trace 1 is a good choice. It takes front and interior video, with infrared interior lighting for night time use. It’s also solidly built and easy to use.

The Trace 1 measures approximately 3 x 1.75 x 1.25 inches. It’s relatively light, and has a whopping three ventilation ports to dissipate heat. There’s an on/off button and SD card slot (up to 128GB) on the left, and four action buttons on the bottom of the unit. The buttons vary in function, turning things on and off while recording is taking place, or navigating the settings menus when recording is off. I prefer being able to change settings while recording, but that’s a minor gripe.

Akaso provides the unit with a suction mount with a rotary knob to extract the air. It sticks very, very well. So well, in fact, that the first couple of removals required a pry tool. It eventually became easier. It also took me a minute to find the attachment point on the camera, as it was hidden by a rubber plug with the Akaso logo on it. It really looks like part of the camera until you peer closely. Note that the mount only adjusts horizontally through the orientation of the suction cup. Make sure it’s aligned properly before you finish twisting the rotary knob.

I was sure that when I first saw the name that the Trace 1 would have GPS. It doesn’t. Sigh. It takes great video, but GPS info is handy to document your location both during an accident, and on trips. At least the option would be nice.

The 170-degree field of view cameras support 1080p at 60 frames per second if you’re only using the front, or 1080p at 30 fps if you’re using both the front and interior. If you’re loop recording (overwriting the previous video every three to ten minutes), this is nice. Unfortunately, there’s no way to select only the front camera at 30 fps, so you’re going to use about a gigabyte of storage for every six minutes of video no matter what. For traveling or other documentary purposes, it would be nice to have a front-only 30 fps option. (And GPS)

You’ll really want this document, as there are tidbits such as warning against using a regular USB charger to charge the Trace 1’s 20-hour battery, as you might damage it. I did exactly that in the office to investigate the user interface without sitting in the car. Darn. It didn’t seem to damage the device, but don’t hold me up as an example.

I was more than happy with the quality of both the day and night video captured by the Trace 1’s forward camera, as well as the black-and-white imagery captured by the interior camera. Note that any of the streaking you see below is my fault—I tend to grab the cameras at the lens and smudge it up without noticing.

The Trace 1’s daytime captures are top-notch, with nice contrast, detail, and color, but 60 fps video is generally overkill and uses a lot of storage. There’s a bit of fish-eye because of the 170-degree lens. I’ve seen worse, but it’s still not the camera for capturing scenery.

The early evening capture below is included to show a driver who thought it would be clever to drive the wrong way up the one-way street I was coming down.

Though there are streetlights around, this is still a rather dark area. The streaking is largely my fault. Sorry, Akaso.

Interior video, as shown below, is grayscale thanks the infrared, but shows quite a bit of detail and the coverage of the front seats is more complete than many other front/interior dash cams. It’s certainly good enough to document any passenger hijinks if you’re a professional driver working the late shift.

The capture below shows off the Trace 1’s night video, and it demonstrates another advantage of using a battery rather than a short-lived super-capacitor. (This was taken while walking home from the car, so no, I wasn’t driving on the sidewalk.)

Though the battery will run for roughly 20 hours in parking mode after a 3-hour charge (or take about 20 minutes steady of video), you might consider grabbing an always-on OBD power cable to replace the included auxiliary (cigarette lighter) cable if you want to utilize the camera’s parking surveillance mode for any greater length of time.

The stated temperature operating range for the Trace 1 is -4 to +158 degrees Fahrenheit. I barely noticed any heat from the camera (thanks to the aforementioned venting no doubt), so I’m inclined to trust it.

Great for professionals, not for travel

Purely for documenting incidents inside or outside the car or parking surveillance, the Trace 1 is a great dash cam. That’s what it’s designed for, and I can easily recommend it in that role. But the 170-degree lens and heavy storage requirements limit its usefulness as a documentary dash cam or travel partner.

Note: This article was updated 07/19/19 to note the Akaso’s superior coverage of the front seats at night.