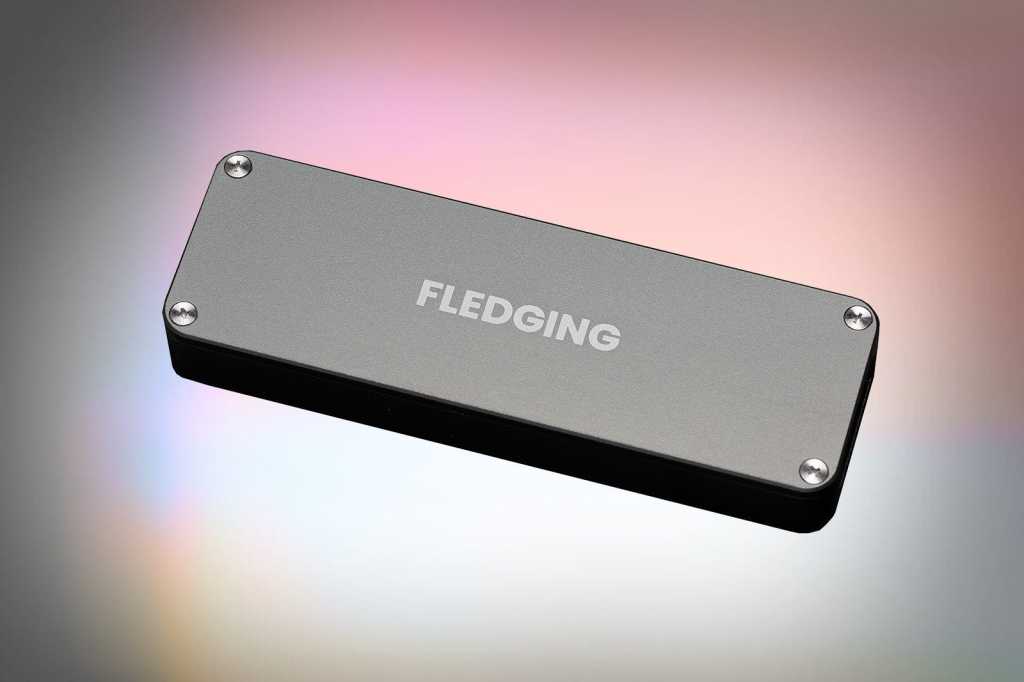 Fledging
At a Glance

If you want the best possible speed from your external USB 3.1 gen 2 storage, then the Fledging Shell delivers. It’s solidly constructed and despite its diminutive size, fan-cooled, which makes it suitable for intensive operations.

The Fledging Shell is a small but solidly engineered enclosure that lets you leverage M.2 NVMe SSDs for increased performance. USB 3.1 Gen 2 (10Gbps) is capable of more speed than SSDs such as Samsung’s T5, Sandisk’s Extreme SSD and others deliver. Internally, those drives still utilize the older SATA protocol, which maxes out at around 450MBps in real world transfers—well below Gen 2’s theoretical limit.

The Shell provides a nice boost over the competition, but alas, also exposes USB 3.1’s limits. It’s hardly slow, but Thunderbolt it ain’t.

You can also buy the unpopulated enclosure for $65 and add your own NVMe SSD. If you have one lying around, that’s super-handy.

I was impressed with the solid construction of the 4 x 1.3 x 0.6-inch thick Shell. It’s hefty enough that it could easily be used as a throwing weapon if someone’s trying to heist your goods. Opinions vary, but I like heft. It’s reassuring in the hand and easy to find in the pocket.

Removing the tiny screws using the thoughtfully and wisely provided screwdriver revealed high-grade tapping (the creation of the hole with threading) and quality internals as well. There’s a single M.2 slot, and add get this—an actual fan inside.

Color me surprised, and impressed. The fan kicked in once during testing and it moves a lot more air that I would’ve thought possible from something so tiny. One of my complaints about sealed units is that they run pretty hot under heavy use. You could easily do video editing from the Shell without fear of overheating or thermal throttling (reducing performance when overheating is imminent).

The performance of the Shell will vary from computer to computer, especially as some older implementations of USB 3.1 Gen 2 were lacking in the performance department. And as always, there was some disparity between the benchmarks and real-world performance.

Our tests were done with an Ablecomm x4 PCIe USB 3.1 Gen 2 adapter card on the PC, with the drive reformatted to NTFS instead of the default exFAT. exFAT is as fast with large files as NTFS, but is considerably slower with small file writes. Expect slower performance if you leave the Shell (dark purple) formatted that way.

CrystalDiskMark 6 measured the Shell/WD Black SN750’s performance as nearly twice that of the SATA-based competition.

While the seek times (shown below) weren’t up to NVMe-over-PCIe standards, they were clearly better than that of the SATA-based competition.

Real world copy tests also showed a clear advantage for the Shell USB 3.1 over other SATA-based drives. However, at no point did copies proceed a much faster than 600MBps, so don’t expect the 1GBps transfers that the synthetic benchmarks hint at.

As Fledging is primarily a Mac vendor, we also ran Blackmagic’s Disk Speed, with similar results to the Windows-based synthetic benchmarks.

If you want to write to the Shell using both Windows PCs and Macs, leave it formatted to exFAT or perhaps visit Paragon Software for Mac Toolbox.

As you’ve seen, NVMe adds a nice little performance boost to the USB 3.1 mix. However, it’s not doing the WD SN750 justice. You might do just as well with a cheaper x2 PCIe NVMe SSD. Also, just because you have a Type-C USB port, doesn’t mean you have USB 3.1 Gen 2. If you have one of the common 3.x Gen 1 ports, you’ll derive little or no performance benefit from the Shell over SATA-based drives.

Other NVMe to USB 3.1 Gen 2 adapters can be had for a bit less, but Fledging’s Shell is so well thought-out and constructed, I don’t really care. It’s best of breed, and the company is also easily reachable for tech support should you have issues. Not something you can say about all your eBay and Amazon vendors.