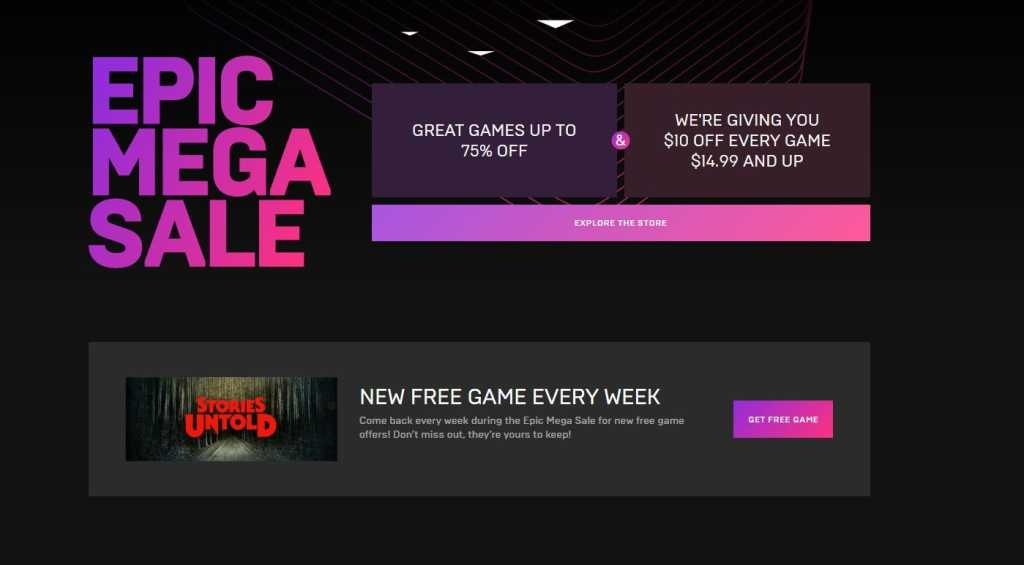 The Epic Games Store is holding its first sale since it launched last December, and it’s both a) complicated and b) generous. Why? Well, it’s actually two sales stacked on top of one another. “Great games up to 75% off” is the first part—fairly standard. “$10 off every game $14.99 and up” is the second, and yes, the deals are cumulative.

It’s Epic’s latest play at luring you into the Epic Games Store. Exclusive titles like Metro: Exodus, Ashen, The Walking Dead – The Final Season, and Hades all have nominal discounts under the “Up to 75% off” umbrella. And I do mean nominal, for the most part. Metro for instance is discounted by…$5. That wouldn’t normally be enough to stand out.

But, and this is the weird part, Epic then adds a second $10 discount on top, courtesy of that Fortnite money. Anything—and I do mean anything—in the store above $15 gets an automatic $10 off, including games that haven’t even released yet. The Sinking City doesn’t release until June, but it’s $10 off here. So is Borderlands 3, and the intriguing tactics game announced last week John Wick Hex, and Remedy’s new game Control.

As a consumer it’s a cool move, though I do worry a bit that it further contributes to the race-to-the-bottom or wait-for-a-sale mentality that’s already pervasive in the games industry. The discounts aren’t coming out of the developer’s pockets, but it still cheapens their products regardless. I’ll be curious whether any developers speak out against the practice.

You can’t get cheaper than free though, and that’s Epic’s last big deal this sale. While the Epic Games Store has given away free games every two weeks since launch, during the Epic Mega Sale it’ll boost that to a free game per week. As planned, the first offering is the excellent lo-fi horror game Stories Untold, which made it onto our Game of the Year list in 2017. (The studio’s next game, Observation, releases next week.) The sale runs through June 13 though, so expect three new free games before it’s over.

And if you hate Epic and everything the Epic Games Store stands for? Well, the Steam Summer Sale dates leaked yesterday. It’s reportedly planned for June 25.