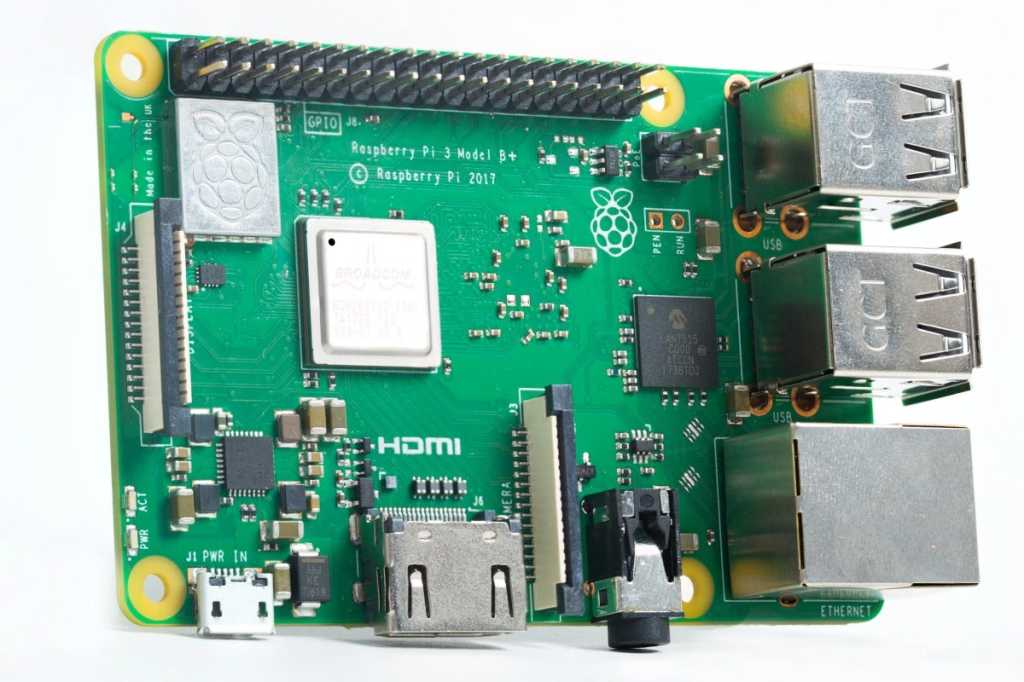 The Raspberry Pi model B continues to improve with every release, and the Raspberry Pi 3 B+ is no different. This version of the Pi adds a better processor, improved Ethernet and Wi-Fi, and it’s power-over-Ethernet (PoE) ready. We’d like to see this version add a little more RAM, but this is an excellent little mini PC that can even stand in as a quick-and-easy PC solution for young students.

The Raspberry Pi mini computer just keeps getting better. It’s been three years since we reviewed a major upgrade to the Raspberry Pi line, and it was worth the wait. If you’ve been wondering if the Raspberry Pi 3 B+ is a worthwhile upgrade let me answer that with an emphatic yes.

Once again, we’re seeing a noticeable jump in performance compared to the Raspberry Pi 3 Model B that we looked at in early 2016. Some of the downsides of the Raspberry Pi still exist with the Pi 3 B+. Nevertheless, if you’re looking to tinker with hardware, start programming, or just create an everyday PC for very basic needs, the Raspberry Pi 3 B+ is an excellent choice.

Hardware hacking is a major focus of the Raspberry Pi, but as this is PCWorld we’ll mostly concern ourselves with how Raspberry Pi functions as a PC. That can mean acting as a basic desktop machine, a home theater PC (HTPC), or a tool for learning how to program.

The board we’re reviewing here was produced by RS Components and Allied Electronics.

On paper, the hardware for the Pi 3 B+ isn’t that different from its predecessor. There isn’t any extra RAM, the GPU is the same, and the processor’s clock speed made a small jump. And yet, the Pi 3 B+ performs far better than previous boards.

The biggest difference between this model and the Pi 3 B is the 200MHz boost in processor speed. This version also adds a shiny new heat spreader, which helps reduce throttling and maintain that speed boost. It also adds a little “chrome” to the board, as does the new shielding around the wireless circuitry (the little metal box with the Raspberry Pi logo on it).

Beyond the speed boost and new look is the same underlying CPU architecture. The RAM also hasn’t changed, and here I really think the board is missing something. Perhaps upping the RAM to 2GB has technical or cost issues we’re not aware of, but it’s high time this board added a little more volatile memory to the overall package.

The Bluetooth connection gets a point upgrade to 4.2, and the networking capabilities add dual-band Wi-Fi. The ethernet port is also faster, with two to three times better performance over its predecessor, but don’t say the “G” word. Raspberry Pi’s introductory video for the new board says this is not true Gigabit ethernet. While the physical component is a Gigabit port, it’s connected to the board over a single USB 2.0 bridge, limiting the theoretical maximum throughput to 300Mbps.

There are also a few changes that will matter more to hardware hobbyists than anyone looking for a cheap HTPC or retro gaming console. It’s Power-over-ethernet ready, but you’ll need to buy the HAT module, sold separately. Finally, there’s a new power management integrated circuit (PMIC) that replaces the discrete components for a smoother power draw.

Since the introduction of the Raspberry Pi 2 model B in 2015, the RPi has been rocking four USB ports, meaning you can connect a good number of peripherals when necessary. With the Pi 3 B+, however, some users may find that a USB hub with an external power source would be a better option.

This device is serious about its power needs, and a hub can alleviate that. The days of getting by with whatever old phone or tablet charger you have lying around are long gone. If you don’t have a 5V/2.5 amp wall charger, then you aren’t going to see the new Pi perform up to snuff—you could even have some issues with data loss. Most phone and tablet chargers output 1 or 2 amps at most, which is simply not enough for the Pi 3 B+.

Users on various forums claim that a 5V/2.4 amp charger will get the job done, but we haven’t tested that. For our tests, we used a 5V/3.0 amp charger, and it did a fantastic job.

We took this board through the usual set of synthetic benchmarks and browser tests to give you a sense of how it performs.

For our tests, we loaded up the Raspberry Pi with the latest version of the Raspbian Stretch build—released in April 2019—at this writing.

Our first benchmark was Sunspider 1.0.2 using the built-in Chromium browser. Last time we tested this JavaScript benchmark with the Epiphany browser, which was the default at the time. Lower results are better in this case, and as you can see the Raspberry Pi 3 B+ smoked its predecessors.

The Octane 2.0 test was a little closer with the Pi B+ only improving upon its predecessor by 352 points. An incremental improvement for an incremental upgrade.

Next up we took a look at the Pi 3 B+ with sysbench. As with our previous tests for Raspberry Pi hardware, we tasked the Pi 3 B+ to calculate all prime numbers between 0 and 20,000 using a single processor thread. The Pi B+ was able to complete the task nearly three minutes faster than its predecessor.

Similarly, when we allowed the mini computer to use all its processing power, it completed the same task in 82.2932 seconds—a full 41 seconds faster than the Pi 3 B.

The Raspberry Pi is a powerful little computer for its size and cost, but it takes a lot more than just the board to make a PC. You’ll also need a mouse, keyboard, and display to make it all work. On top of that, you’ll need a microSD card loaded with the aforementioned Raspbian operating system or another OS such as LibreELEC for media streaming or Retropie for classic gaming.

The easiest way to install Raspbian is to use the Noobs installation tool, alternatively you can flash the Raspbian disc image to a microSD using a third-party app such as Etcher.

Raspbian with the Stretch desktop interface makes the operating system very usable, especially if you choose the version of Raspbian with recommended software. This includes the LibreOffice suite, VLC, a ton of tools to learn and practice programming, the Chromium web browser, and Minecraft Pi Edition.

That said, there are still some issues in day-to-day use with Raspbian. I spotted some unnatural-looking, almost choppy movement in YouTube videos at times. This is a common problem with all Raspberry Pi devices and likely due to its limited power draw. Watching Netflix also isn’t an easy achievement on Raspbian. Having multiple browser tabs or windows open at one time can be a real problem, but like video streaming that’s to be expected. Playback for local videos is fantastic, however.

Minecraft Pi is very basic, and for what it is it’s great; however, if prospective Raspberry Pi users are accustomed to playing on PC (Java or Windows 10) or console, this version will not appeal.

Raspbian also has an app catalog of sorts where you can download and install other programs, but It’s not the best experience. The buttons aren’t well labeled, and at times they didn’t seem to work. A better approach would be to learn how to install programs from the terminal using the built-in package manager, APT. The command line seems scary, but it’s fast and easy once you learn the few basic commands needed to get things done.

For $35, and the addition of a few peripherals many people already have lying around, you can put together a nice little basic-needs PC for the kids, an entertainment console, or a classic gaming machine. I’d highly recommend the Pi 3 B+ for any budding programmer, because it has all the tools necessary to get started.

For elementary and perhaps even middle school students the Raspberry Pi 3 B+ is up to the task as a daily driver for homework and basic web surfing—especially if you buy a case to go with it. Anyone beyond that age will likely be disappointed with the Raspberry Pi as an everyday desktop.

That’s not all a Raspberry Pi can do by any stretch, as we’ve seen some insanely innovative Pi projects. Beyond the aforementioned uses, it can also function as a home-based server for everything from Minecraft to chat and home automation.