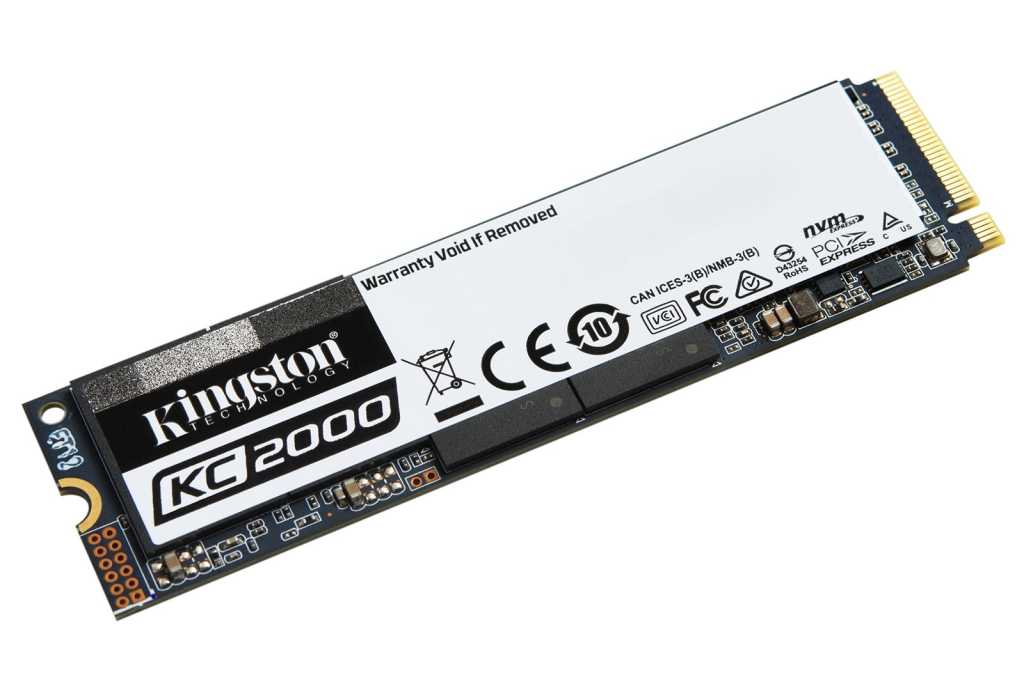 When it comes to affordable, top-notch real-world performance, it doesn’t get any better than the Kingston KC2000. Note that the 250GB model is a slower writer.

I wasn’t expecting much from Kingston’s KC2000 M.2 NVMe SSD, given the last Kingston NVMe drive I tested, the affordable but mundane A1000.  Color me wrong—this latest effort delivers real-world performance that matches anything available, and sets it at your feet for about 20 cents per gigabyte. Sweet. Super sweet.

The KC2000 employs 96-layer TLC (Triple-Layer Cell/3-bit) NAND and a SMI 2262EN controller from Silicon Motion to work what is, as it turns out, some pretty impressive magic. See below.

The drives are rated for 150 Terabytes written (TBW) for every 250GB of capacity, and carry a five-year warranty. Those are merely decent endurance ratings, but I was expecting only a three-year warranty at these price points. Said warranty is, however, at the mercy of a percentage-used figure you can see with Kingston’s SSD Manager utility. At 100 percent, you’re out of warranty. All companies do this; Kingston is simply more up-front about it.

The good news is, it’s highly unlikely that you’ll ever approach that 100 percent unless you stick the drive in a high-use server—something it’s not designed for.

While the CDM and AS SSD numbers aren’t as gaudy as those I’ve seen from some of the top-rated SSDs, the real-world performance of the KC2000 is as good as it gets. In fact, the KC2000 proved the fastest drive ever in our 48GB read/write tests. Though it was by a relatively small margin (7 seconds total), it was faster than the Intel 905P, Samsung 970 Pro, and Adata SX8200 Pro, not just other budget drives.

Not quite convinced, I patiently sat through a 450GB write to see only a slight drop-off in performance to 1.3GBps. Many NVMe SSDs start slower than that and drop even lower, including the Adata SX8200 Pro. Only the mighty Samsung 970 Pro is comparable. To put it bluntly: Kingston aced it with this drive. You can see the numbers below.

During 4K writes, the KC2000 is great with the single-disk access thread that most situations demand, though it’s not the drive you’d want in a multi-tasking file server.

As you can see below, the KC2000 is ace during all sorts of long reads and writes. Faster than the fastest competition with smaller files.

The Kingston does slow down during long transfers—but only to a still-impressive 1.3GBps.

Note that these tests were done with the 1TB drive that Kingston provided. According to the data sheets, you’ll get only about half the sustained write performance from the 250GB version, with slightly slower 4K writes. The 1TB version is also slightly faster with short writes than the other capacities.

The worst NVMe SSD is hard to tell from the best, until you start copying large amounts of data. And that’s where the cream, such as the KC2000, rises to the top. It’s nice to see Kingston, a straight-shooter among storage companies, in the driver’s seat with storage again. Highly recommended.