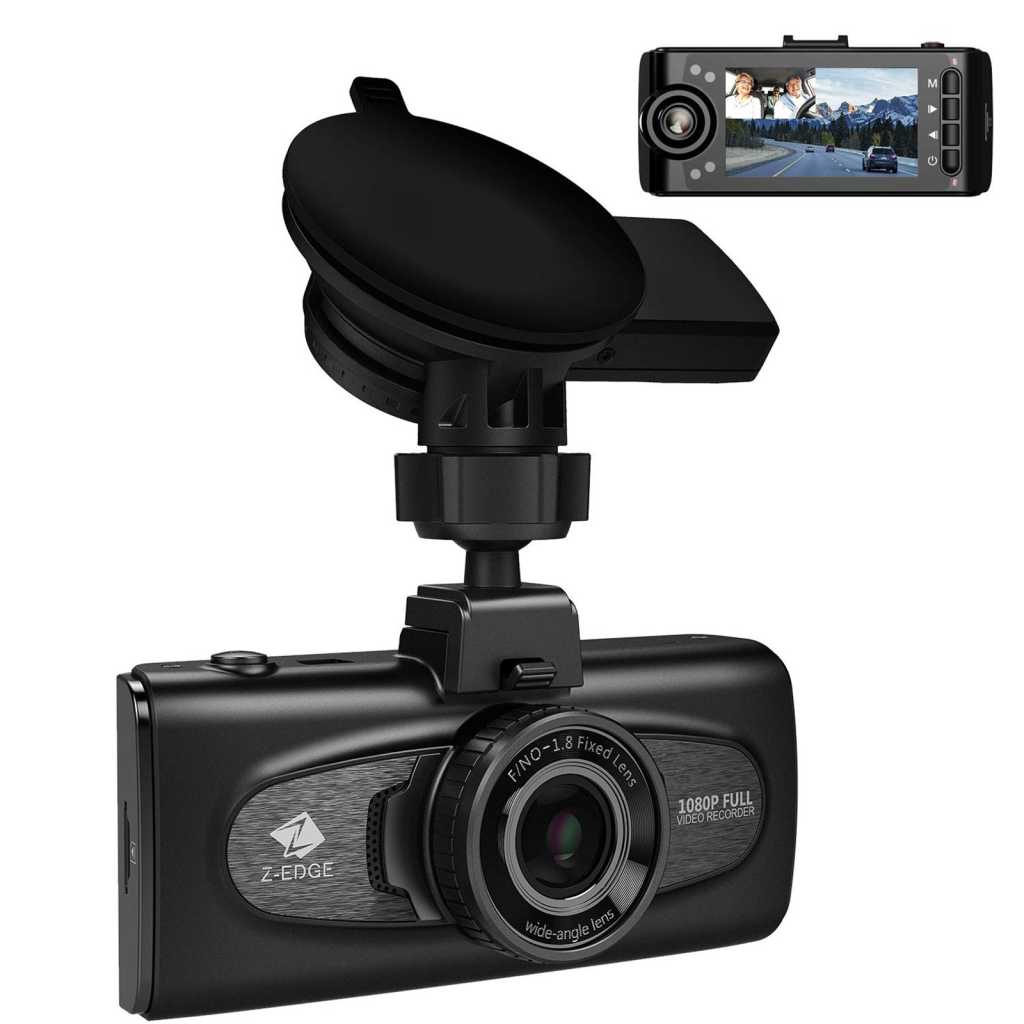 The Z-Edge F1 takes great video and comes with GPS integrated into the mount, plus GPS info is watermarked and embedded in the video to be played back with the downloadable map player. Its button interface is initially a very frustrating experience, but it’s still one of our favorite dash cams.

The $170 Z-Edge F1 ticks nearly all the boxes a front/interior dash cam should tick, especially for professional and rideshare drivers. Boasting 1440p front video, 1080p front/interior video, good night and low-light captures, and GPS, it’s almost the total package—once you figure out how the heck to use it.

The F1 is a wide-body camera, measuring approximately 4.25×1.75×1.35 inches. It’s handsome as dash cams go, with a suction mount that also incorporates the GPS module. Nicely, the GPS module serves as a handle that rotates to aid the removal mechanism. If you’ve used a high-suction model that relies on only a rotary dial, you’ll appreciate how much easier it is.

The back of the unit is home to a 2.7-inch 1080p display, with four buttons stacked vertically on its right. There’s another button on top, next to the mini-USB connector, and a SD card slot on the right of the unit. The interior camera is to the left of the display, in an eyeball socket.

The front camera can capture up to 1440p at 30 frames per second when used by itself, or 1080p (recommended) at 30 fps, as can the interior camera, if both are in use. And unlike the recently reviewed dual-camera Akaso Trace 1, you can choose the lesser resolution when capturing with only the front camera to save storage space. Video is saved in .MOV (QuickTime) format. Both cameras offer a 150-degree field of view.

As with all modern dash cams, there’s a g-sensor to detect impacts, as well as motion detection for use when the car is parked. I recommend a OBD-II power adapter for supplying juice when the car is turned off. I do not know whether the car senses battery drain, so as usual, be careful when leaving the camera on in the car for more than a couple of days.

The F1’s on-screen interface is actually fairly well done, but the button functionality is a hot mess. The confusion starts with the ‘OK’ button on top of the unit, where normally the on/off button resides. Then there’s the ‘M’ button, which stands for Mode, but only changes modes once you stop recording by pressing the OK button. In the user’s guide this is referred to as “stopping recording to go into record mode.” I’m not kidding.

In my initial testing, interior video was extremely dark, and I could find no menu setting to turn on the infrared LCDs. As it turns out, you hold the Left/Up button for three seconds to turn it on. Ahem. Note that I never read the user’s guide unless I have to. That’s one way we judge how intuitive a device’s interface is. I’m calling the F1 a fail in that regard, though once you know what’s going on, it’s workable.

Bottom line: Z-Edge really needs to rethink the F1 interface—it doesn’t measure up to the product as a whole.

The F1’s video turned out to be worth the hassle of learning how to use it. Color is rich, the stabilization is top-notch, and there’s plenty of detail. If I’m being picky, there’s a touch of graininess in the low-light captures. That’s a hallmark of the Sony IMX323 sensor, though it more than compensates by capturing a large amount of detail in the dark.

There’s also just a touch of fish-eye, which is going to be greater with a 150-degree field of view than with the usual 140-degree device, but it’s processed very well. As I said, I’m being picky. Generally speaking the F1’s video is first-rate.

This first shot shows how much detail is revealed in your car’s surroundings by the Sony sensor. There’s some distortion, as well as dirt revealed on what I thought was a clean windshield.

I was so rattled by the experience of trying to configure the F1, that I set the time wrong. That’s my excuse, and I’m sticking to it.

The shot below was taken on U.S 101 northbound near downtown San Francisco.

I’m tired of seeing my face in bad lighting, so the next shot just shows the interior of a Mazda MX-5. You can see plenty of detail when humans are present. The field of the infrared is a bit narrow for the front seats, but covers everything in the back seat of a two-row vehicle.

The F1’s supercapacitor provides about 2 seconds of run time for the camera, which is likely enough to capture all of an event should the 12-volt fail. That’s better than some that immediately shut off the cameras and only last long enough to save the previously recorded video. It would be nicer if the cameras could last 10 to 15 seconds, but 2 seconds is just enough not to get dinged.

The camera generally runs cool, a nice change of pace from some of the tiny units we’ve seen lately. It’s rated for thermal tolerance of minus-4 to plus-158 degrees Fahrenheit.

Great once you’re used to it

Once I got over the frustration caused by the inane button functionality, my opinion of the F1 improved to that point where I have no hesitation in recommending it. I like the the look, the easy-to-attach suction mount, the fact that it runs cool, and the embedded GPS. Great functionality, but really Z-Edge, rethink those buttons.