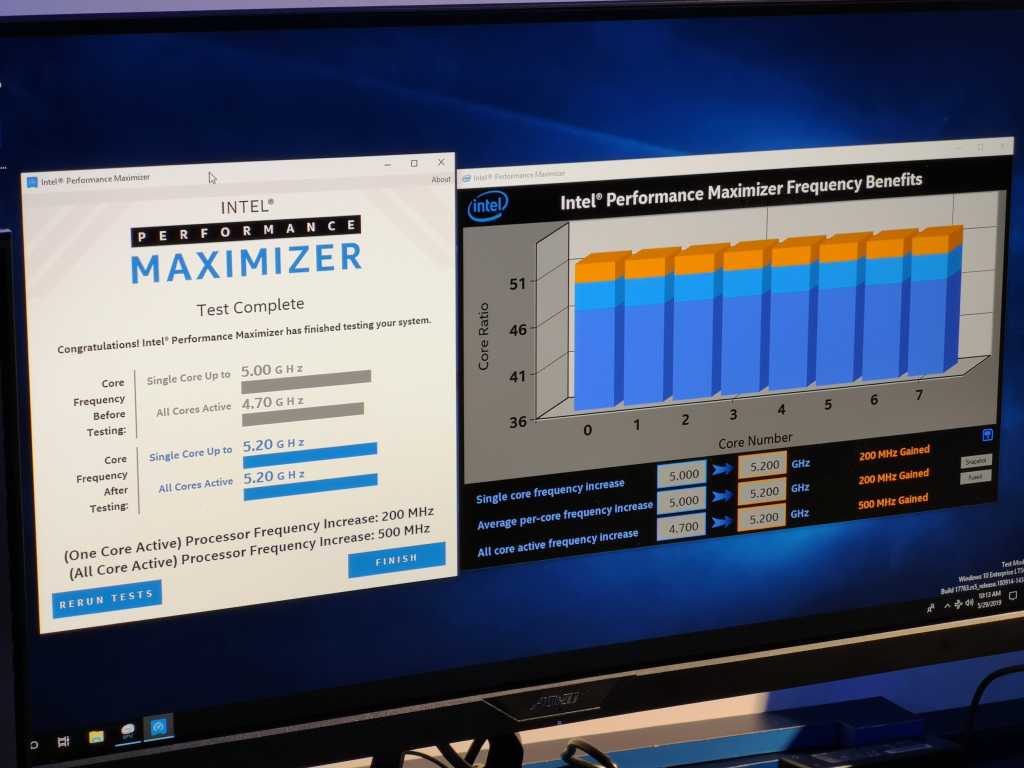 In June, Intel will debut the Performance Maximizer, a one-click software tool that will automatically overclock your high-end PC processor. Also due to return is Intel’s “insurance for overclockers,” the Performance Tuning Protection Plan.

Intel’s Performance Maximizer is designed for newcomers to overclocking, or for people who don’t want to fiddle with manually tweaking voltages and memory timings. The tool, which will live at Intel’s Performance Maximizer page, will only be available for a few processors: the Core i5-9600K, the Core i7-9700K, and the Core i9-9900K. (It will be available for the graphics-less “F-series” versions of those chips as well.)

Intel executive explained how the Performance Maximizer will work. First, you’ll install the software. The tool itself will take some time, though. Running it will reboot your PC into a Linux virtual machine, free of the Windows overhead. The Maximizer will require a couple of hours to run, slowly tweaking the voltage and clock speed as it goes. The tool will slowly scale the clock speed upwards until a thermal threshold is tripped; after that, the tool will stop, reconfigure the Core chip’s clock speed, and boot into Windows.

Executives said that the Performance Maximizer will simply adjust voltage and clock speeds. It won’t tweak memory timings or adjust GPU settings. Doing so would push into other tools, like Intel’s XTU Extreme Tuning Utility tool.

Granted, the notion of auto-overclocking has existed within various motherboard-specific tools for several years now. But Intel’s own tools will make it simpler. The Performance Maximizer sounds somewhat similar to the very helpful Nvidia Scanner technology released alongside the GeForce RTX 20-series graphics cards.

Enthusiasts that decide to overclock will have a safety net in Intel’s Performance Tuning Protection Plan, too. Intel originally launched the PTPP several years ago, as part of the second-generation Core chips. As before, the reborn PTPP will give you one free replacement part if you fry you qualifying Core chip while overclocking.

Originally, the Performance Tuning Protection Plan charged users a one-time fee of about $35. Now, it’s $19.99 for the warranted period, which lasts three years, an Intel spokesman said. Not only is that a substantial discount from the earlier version, but it’s also just 7 percent of the $263 purchase price of the Core i5-9600K.

The implication’s pretty clear: Intel’s happy if you overclock its chips, and it’s offering protection for those who choose to do so. Pricing the Performance Tuning Protection Plan insurance so low, though, tells you that Intel is pretty confident that you’ll be able to safely overclock the Core processors that the new plans protects.