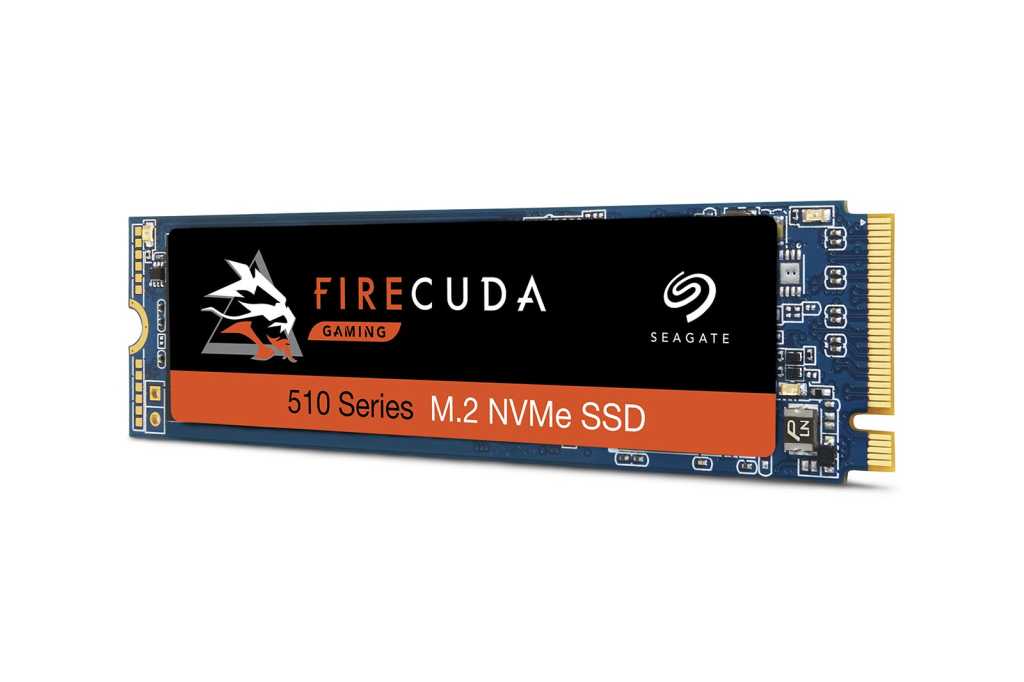 The Seagate FireCuda 510 performs on a par with the outstanding Samsung 970 Pro the vast majority of the time—for considerably less money. That tells you all you need to know.

Seagate ran some pretty impressive performance numbers by me before I had an actual chance to test the company’s new FireCuda 510 NVMe SSD. I’m happy to report that the drive lived up to the hype and then some—except for one test that has us scratching our heads.

The FireCuda 510 is a 2280 (22 mm wide, 80 mm long) M.2 NVMe SSD that can make full use of the x4 PCIe generation 3 (8Gbps). The next generation of 16Gbs PCIe 4.0 products were announced at Computex, which may alter the equation a bit for early adopters and other bleeding-edge NVMe SSD purchasers. Look for an article on that soon.

The FireCuda 510 uses 64-layer 3D TLC (Triple-Level Cell/3-bit) NAND and ships in $230 1TB and $400 2TB flavors. There’s 1MB of DRAM cache for every 1TB of memory, and the drive also employs some of the TLC as SLC for secondary caching. Nicely, the drive carries a five-year warranty and is rated for a very generous 1300TBW for every 1000GB of capacity. Any time the TBW (TerraBytes Written) rating exceeds capacity (times 1000), it’s a very good thing.

The FireCuda 510 absolutely aced CrystalDiskMark 6 and AS SSD, and did very well in all the copy tests. In fact, it scored the highest of any drive overall and for writing other than Intel’s 905P, a super-expensive Optane drive.

However, there was one slowdown to about 1GBps during the 48GB single file write test that stumped us. This is usually an “Aha! It ran out of cache.” moment that’s mirrored when we write 450GB to the drive. However, aside from two momentary and less significant dips in speed, the drive never slowed down in the same fashion during the 450GB write tests. Go figure.

You can see the phenomenon in the two screen caps below the test results. The gold bars show the FireCuda 510’s performance.

AS SSD 2 thinks the FireCuda 510 is a beast (in the good sense), and it is during everyday performance.

As you’ll see below, the FireCuda 510 is better with large groups of small files than with single large files, though it’s not too shabby with those either.

The FireCuda 510 dipped to around a 1GBps transfer rate at the 30GB mark during our 48GB single file write. It stayed there, but look at the next screen cap.

When given an even larger 450GB file to write, FireCuda 510 dipped from its normal 1.8GBps performance only a few times, but it was much later in the process and not permanently.

My best guess about the performance dips is that Seagate, like other companies, is employing some sort of smart algorithm to determine how much of the TLC should be treated as SLC, or possibly MLC. That is, writing one bit or two bits to the cell rather than the full three each cell may contain. Writing fewer bits means much faster write performance.

Whatever the explanation, while there’s a dip in the short copy, I can’t say the FireCuda 510 isn’t good for long writes. Especially when the few dips there are remain at or above the 1GBps mark.

A nice competitor for the 970 Pro

For everyday use, the FireCuda 510 is a worthy competitor for the Samsung 970 Pro and especially appealing as it’s considerably cheaper. The odd slowdown in the 48GB copy is apparently transitory and not a major concern, especially considering the drive’s strong result in our 450GB write,. It’s not quite as smooth at the 970 Pro, but close enough. Hence… Highly recommended.