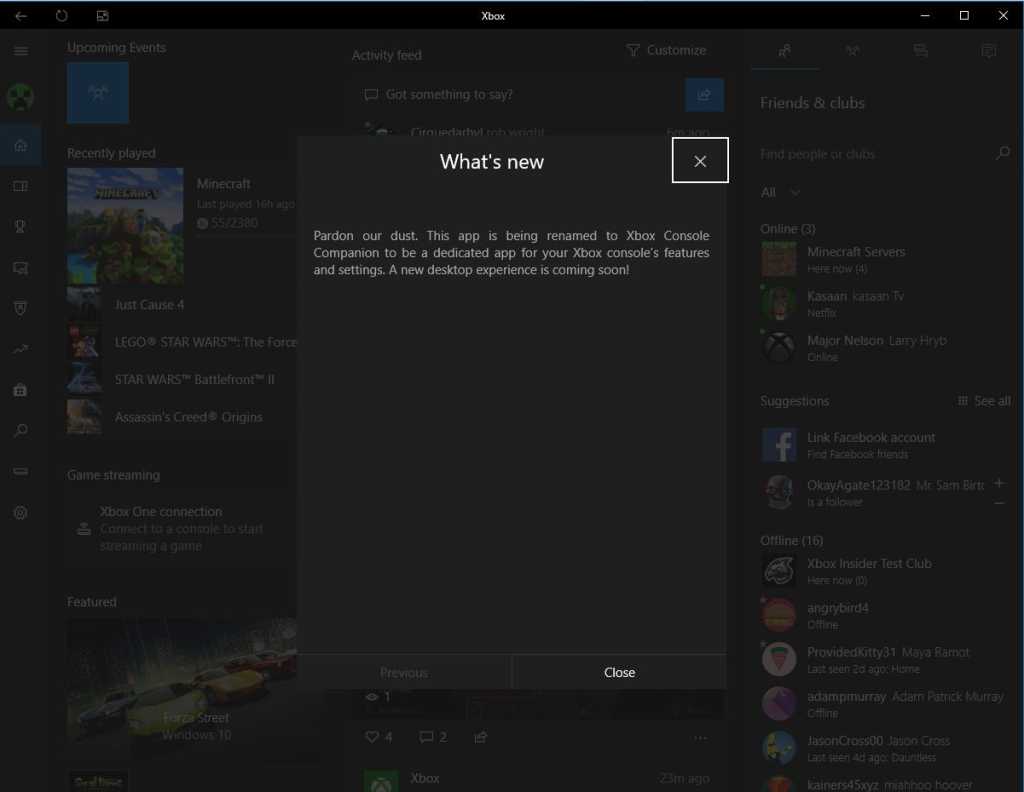 Microsoft will rename its Windows 10 Xbox app as the “Xbox Console Companion,” presumably in anticipation of changes that will be arriving in conjunction with Microsoft’s presentation at E3 this weekend.

If your Windows 10 apps are up to date, logging into the Xbox app will reveal this message: “Pardon our dust. This app is being renamed to Xbox Console Companion to be a dedicated app for your Xbox console features and settings. A new desktop experience is coming soon!”

There’s certainly room for the Xbox Console Companion to take on a greater role in Xbox remote management. Today, you can use the Xbox app to connect to a remote Xbox console and stream games to your PC, and manage its settings—as long as it’s online and connected. But that’s like establishing a remote desktop connection to log into a remote PC, and using that to check your email. It’s far simpler to connect to a cloud-based service like Outlook.com from your own PC. Similarly, managing an Xbox service remotely—so that the Xbox console could be told how to manage games and other settings once it came back online—would be much more useful.

Revamping the app may also be tied to Microsoft’s eventual rollout of xCloud. Originally introduced at E3 2018, Microsoft xCloud takes cloud management of the Xbox to the next level: It actually streams your games from the cloud, substituting the local processing power of your Xbox console for that of a gaming server in Microsoft’s Azure cloud. Microsoft has already indicated that it plans to begin testing this in 2019—a move that will likely require some additional improvements in authentication and network optimization, too.

Microsoft hasn’t said when xCloud will debut. Many believe it will eventually be a service allowing your digitally purchased games to be streamed to remote PCs and possibly even phones. (However, the Android version of the Xbox app does not include the update message about the Xbox Console Companion.)

We should know more in a few days: Microsoft’s E3 briefing will take place on Sunday, June 9, at 1 PM PST.