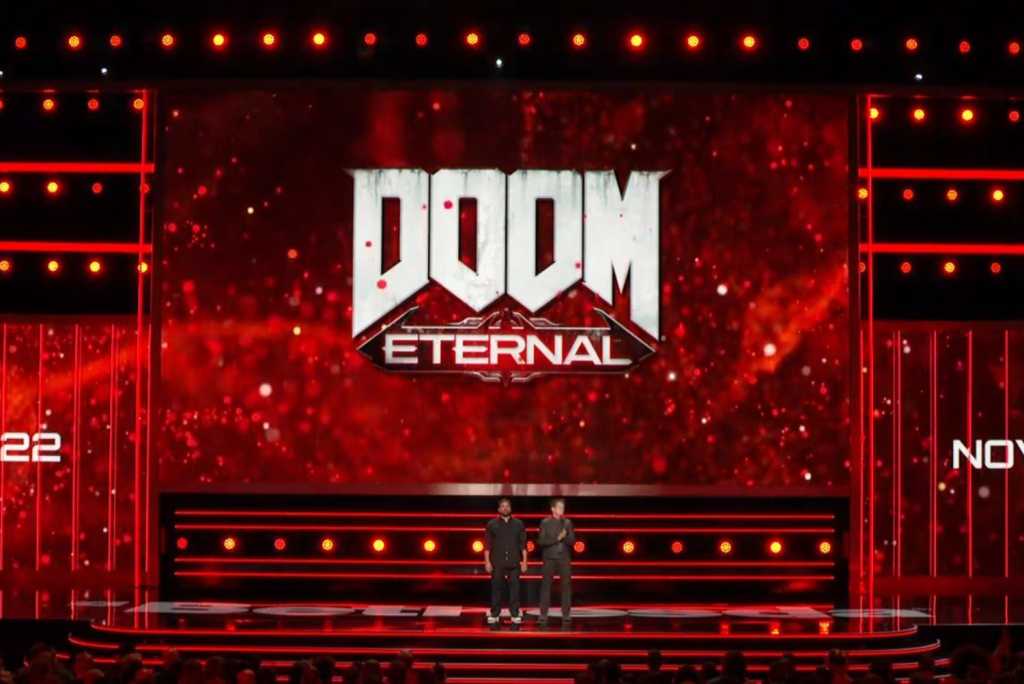 It’s unlikely anyone will top Microsoft’s E3 2019 press conference, given it featured not just an onslaught of games but our first details about next-generation console hardware. Bethesda tried to follow it up in style though, with its fifth annual E3 press conference.

And it’s safe to say they had a lot to prove, coming off the backs of two high-profile games that flopped with critics and players alike, Rage 2 and Fallout 76. With Starfield and Elder Scrolls VI still years away, what could Bethesda possibly fill the time with?

Not a ton as it turns out, though Doom Eternal impressed as always, and new games from Tango and Arkane made for pleasant surprises.

Does…does anyone want to know what’s in store for Fallout 76? Apparently some people do. Todd Howard came out on stage early to apologize for the state of the game’s release, and said “We kept working on it, and you all kept playing it.” All might be stretching it a bit—I certainly haven’t been playing it. But hey, semantics.

Anyway, Bethesda announced a new expansion, Wastelanders. Guess what? They’re adding characters into the game, and quests, and dialog trees. It seems like the Fallout 76 people probably wanted in the first place, to be honest.

You know what, good for them, listening to their users. Maybe they can turn Fallout 76 around, and one day we’ll all reminisce about how disappointing it was at launch. But for the moment I feel pretty annoyed I dumped 30-odd hours into a game that clearly wasn’t finished, only to have the “real” game show up months after the fact—especially in light of Todd Howard saying as much to IGN just last week.

Also there’s a 52-player battle royale mode coming, because of course there is. Throw everything at the wall, see what sticks. If you’re curious to see what all the commotion’s been about, Bethesda’s throwing a free trial week for Fallout 76 June 10 to June 17.

Next, a new project from Tango. It’s not The Evil Within 3, but it does look like there are parallels. Titled Ghostwire: Tokyo, you’re hunting for some sort of spiritual evil in the city that’s causing people to…disappear. It looks a bit Everybody’s Gone to the Rapture mixed with The Evil Within of course, set in some stunning urban scenes, and given how fantastic The Evil Within 2 turned out I honestly can’t wait to play it.

Elder Scrolls Online just released its new Elseweyr expansion like last week, so I didn’t expect much from them at E3. And sure enough, we…got a trailer for Elseweyr. It’s admittedly a pretty damn cool trailer, with a hooded Khajiit stabbing the hell out of a dragon mid-flight. But um, it’s essentially a trailer for a game that’s already out and we’ve already reviewed.

Forget Elder Scrolls Online though. And forget the “Online” part of Zenimax Online as well. The studio revealed a new project tonight, Commander Keen. Yes, Bethesda is resurrecting id Software’s old Commander Keen—but only for mobile devices unfortunately. It’s billed as a Saturday morning cartoon in playable form, and that’s a pretty fitting description for the trailer we saw. Hopefully it comes over to PC the same way Fallout Shelter did, but we’ll see.

Rage 2 once again released a trailer that’s a million times more entertaining than the game itself, this time for an upcoming Rise of the Ghosts expansion. It adds a mech, new cheats, a new enemy faction, a new region to explore, and a handful of new vehicles you won’t use because you’re just using the quadcopter to skip all the empty open-world stuff.

It’s been nearly two years since Wolfenstein II released, which is making Wolfenstein: Youngblood feel like less of an expansion, more of a brand-new entry in the series—especially given the shift to a 1980s setting and the addition of co-op play. Listen, I loved Wolfenstein II and (like VH1) I love the ‘80s so I don’t really need to see more of this to be sold on it. I hope the guns have a bit more punch to them this time, but I expect this will be my favorite game this summer, given its July 26 release date.

A new Arkane project is also cause for celebration. Dishonored 2 was excellent once you got past the PC port issues, and Prey even better. Safe to say Arkane’s one of the most consistent studios Bethesda’s got.

This new game certainly has Dishonored homages, from the Victorian-looking clock towers to the use of a very Blink-like teleport at one point. But it’s got a fresh style to it, more modern, with two characters looking to assassinate each other in a time loop. That makes it time loop game number two for today, what with Annapurna’s 12 Minutes showing up in Microsoft’s press conference earlier. Three, if you count the recent release of Outer Wilds. Looks like we’ve got a new trend on our hands.

Per usual, Bethesda dug deep into one game to close out its press conference. Of course, digging deep into Doom is a bit funny because you play as a character named Doomslayer and uh, very little of the story matters. It did make for some artful shooting though, plus a lot more platforming challenges than I would’ve expected. I’m also excited about the prospect of a grappling hook that yanks you towards enemies, creepy demon tentacles bursting from the floor, and what looks like a zero-gravity environment at one point? That “Demonic Corruption” meter is still hanging out in the top-right corner of the screen as well, still unexplained.

Sure, to an extent it simply looks like “More Doom,” but honestly that’s exactly what I wanted given how 2016’s reboot never got any campaign DLC. Throw in a few new guns, a few new tools, a few new enemies, and I’m all set for the newly announced November 22 release. One odd bit: They’re doing multiplayer again for some reason. I hope it’s better than last time, but honestly I’ll probably never touch it.

Stay tuned for more this week as we delve deeper into E3’s announcement blitz, which is only getting started. We’ll be bringing you coverage of all the major press events and games here at PCWorld.