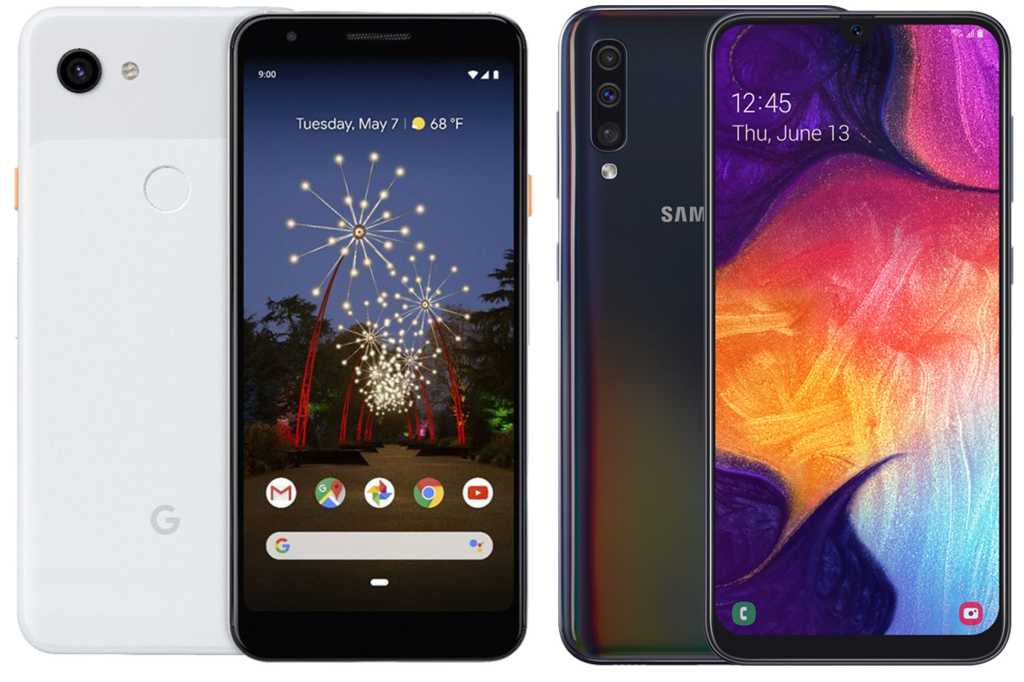 As premium smartphones regularly blast through the thousand-dollar threshold, there’s a new battle beginning among mid-range handsets. Last month Google unveiled the Pixel 3a, which sacrificed speed for stellar photography at an affordable price. Now Samsung is doing the same with Tuesday’s surprise U.S. launch of the Galaxy A50. Let’s take a look at how these phones stack up:

Samsung Galaxy A50 vs Google Pixel 3a: Size and display

If you’re looking for a small phone, the Galaxy A50 isn’t it. Where the Pixel 3a comes in two sizes, the A50 has a single 6.4-inch model, which is just as big as the Galaxy S10+. The A50 uses Samsung’s Infinity-U display, which includes a notch to contain the front camera and the speaker and rounded corners, while the Pixel 3a has a more traditional forehead for the camera and sensors:

However, thanks to a notch at the top of the screen for the front camera and speaker and slim bezels, the A50 is dimensionally smaller than the 3a XL and not much bigger than the 3a:

Design-wise, the Pixel 3a looks very much like the Pixel 3, right down to its two-tone back. Galaxy A50 isn’t quite a Galaxy S10 clone, but it’s a good-looking phone for the price. Instead of a hole, it has a notch at the top of the screen for the front camera and speaker. The bezels are visible but very thin, though there is a decent-sized chin at the bottom. Both phones are made of plastic, but the A50’s shimmery “Prism” paint job gives it a decidedly premium feel.

Samsung Galaxy A50 vs Google Pixel 3a: Processor and specs

As mid-range phones, you’ll find specs that are a step below premium, but not bad at all:

Samsung is using the 10nm Exynos 9610 in the A50, which matches up very well with the 14nm Snapdragon 670, which has a quad 2.2GHz and 1.84GHz cores. In benchmarks, the two chips performs extremely similarly, and each phone should be able to handle most tasks well, especially with OS and app optimizations. Both phones also include a headphone jack.

The 64GB of storage should be enough for all but the most demanding of users. The A50 also includes an SD card slot (up to 512GB). Like the Pixel 3, the Pixel 3a doesn’t include a storage slot.

As far as biometrics go, the Pixel 3a has a standard fingerprint sensor on the rear case, while the A50 includes an optical fingerprint scanner inside the front display. Both phones run their respective versions of Android 9 Pie, and the A50 ships with Samsung’s new One UI.

Samsung Galaxy A50 vs Google Pixel 3a: Battery and charging

On paper, the A50 has a big advantage over the Pixel 3a and 3a XL when it comes to battery life:

However, capacity doesn’t tell the whole story. Google optimizes the heck out of its battery with Android, so real-world use should be roughly the same. Both phones also support fast charging, so when they run out of juice you’ll be able to fill them up in less than an hour.

Samsung Galaxy A50 vs Google Pixel 3a: Cameras

Both of these phones lean heavily into their cameras, though they couldn’t be more different:

To look at them, you’d think the Galaxy A50 runs circles around the Pixel 3a, but hardware has never been the story of the Pixel. Google’s post-processing work is among the best in the business, so photos taken with the single-camera Pixel are often better than those shot with multi-camera high-end phones. The Pixel also includes a few cool tricks, including portrait color pop (which lets you isolate your subject against a black-and-white background) and the insanely cool Night Sight low-light camera. The ultra-wide-angle lens on the A50 is definitely a benefit, but if a good camera is your biggest concern, the Pixel 3a might be a better bet.

Samsung Galaxy A50 vs Google Pixel 3a: Price and availability

The Google Pixel 3a is available now through Google.comRemove non-product link as well as Verizon, T-Mobile, and Sprint stores. The A50 goes on sale June 13 and will be a Verizon exclusive for a limited time:

Samsung Galaxy A50 vs Google Pixel 3a: Conclusion

For the price, you’ll be getting a great deal with either of these phones, but the A50’s $350 price tag really stands out. You’re getting a triple camera, 6.4-inch screen, and giant battery, as well an expandable storage slot.There’s just one huge caveat: Google promises two years of Android updates and three years of security updates, while Samsung offers no such assurances. The Pixel 3a brings an incredible camera system as well. If you want a smaller screen, the Pixel’s an easy recommendation, but otherwise the A50’s price is hard to ignore.