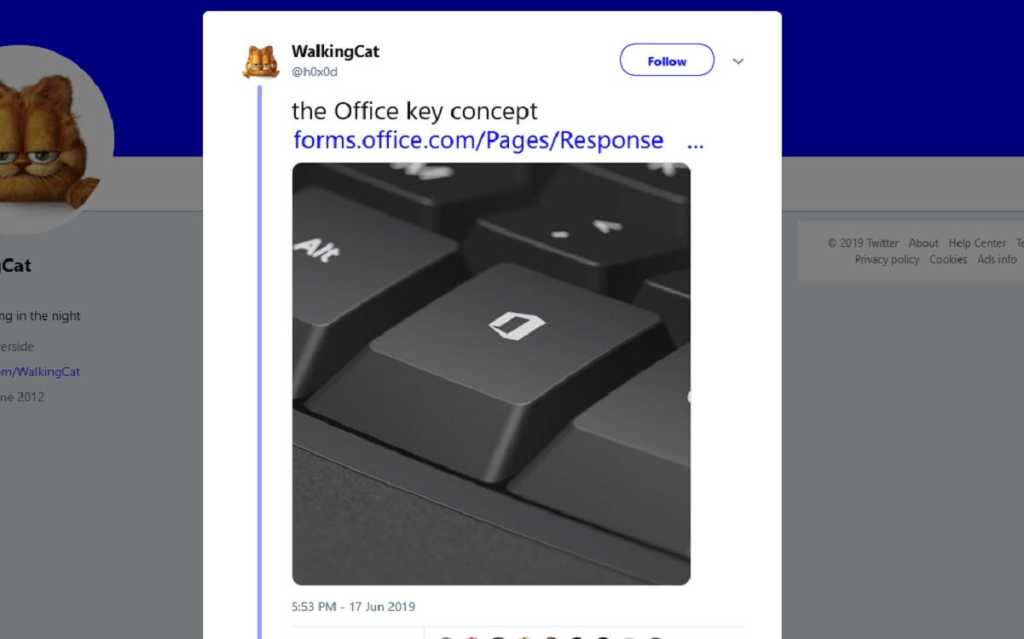 Microsoft has floated the idea of an “Office key” on PC keyboards. Such a move would go beyond controlling the operating system to encouraging use of the company’s Office applications, which typically require a subscription.

Special keys for Microsoft products are an established feature of Windows PCs. Virtually every current laptop and desktop keyboard already ship with a dedicated Windows key for controlling various Windows functions. The Windows key plus the right arrow, for example, snaps the current window to the right side of the screen. In 2015, Toshiba said it would sell its laptops with a dedicated Cortana key to summon Microsoft’s digital assistant, though that feature petered out along with the company’s PC business.

Providing keyboards with a dedicated Office key wouldn’t be too far off. Presumably such a key would offer additional functions specific to Office apps like Word, Excel, and PowerPoint.

Petri.com said it believes Microsoft is preparing to sell its own desktop keyboards with Office keys on them. According to Petri.com, Microsoft internally calls these keyboard Holgate Mid and Holgate Low. Petri.com suggested the keyboards could be introduced at Microsoft’s traditional fall refresh of Surface devices.

Legally, however, an Office keyboard might be problematic. Microsoft has gotten into trouble before about making its products a bit too convenient. In the 1999 United States v. Microsoft case, Judge Penfield Jackson ruled that Microsoft illegally tied the Internet Explorer browser to Windows—a ruling that was eventually overturned on appeal.

The situation with software is a bit different. Each Windows PC ships with a copy of Windows installed, which the user has implicitly requested by selecting that PC rather than a Mac, or a system with Linux installed. PC makers including Microsoft and its partners often bundle trials of software packages.

Laptop makers like Huawei have included dedicated function keys that provide shortcuts to their built-in utility software. Some might see a dedicated Office key, however, as a strategy for promoting a paid Office subscription—especially if the Office key were made a default key for laptops. By selling a keyboard made exclusively for desktops, Microsoft might be able to argue that a number of competitors also offer keyboards without an Office key, providing consumers a choice. For now, the concept of a dedicated Office key isn’t anything to worry about, but it could be looming on the horizon.