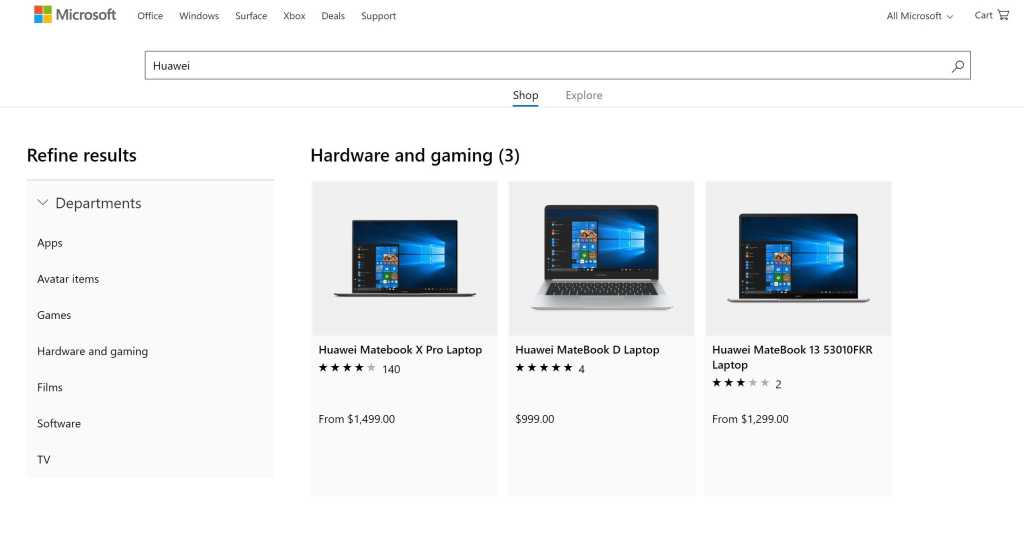 In May, Huawei laptops mysteriously vanished from the Microsoft online store without explanation. Now, in mid-June, they’ve returned.

It’s never been exactly clear how American technology companies are treating Huawei. Fueled by a Trump Administration executive order, Huawei, a leading global smartphone maker, faces being cut off by Android OS supplier Google and other component vendors, including Intel, Microsoft, and Qualcomm. Microsoft, as a supplier to Huawei of Windows updates and other security features, has yet to comment publicly on whether it’s enforcing the ban.

Company representatives did say, however, that what Microsoft is selling in the store is just the “current inventory”. “We have been evaluating, and will continue to respond to, the many business, technical and regulatory complexities stemming from the recent addition of Huawei to the U.S. Department of Commerce’s Export Administration Regulations Entity List,” a Microsoft representative said in an emailed statement. “As a result, we are resuming the sale of existing inventory of Huawei devices at Microsoft Store.”

Even executives at leading technology companies have been close-mouthed, including AMD chief executive Lisa Su, who said last month at Computex that the company was “abiding by the U.S. regulations.” Su never actually confirmed that AMD was suspending sales of its components to Huawei. (Though Huawei is still banned from buying U.S. technology, it has a 90-day reprieve from the Department of Commerce to service existing users dating back to May.)

Huawei reportedly canceled the launch of a laptop at CES Asia following the Trump order, The Information reported. A Wall Street Journal report claims that Huawei could suffer as much as a $30 billion hit from the Trump administration’s decision.

This story was updated at 3:59 PM PT with additional comment from Microsoft.