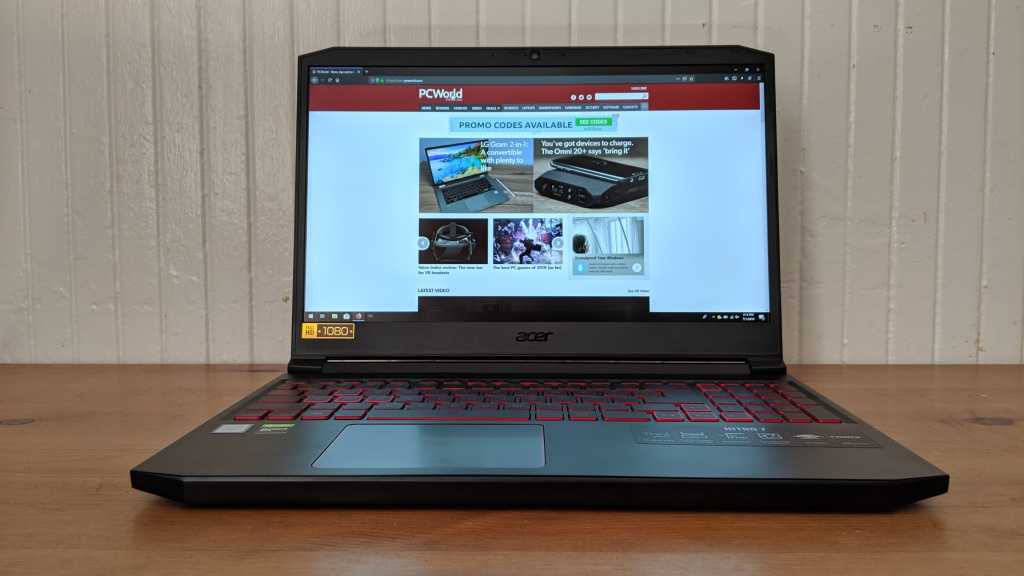 Acer’s Nitro 7 is a competent laptop with some unorthodox priorities, focusing on the display and storage to the detriment of its internal components. It may be perfect for some people, but the majority are probably better off with Acer’s other budget-friendly choices.

Acer’s Nitro 7 is a classic example of how every decision matters when building entry-level gaming laptops. Every component must be second-guessed, every trade-off weighed, because a mere $50 can be the difference between standing out and stalling out. Do you opt for a better screen or more storage space? A better GPU or more RAM? High-end laptops get to have it all, but budget-friendly machines don’t have that luxury.

Trouble is, sometimes you get a laptop that’s perhaps perfect for one niche, but suboptimal for your average buyer. Acer’s Nitro 7 opts for an above-average (for this price point at least) 15.6-inch display, a generous amount of SSD storage, and a top-tier CPU—but it skimps on the graphics card, a fairly important component for a gaming laptop.

It’s an odd choice, and my first instinct is that most people will be better off with a different Acer laptop—namely, the Predator Helios 300, which lists for the same price but packs a better graphics card. We’ll get into that later though. Let’s dig in.

The Acer Nitro 7 is mercifully one of Acer’s simpler lines to navigate, at least at the moment. There are only three variants, running from $1,050 to $1,200.

Our $1,200 review model is probably the best option. You certainly could run a gaming PC with only 8GB of RAM still, but I wouldn’t recommend it. That alone is enough to cut the two lower-end models from the running, especially given their $1,000-plus prices. As I said up top, $50 can be a lot of money when you’re dealing with entry-level laptops—but in this case, I think the extra money is a necessity. If you’re looking to go cheaper than $1,200, take a look at the Nitro 5 line instead.

Acer’s Nitro line is interesting to me. They’re like gaming laptops gone undercover. Not in a convincing way, mind you. Pull out a Nitro 7 at the office and people will be like, “Hey, nice gaming laptop.” You’re not fooling anyone, especially with the weird pentagonal shape of the base and lid.

That said, the Nitro 7 is a bit more restrained (and refined) than Acer’s Predator line. The chassis is solid black, without the Predator line’s showy red vent covers and highlights. The lid is a particular high point, brushed metal etched with the Acer logotype and not much else—no “Predator” or even “Nitro,” and certainly not that weird Transformers-looking logo that the Predator laptops use.

It’s a good look for Acer. The Nitro 7’s still a bit aggressive for my taste, and I find the non-standard lid shape particularly questionable. But there’s little else to sneer at. I’m particularly impressed that it comes in under an inch thick, a relative rarity for budget gaming laptops—though it does lead to some thermal throttling, as we’ll see later.

Anyway, we’ve come to the first of Acer’s choices with the Nitro 7: The display. It’s a component most budget laptops skimp on. Nice to have, sure, but it’s a luxury. Given the choice, most manufacturers opt to dump their limited budgets into the internal hardware instead.

The Nitro 7’s 15.6-inch, 1920×1080 IPS screen looks pretty damn good though. Sure, it’s still very much an entry-level display. But viewing angles are fairly wide, color reproduction is surprisingly solid, and the Nitro 7 easily clears the 250-nit floor we use for battery testing. It’s one of the few clear advantages the Nitro 7 has over the Predator Helios 300, which has a notoriously subpar display.

I’ve also been impressed with the Nitro 7’s keyboard. While in most ways it’s just your typical chiclet slab, there’s a generous amount of travel to each keystroke and a crisp, tactile click that makes it a joy to type on. This is a gaming laptop, but I’ve been pretty happy with it for productivity purposes and have written a number of lengthy articles on it this month.

I’m less excited about the touchpad, if only because it abstains from physical mouse buttons. I find that frustrating on any gaming laptop. Theoretically you’d plug in a mouse for any and all gaming, but sometimes you can’t, and the tap-to-click touchpads are all but impossible to use efficiently in those situations. It’s smooth and sensitive though, so a step up from some of the budget models I’ve used.

Ports are fairly standard, though venting on the right face pushes the power input approximately halfway down the side—an odd choice, though not unheard of. Joining it is a single USB 2.0 port and a 3.5mm audio input, while the left side plays host to a USB-C and two USB-A 3.1 ports, ethernet, and HDMI. That’s a pretty generous selection for an entry-level model.

As for the speakers? Best to forget them. I’d say the same of most high-end laptops as well, but the Nitro 7’s built-in audio is strictly for casual web browsing and other such usage. It’s loud but very tinny, and anything more serious than a YouTube video should probably see you reaching for your headphones.

So far so good, yeah? Indeed, the Nitro 7 wins top marks from me for its build quality and its display. It’s clear those are the elements Acer prioritized.

But then we get into performance, and the value proposition gets more questionable—particularly at the $1,200 list price. Again, our Nitro 7 review model came equipped with an Intel Core i7-9750H and an Nvidia GTX 1650, which is an ever-so-slightly improved GTX 1050 Ti.

The CPU’s problem, plain and simple, is throttling. We’ve looked at a few Core i7-9750H laptops at this point, and have reviewed plenty with its predecessor, the 8750H. Point being: We know what to expect. And in short-burst use the Nitro 7 performs mostly as it should, with Cinebench R15 scores in line with our expectations—still slightly below average, but nothing too serious.

HandBrake is another story though. This test is longer and more intensive, tasking the machine with encoding a 30GB MKV file down to HandBrake’s Android Tablet preset, a process that usually takes the 8750H and 9750H around 30 minutes. The Nitro 7 took closer to 37, which doesn’t sound like a huge deal but is a significant outlier across all our 8750H/9750H tests.

The Nitro 7 runs hot. That’s all there is to it. I live in San Francisco, which is lucky enough to have mild temperatures even in the height of summer. Even idling at 7-percent usage, the Nitro 7’s Core i7-9750H sits between 55 and 60 degrees Celsius. Putting it under load, it almost immediately hits its 80-degree-Celsius throttling point and starts impacting performance as a result.

Does it matter much? Probably not. Gaming is not particularly CPU-intensive, nor is browsing the Internet. Chances are, most people buying an entry-level laptop are not doing anything that requires the CPU’s fully optimized potential—though it’s still strange Acer hasn’t equipped the Nitro 7 with some better cooling capabilities.

But no, the Nitro 7’s biggest letdown is the GTX 1650. Let me be clear: There is a place for the GTX 1650 in Nvidia’s lineup. It’s not a bad card, and we recommended plenty of laptops with the its predecessor, the GTX 1050 Ti. It’s a solid entry-level option.

That said, $1,200 is a steep price for a 1650-equipped laptop, as evidenced by our benchmarks. To enable direct comparisons, I’ve included the benchmarks we did with Acer’s Predator Helios 300—which as I mentioned up top, lists for the same $1,200 price but includes a more powerful GTX 1660 (though it was a 1060 at the time of our review).

The difference is immediately noticeable in 3DMark’s FireStrike Extreme benchmark, where the Predator Helios 300 runs laps around the Nitro 7, as does MSI’s GS65 Stealth and its GTX 1660 Ti.

The same pattern is visible in real-world gaming benchmarks, with both Rise of the Tomb Raider and Middle-earth: Shadow of Mordor exhibiting sizable gaps between the Nitro 7’s GTX 1650 and our Helios 300 review model’s GTX 1060. Keep in mind: The current Helios 300 model and its GTX 1660 would put up slightly higher scores than the 1060 we looked at.

There are compromises, of course. The Predator Helios 300 has typically had a dim display, as I mentioned earlier. It also has a smaller 256GB SSD, which is basically useless for any serious gaming at this point (though easily upgraded), is slightly thicker and heavier, and gets worse battery life, as you can see in this chart.

Again, entry-level gaming laptops are a series of compromises, and I’m not sure compromising the graphics card was in Acer’s best interest for what’s ostensibly the laptop’s main mission in life. The Nitro 7 is a well-built machine, but its gaming performance is severely limited, and it’s competing dollar-for-dollar with the bestselling gaming laptop on Amazon—which is Acer’s own, better-equipped model.

That makes the Nitro 7 an interesting alternative for the buyer-on-a-budget who’d rather have a better display and more attractive design, or is perhaps afraid of upgrading their own storage. But for most people? The Predator Helios 300 is probably the better option. It puts the money where it matters, and cuts corners where you’re less likely to notice—or at least less likely to feel hemmed in.

That said, Acer’s got plenty of room in its lineup for alternatives. As I said up top, the Nitro 7 is probably the right choice for someone. It’s not the most efficient setup, and personally I’d rather spend my money on better performance. But you could be perfectly content with a Nitro 7. For every cut corner, there’s a place where the Nitro 7 shines—and often, it’s in the areas you’d least expect a budget laptop to do so.

Is it going to be a breakout hit, like the Predator Helios 300? No—but then, few entry-level laptops are. It’s hard to stand out, when every dollar counts, and there’s no shame in Acer’s playing second fiddle to itself. That’s a problem I’m sure other manufacturers would love to have.