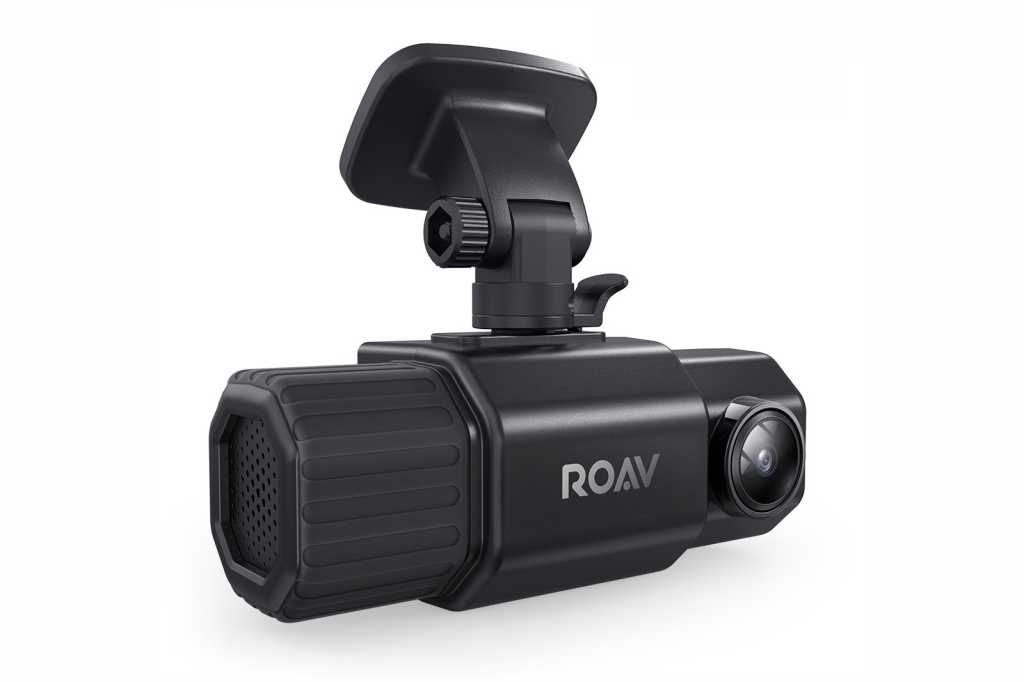 Roav
At a Glance

The Roav DashCam Duo might well have contended for the top spot with a larger supercapacitor and a bit better infrared coverage. It’s still a good choice for those that want an front/rear camera with excellent captures that’s easy to use.

The Anker Roav Dash Can Duo (available on Amazon) is a very capable front/interior dash cam that takes some of the best video I’ve seen. Exceptionally easy to use, it also has a GPS receiver to record your location, and it enhances interior night captures with infrared. The only downside is that the unit won’t capture after 12-volt power is removed, as occasionally happens in an accident.

The Roav DashCam Duo features dual 1080p cameras: one fixed, facing forward with a 150-degree field of view, and the other facing the interior with a 110-degree field of view. The interior camera rotates vertically, but not side to side or diagonally, as does the recently reviewed Z-Edge F1 with its eyeball socket. That makes it slightly less versatile, but I had zero issues with the coverage, at least during the day.

The infrared lighting comes courtesy of four bulbs at the corners of the interior camera lens, but like the F1 it’s rather directional. It will spread with distance, so do some experimenting at night with the infrared before you commit to a mounting location with the adhesive mount. I was never able to adequately cover the front seats in my small car.

Note that Roav had not gotten back to me as to the availability of a suction mount at the time of this writing.

There’s a 1.5-inch color display on the back of the DashCam Duo, with four buttons on the bottom of the unit that are used to navigate the menus shown on said display. There’s a GPS receiver on board, and Roav embeds the info into the video stream. You can download the GPSMultimediaPlayer app for the Roav Web site to view the video, track your progress on a map, and see various parameters such as speed and location. The GPS coordinates are not watermarked visually, as you can see below.

There’s a parking mode, waking only to a disturbance to the g-sensor, but interestingly, you have to confirm that you have a constant power supply (I recommend an OBD-II adapter) attached before you can enable it. I’m not sure why, as the camera won’t stay on without a constant source of power.

Which brings me to what I consider the one real Roav mis-step: a supercapacitor that lasts only long enough to save whatever you’ve been recording. This won’t be an issue in the vast majority of incidents, but if a severe impact kills the 12-volt, you won’t capture anything after that.

There’s no bad driver tech on board the DashCam Duo, other than an alert that will sound every 1 to 4 hours just to keep you on your toes. i.e., awake.

I was impressed with the DashCam Duo’s captures on the whole. However, the interior night coverage of the front seats by the infrared was a little narrower than even the Z-Edge F1, and a lot narrower than the Akaso Trace 1. Part of the issue on the driver’s side may have been the display housing partially blocking the infrared in that direction. Coverage of the rear seats, which is the most important issue for most pros, is fine.

Daytime video is nicely saturated (colors were nice), with good detail and decent motion compensation. There were some judder artifacts with pans (when you’re turning a corner at speed for instance), but they are relatively minor and I didn’t find them annoying.

Night captures with only city lighting showed a nice amount of detail in the areas surrounding the vehicle, while not suffering too much from headlight flare.

You can see the issue with the infrared lighting I described in the capture below. Had I seen this before mounting the unit with its semi-permanent tape, I would’ve moved it lower and further forward.

While the interior night captures were a slight disappointment, overall the DashCam Duo’s video is top-notch, and with the embedded GPS, handy indeed for logging your travels.

The DashCam Duo runs a lot cooler than some dash cams and has a wide operating temperature range: -4 to 158 degrees Fahrenheit.

Not the best, but still nice

The Roav DashCam Duo might well have contended for the top spot with a larger supercapacitor and a bit better infrared coverage. It’s still a good choice for those who want an front/rear camera with excellent captures that’s easy to use.