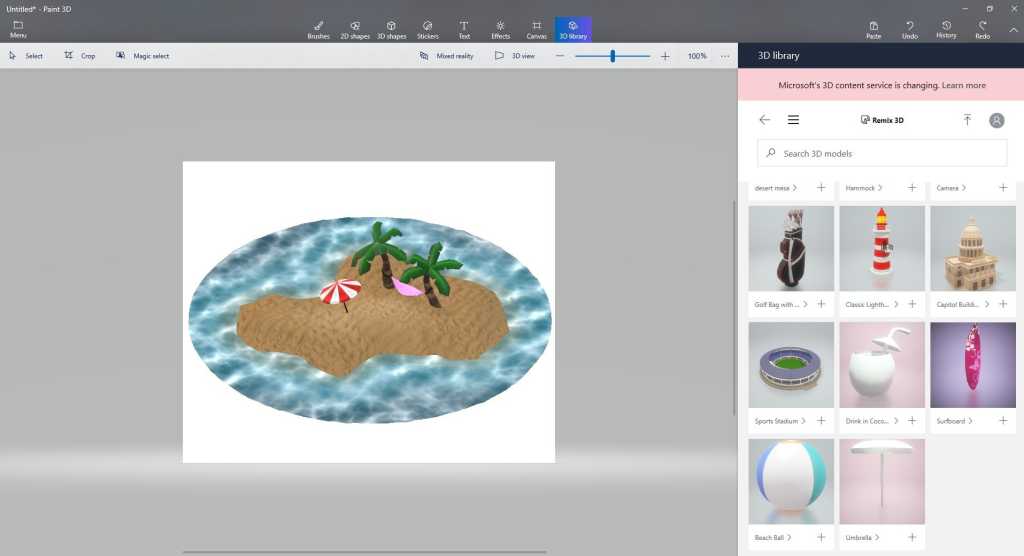 Editor’s Note: This story was originally published on July 10. Microsoft said Thursday that the Remix3D.com online repository will shut down on Friday, Jan. 10. This story has been slightly edited to reflect that.

Microsoft has scheduled Paint 3D’s Remix 3D archive for termination—and if you don’t know what that is, then you probably were one of the many who ignored both apps.

Twitter users WalkingCat and developer Rudy Huyn originally unearthed what appears to be plans to shut down the Remix 3D database of user-created 3D art by January 2020. Microsoft has since confirmed it within the Windows 10 Paint 3D app. (If you haven’t heard of Remix 3D, don’t worry—that’s apparently why it’s being discontinued.)

“Microsoft is retiring the Remix3D.com site on January 10, 2020,” according to a note within the app. “We advise all users who want to keep their uploaded content to take action and download their existing Remix3D.com 3D models to other file storage and sharing platforms as soon as possible, as Remix3D.com will no longer be available after this date.”

“While Microsoft will no longer be supporting Remix3D.com as of January 10th, customers will still be able to enjoy 3D capabilities either through the first party published models within various apps or by using their own 3D created objects in their content,” a Microsoft representative added in an emailed statement.

Instead, Microsoft recommends that users download 3D objects to OneDrive, where they can share them with other users by providing them with a link.

What is Paint 3D?

Paint 3D is essentially a beefed-up version of the existing Paint app within Windows 10, though it’s used to create three-dimensional scenes as opposed to 2D art. It’s a much more powerful tool than Paint, though without the older app’s immediacy and simplicity. (We wrote an in-depth tutorial for Paint 3D in 2017, when it was one of the centerpieces of the Windows 10 Creators Update). Paint 3D scenes and objects can be stored within the Remix 3D archive, which also serves as a source of third-party created 3D objects and other art that can be imported into your Paint 3D scenes.

It’s the latter repository that’s headed to the digital graveyard, though you might not know it. Even if you use Paint 3D, Microsoft annoyingly refers to Remix 3D as the “3D library” in the Paint 3D interface.

It’s fair to argue that Microsoft’s mixed-reality ambitions landed with a thud, but the apps involved—Paint 3D, Mixed Reality Portal, and the optional 3D Builder app—still represent some of the most creative opportunities within Windows. Paint 3D still appears to be actively developed: The latest feature is a “tube extrusion” model, which allows you to create pipes and other long, 3D cylinders within your digital model.

Microsoft could do more with Magic Select

There’s one really useful feature within Paint 3D that deserves more recognition, and now might be the time to highlight it further. Magic Select is essentially Adobe PhotoShop’s Magic Wand tool within Paint 3D—a way to intelligently guess which part of an image you want to extract and paste somewhere else. You can snip out an unwanted bystander from a photo, and Paint3D will “fill in” the background. Magic Select uses AI to “know” where the unwanted object ends and the other begins.

Unfortunately, Magic Select is trapped within the Canvas section of Paint 3D, which is a shame considering how useful it could be in other apps. Photos already creates fairly sophisticated tools to polish a photo, for instance, so Magic Select would seem like a natural addition to it. Here’s hoping that whatever happens to Paint 3D, Magic Select will somehow live on elsewhere.

This story was updated at 5:26 PM with additional details.